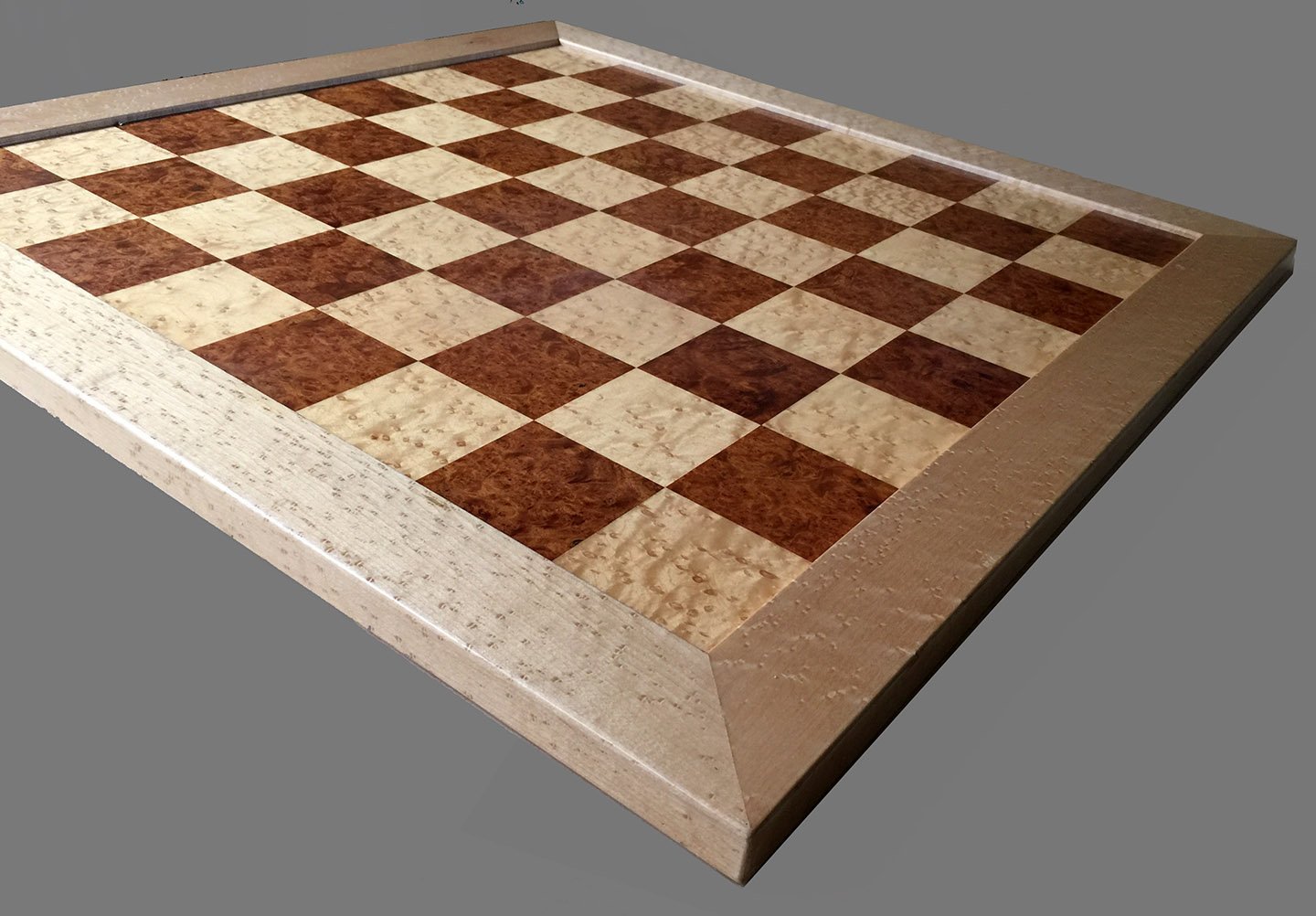 A large Amboyna Burl Signature Traditional Chessboard with 3-1/8″ squares of Amboyna Burl and Birdseye Maple with a solid Tiger Birdseye frame, Ebony. The chessboard  measures 30-1/2″ square. This Signature Traditional Chessboard was designed  by Frank Camaratta. The chessboard is in like new condition. The board is designed to handle Chess Sets with a 2-1/4″ to 2-1/2″ King’s base diameter.

Amboyna is technically not a distinct species, but is the name of the burl wood from any of the Pterocarpus species. Most commonly this is Narra (Pterocarpus), but burl sections of Burma Padauk (Pterocarpus macrocarpus)  are also sold under the name Amboyna. The name is derived from Ambon Island in Indonesia, where much of the figured wood is believed to have been initially exported.

Amboyna is among the most expensive and sought-after of all burls, and is frequently sold as veneer or as small turning/craft blanks. Some suppliers specify “Red Amboyna” for material with the typical rich reddish-brown heartwood, or “Golden Amboyna” for pieces with lighter yellowish brown coloration. It’s not unusual for pieces to contain sharply contrasting yellowish sapwood. Aside from Chessboards, Amboyna is commonly used for fine furniture, boat building, turned objects, electric guitar tops, knife/gun grips, and other small specialty wood items. High-grade Ambyona burl ranks as one of the most expensive woods in the world. For more technical information on Amboyna, visit http://www.wood-database.com/amboyna/.

The famous Birdseye Maple of the Sugar Maple, used for the frame and squares of this chessboard, superficially resembles the wood of a burl, but is something else entirely. Birdseye Maple is not a distinct species of Maple, but rather, it’s a figure that’s occasionally found in Acer saccharum (Sugar Maple) trees. The eyes reportedly caused by unfavorable growing conditions for the tree. The Maple attempts to start numerous new buds to get more sunlight, but with poor growing conditions the new shoots are aborted, and afterward a number of tiny knots remain.