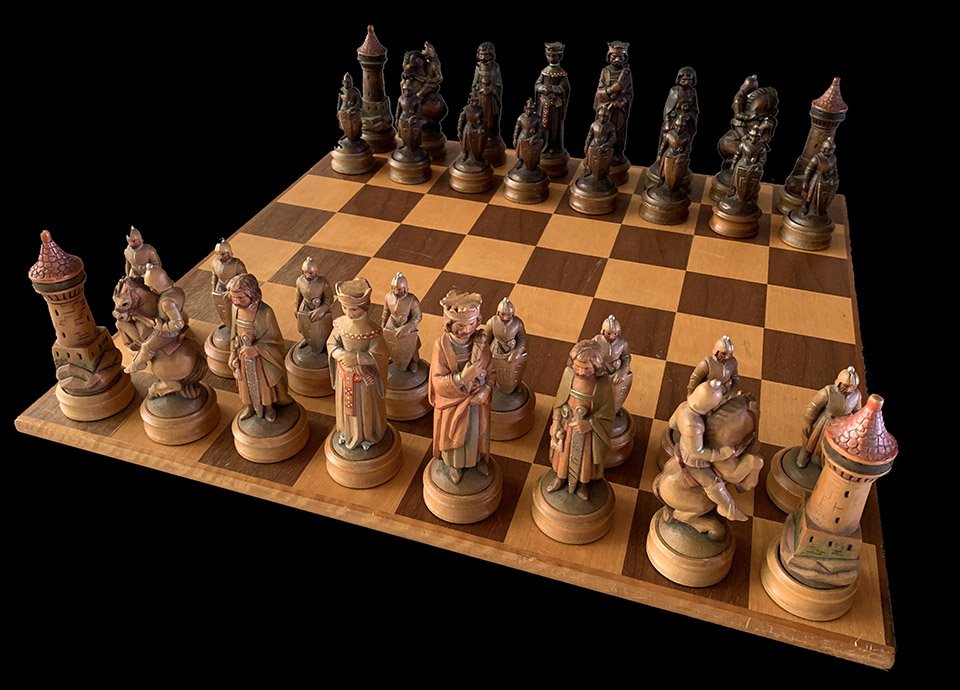 Offered here is a beautifully hand-carved and hand-painted figural Anri King Arthur Chess Set, housed in a finely crafted wooden case with fold-out compartmented trays to secure the chessmen. The King stands 4-1/4″ tall. Severn of the chess pieces still have their Anri lozenges under their bases. These chess pieces are design 71800/K.The chessmen are reminiscent of figurines found in Gothic Cathedrals. Each of the chessmen is magnificently hand-carved and painted. The finely hand carved pieces from the Anri King Arthur Chess set are crafted from alpine maple and are hand-painted and gilded, the bases are lightly weighted and the pieces are felted. This set is one of the most copied of all the Anri designs. Versions have been reproduced in ivory, wood, plastic, metal and resin. Some of the copyrights were sold by ANRI, others were simply stolen. Anri chessmen are 100% made in Italy for those who can appreciate the true value of these magnificent artistic chessmen. The chessmen and case are in excellent condition. Anri Arthur chess sets were produced between 1954 and 1993. The Anri chessboard shown is not included, but can be purchased separately here. To see our extensive selection of antique and contemporary chessboards, click here.

King Arthur was a legendary British leader who, according to medieval histories and romances, led the defense of Britain against Saxon invaders in the late 5th and early 6th centuries. In some Welsh and Breton tales and poems, Arthur appears either as a great warrior defending Britain from human and supernatural enemies or as a magical figure of folklore, sometimes associated with the Welsh otherworld. The details of Arthur’s story are debated and disputed by modern historians.

One school of thought, citing several sources, sees Arthur as a genuine historical figure, a Romano-British leader who fought against the invading Anglo-Saxons some time in the late 5th to early 6th century. The Historia Brittonum, a 9th-century Latin historical compilation contains the first datable mention of King Arthur, listing twelve battles that Arthur fought. These culminate in the Battle of Badon, where he is said to have single-handedly killed 960 men.

The other text that seems to support the case for Arthur’s historical existence is the 10th-century Annales Cambriae, which also links Arthur with the Battle of Badon. The Annales date this battle to 516–518, and also mention the Battle of Camlann, in which Arthur and Medraut (Mordred) were both killed, dated to 537–539. These details have often been used to bolster confidence in the Historia’s account and to confirm that Arthur really did fight at Badon.

There are many elements and incidents that are now an integral part of the Arthurian story, including Arthur’s father Uther Pendragon, the magician Merlin, Arthur’s wife Guinevere, the sword Excalibur, Arthur’s conception at Tintagel, his final battle against Mordred at Camlann, and final rest in Avalon. The 12th-century French writer Chrétien de Troyes added Lancelot and the Holy Grail to further enliven the legend!. for more information on the King Arthur legend, look here.