Offered here is a beautifully hand-carved Anri Mediolanum Chessmen, “Old Version”, Catalog #718-120. The chessmen represent Medieval figural busts atop slender pedestals. Each of the chessmen is left in its warm natural wood finish. The King stands an 3-7/8″ tall with a 1-1/4″ base diameter. The Black King still has the two Anri labels affixed to the base. The finely hand carved pieces from this Anri Mediolanum Chessmen are crafted from alpine maple, the bases are weighted for stability and the pieces are felted. The chessmen are housed in their original tan, two-tray, fitted cardboard display case with “Thule” imprinted in gold on the lid. Anri chessmen are 100% made in Italy for those who can appreciate the true value of these magnificent artistic chessmen. The Anri Mediolanum chessmen are excellent and were first produced in 1966.

A Little Background about Mediolanum. Mediolanum (or the Roman Mediolanum), the ancient Milan, was originally an Insubrian city, but afterwards became an important Roman city in northern Italy. Mediolanum appears to have been founded around 600 BC by the Celtic Insubres, after whom this region of northern Italy was called Insubria. According to the legend reported by Livy, the Gaulish king Ambicatus sent his nephew Bellovesus into northern Italy at the head of a party drawn from various Gaulish tribes; this Bellovesus was said to have founded Mediolanum. The Romans, led by consul Gnaeus Cornelius Scipio Calvus, fought the Insubres and captured the city in 222 BC; the chief of the Insubres submitted to Rome, giving the Romans control of the city. In Gaulish *medio- meant “middle, center” and the name element -lanon is the Celtic equivalent of Latin -planum “plain”, thus *Mediolanon (Latinized as Mediolanum) meant “(settlement) in the midst of the plain”. 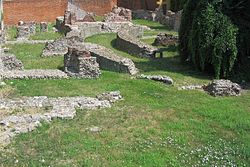 Shown are the ruins of the Emperor’s palace  in Milan. Here Constantine and Licinius issued the Edict of Milan. Mediolanum was important for its location as a hub in the road network of northern Italy. Polybius describes the country as abounding in wine, and every kind of grain, and in fine wool. Herds of swine, both for public and private supply, were bred in its forests. Excerpted from: https://en.wikipedia.org/wiki/Mediolanum
Thule (A term often used to signify a mythical place) was a far-northern location in classical European literature and cartography. Though often considered to be an island in antiquity, modern interpretations of what was meant by Thule often identify it as Norway, an identification supported by modern theory. Other interpretations include Orkney, Shetland, and Scandinavia. In the Late Middle Ages and Renaissance, Thule was often identified as Iceland or Greenland. Nazi occultists believed in a historical Thule/Hyperborea as the ancient origin of the Aryan race.

A Brief History about ANRI. In the late 19th century Alois Riffeser traveled to the major European cities to sell the wood carved figurines and toys which were bought from the farmers of the Gröden Valley located in the Dolomite region of the Alps. This area in South Tyrol was part of Austria-Hungary at the time until being annexed to Italy in 1919.