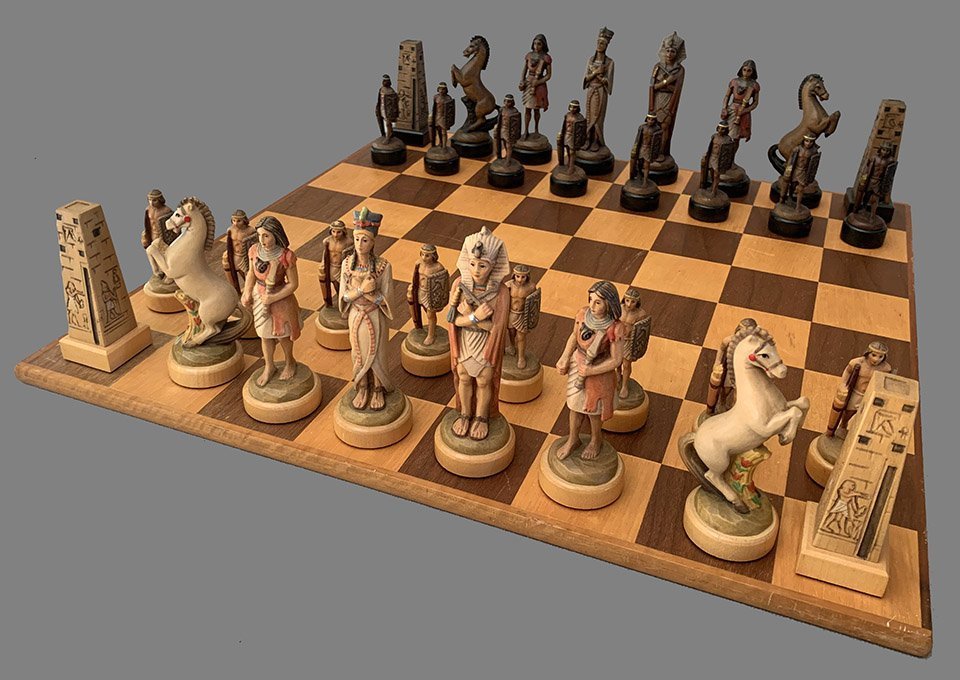 Offered here is a beautifully hand-carved and hand-painted figural Anri Nefertiti Chess set, housed in a finely crafted wooden case with compartmented trays to secure the chessmen. This set of chess pieces is Design #71811/K. The King stands 4-5/8″ tall. The Kings and Queens bear the Anri paper sticker on the underside of their bases. These statuesque chessmen reflect a distinct Egyptian motif. Each of the Anri Nefertiti chessmen is magnificently hand-carved and painted. The pieces of the Anri Nefertiti Chessmen are crafted from alpine maple, the bases are lightly weighted and the pieces are cushioned atop red felt pads. Anri chessmen are 100% made in Italy for those who can appreciate the true value of these magnificent artistic chessmen. The chessmen are in excellent condition. The fitted storage box is not original to the set. It was made by Anri for a different set of chessmen, possibly the Versailles. Anri Nefertiti chessmen sets were produced between 1964 and 1984. The Anri chessboard shown is not included, but can be purchased separately here. To see our extensive selection of antique and contemporary chessboards, click here.

The Queen in this chess set is Nefertiti. Neferneferuaten Nefertiti (c. 1370 – c. 1330 BC) was an Egyptian queen and the Great Royal Wife (chief consort) of Akhenaten, an Egyptian Pharaoh. Nefertiti and her husband started a religious revolution, in which they worshiped one god only, Aten, or the sun disc. With her husband, she reigned at what was arguably the wealthiest period of Ancient Egyptian history. Some scholars believe that Nefertiti ruled briefly as Neferneferuaten after her husband’s death and before the accession of Tutankhamun.

Nefertiti had many titles including Hereditary Princess; Great of Praises; Lady of Grace, Sweet of Love; Lady of The Two Lands; Main King’s Wife – his beloved; Great King’s, Lady of all Women; and Mistress of Upper and Lower Egypt. She was made famous by her bust, now in Berlin’s Neues Museum. The bust is one of the most copied works of ancient Egypt. It was attributed to the sculptor Thutmose, and it was found in his workshop. For further information on Nefertiti, Click here.

The King in the set is Akhenaten, who was originally known as Amenhotep IV. He was an ancient Egyptian pharaoh of the 18th Dynasty who ruled for 17 years and died perhaps in 1336 BC or 1334 BC. He is noted for abandoning traditional Egyptian polytheism and introducing monotheistic worship centered on the solar deity Aten.

Akhenaten was a younger son of Amenhotep III. Modern interest in Akhenaten and his queen Nefertiti comes partly from his connection with Tutankhamun (even though Tutankhamun’s mother was not Nefertiti, but a woman named by archaeologists The Younger Lady) and partly from ongoing interest in the religion he attempted to establish.

There is some controversy around whether Amenhotep IV succeeded to the throne on the death of his father Amenhotep III or whether there was a co-regency lasting as long as 12 years according to some Egyptologists. For further information on Akhenaten, Click here.

The Bishops in the set are modeled as typical religious advisors or maybe the King’s consorts or the Queen’s servants. Knights are represented by rearing stallions. horseback. The Rooks are obelisk-like structures with what appears to be Ancient Egyptian symbolism on their sides, although a true obelisk would likely have a pointed top. Obelisks were thought to have been erected to commemorate a person, or to honor the gods.