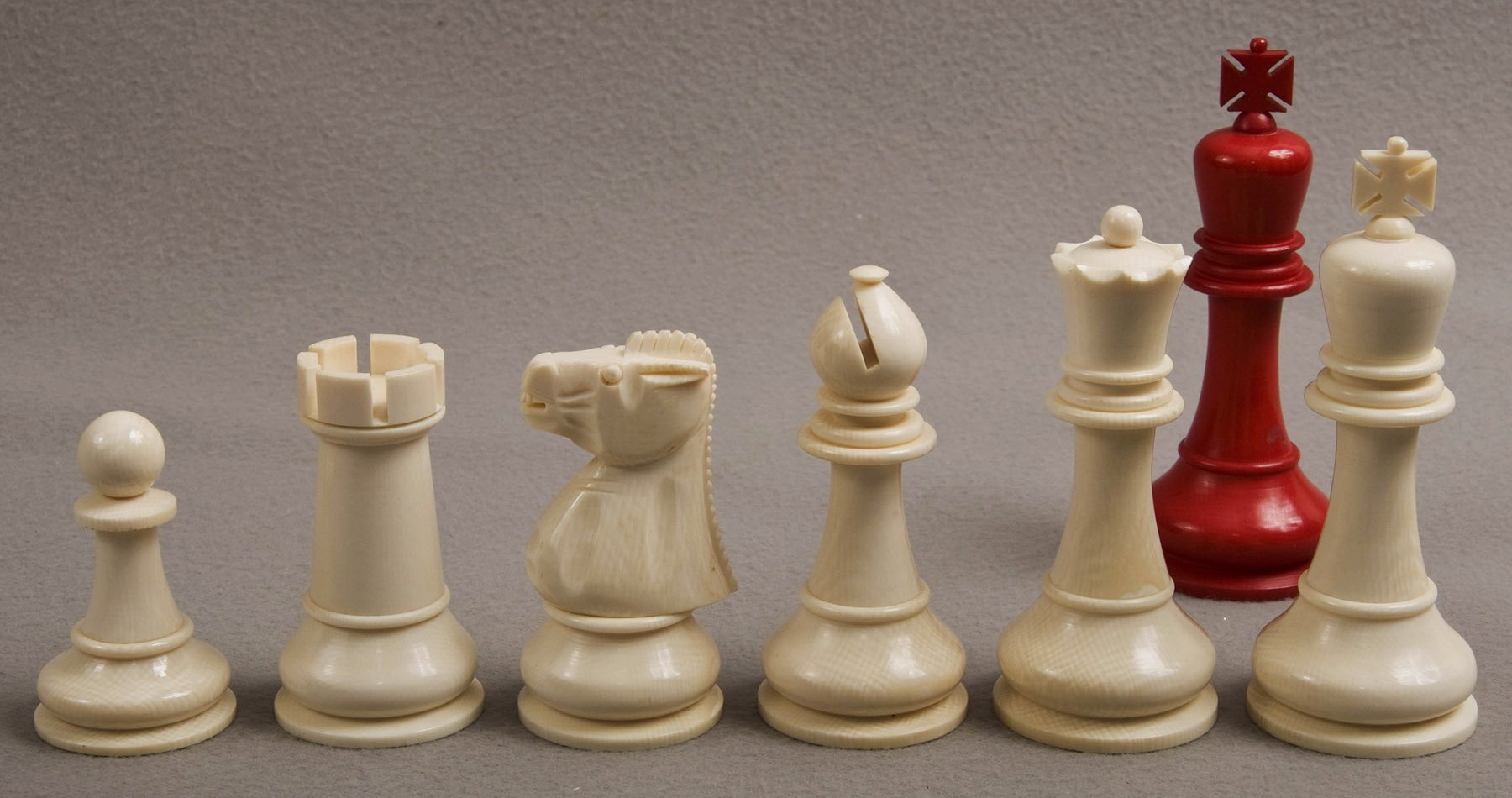 An original Antique Baruch H Wood Staunton Chess Set, natural and red-stained ivory, circa 1935, in new condition. The King stands 3-7/8″ tall with a 1-5/8″ diameter base. The chessmen are in like-new condition. The Antique Baruch H Wood Staunton Chess Set is housed in its original light Oak hinge-top box with “Sutton-Coldfield” imprinted in gold on the lid. The wooden chessmen were designed by Baruch H. Wood and first offered for sale to the general public in September, 1937. These sets were also available in Maracaibo Ebony, manufactured in France and imported by Sutton Coldfield. One such set graces the cover of How to Play the Endgame in Chess by Leonard Barden.

In the September and October, 1937 issue of Baruch Howard Wood’s publication “Chess”, there appeared advertisements for a new, high quality, Staunton chessmen. Shortly thereafter, on May 16, 1939, The Jaques Company issued an injunction to restrain “Chess” from passing off sets of chessman not of Jaques’ manufacture as “Genuine Staunton Chessmen” or as simply “Staunton Chessmen”. The suit was actually more about using the words “Staunton” and “Genuine Staunton” than it was about using the words “Staunton pattern”. Jaques claimed that the words “Staunton” and “Genuine Staunton” meant that the sets were, in fact, made by them. There is some validity to that claim. In the UK, even today, Staunton chessmen were understood to be Jaques chessmen. All others were Staunton type chessmen. The lawsuit concluded with Jaques having sole right to use “Genuine Staunton” but anyone could use “Staunton” or “Staunton Pattern”. The law suit was originally found in Jaques favor, but “Chess” won on appeal. This became known as The Chess lawsuit of a Century.

In 1935, Wood founded the magazine CHESS, which became one of the two leading chess magazines in Great Britain. He edited it until 1988, when it was taken over by Pergamon Press. Wood was the chess correspondent for the Daily Telegraph and The Illustrated London News. From 1948 to February 1967, he was responsible for the chess column of the Birmingham Daily Post. He also wrote a popular and often reprinted book Easy Guide to Chess (Sutton Coldfield 1942), described by Grandmaster Nigel Davies as “one of the best beginners books on the market”. His other books include World Championship Candidates Tournament 1953 (Sutton Coldfield 1954) and 100 Victorian Chess Problems (1972).