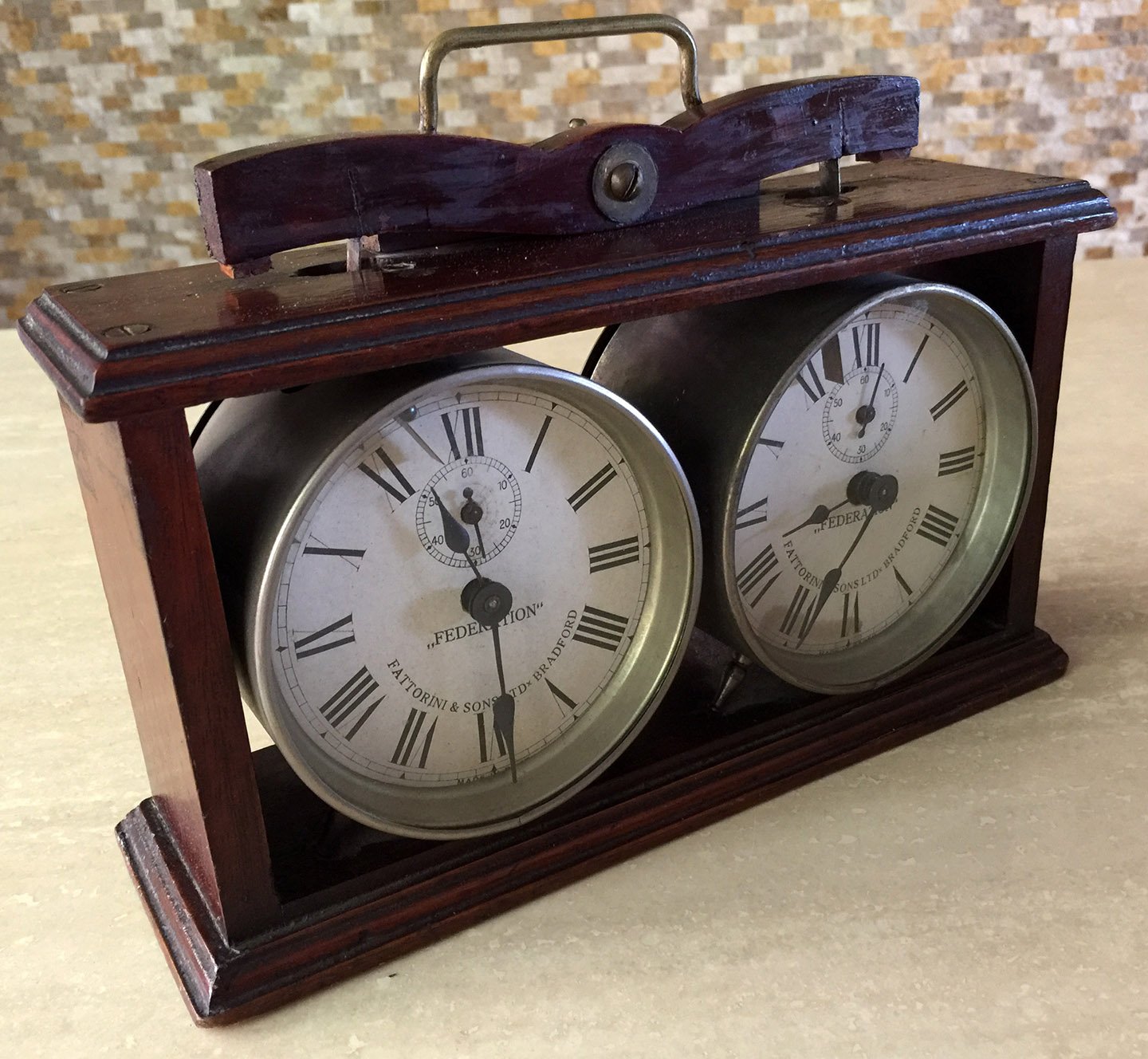 
An Antique Fattorini Chess Clock retailed by Fattorini & Sons Ltd. of Bradford. The clock consists of two cylindrical clocks with wind-up mechanisms, mounted side by side within an open mahogany case The twin dials have Roman numerals, a wooden rocker arm and brass carrying handle. The words “Federation” and Fattorini & Sons Ltd Bradford are printed on the dial face. The clocks are independently started and stopped by pressing the lever arm atop the frame which engages one of the escapements, thus causing that timing mechanism to stop. The case measures approximately 10 1/4″ x 7″ x 3″. The case is in excellent condition with a pleasing patina. Both the movements are also in working order.

The Fattorini & Sons company was a jewellery business established by a family of Italian immigrants headed by Antonio Fattorini. They arrived in the British city of Leeds, in Yorkshire, England  in 1827.   Antonio established a number of retail outlets specializing in jewellery, watches and other fine goods. In the early 19th century, Antonio Fattorini opened a shop in Harrogate to take advantage of seasonal trade in Harrogate in 1831, this business is today owned and run by descendants of the founders. In the 1850s he opened a shop in Bradford with two of his sons. In 1883 the firm made the first ever chess clock comprising two linked pendulum clocks.
One of the branches based in Skipton, Yorkshire set up a dedicated factory in Birmingham to take advantage of the demand for badges and medals to sports clubs. By 1927 this factory was too small and the company relocated to Regent Street Works. The range of products also widened to include sporting cups and trophies, Insignia for Associations, Civic Authorities and National Governments and emblematic jewellery. In 1964 a branch was opened in Manchester initially to do enameling. The Manchester branch grew to become the center for the design, development and manufacture of plastic badges. In the 1980’s the company started to manufacture ceremonial swords for graduation gifts, replicas and parade swords. Today the company exports throughout the world . Mr. Greg Fattorini is the present Managing Director of the company he being the 6th generation of the Fattorini family to manage the business.