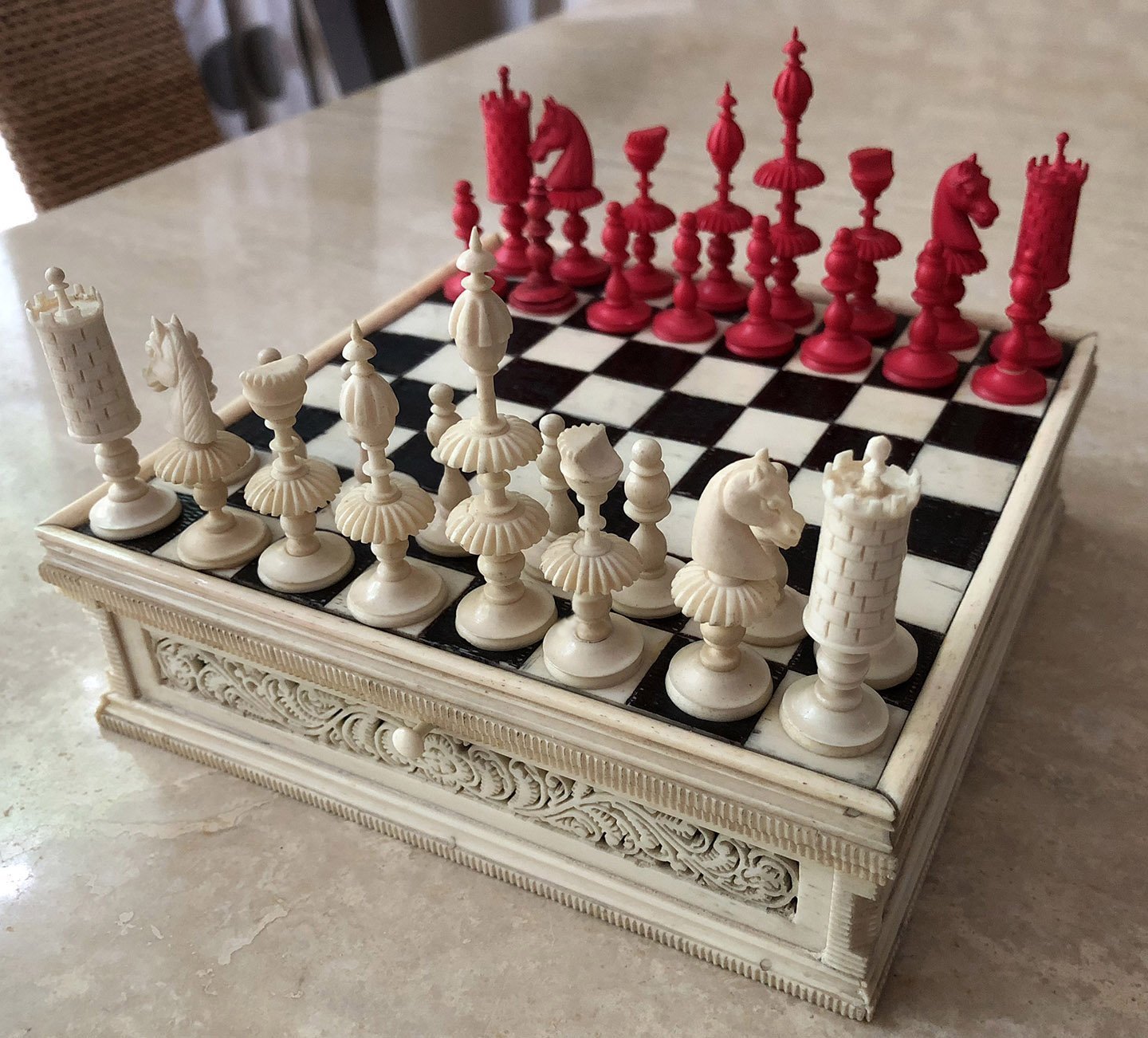 Offered here is an Antique German Miniature Bone Chess Set, natural and red-stained, circa 1840 – 1850.  The King stands 2.4″ tall with a 0.6″ diameter base. The chess pieces have a distinctly Selenus appearance and are housed in an intricately carved bone hinge-top storage box with a chessboard engraved on the lid.  A unique feature of this style of chessmen are the elaborate collars. The chess set is in excellent, condition. One Pawn and one Piece have been expertly restored. The set was produced in Geislingen, Germany, probably during the first half of the 19th century. In Geislingen, there were around 300 turners and carvers producing items for daily use, such as combs, pill boxes, etc., which were fabricated from bone, very rarely ivory. They exported chess sets to France and England which led to the erroneous view that these chess sets came from Dieppe region of France.  The company also made the miniature chess tables and chairs often found in Victorian doll houses.The Selenus style chessmen were also made in Denmark and Switzerland. The standard for these designs included delicate, slender, lathe-turned bodies and bases, fitted with circular tiers resembling crowns. The Kings and Queens were distinguished by height and often the number of tiers.

The Selenus design was named after Gustavus Selenus, a pseudonym of Augustus the Younger, Duke of Brunswick-Lüneburg. Gustavus is a creative anagram of Agustus.  Selenus comes from Selene, Greek goddess of the moon, an obvious reference to Luneburg. In 1616, Augustus (Gustavus Selenus) published the first German chess book,  Das Schach- oder Königsspiel.  In addition to chess instruction, this book contained excellent illustrations of contemporary chess pieces. German chess pieces at the time tended to be slender with stacked floral crowns. The pieces became taller, thinner and more elaborate as time went on. Their floral motif has led to their being known as Garden or Tulip sets. The Selenus pattern sets were manufactured in Central Europe until around 1914. The Selenus design is one of the most elegant of the classical chessmen in use before the standardization of chess pieces ushered in with the advent of the Staunton chessmen. The revolutionary Staunton design was registered by Nathaniel Cooke and launched, in September of 1849 by John Jaques of London.