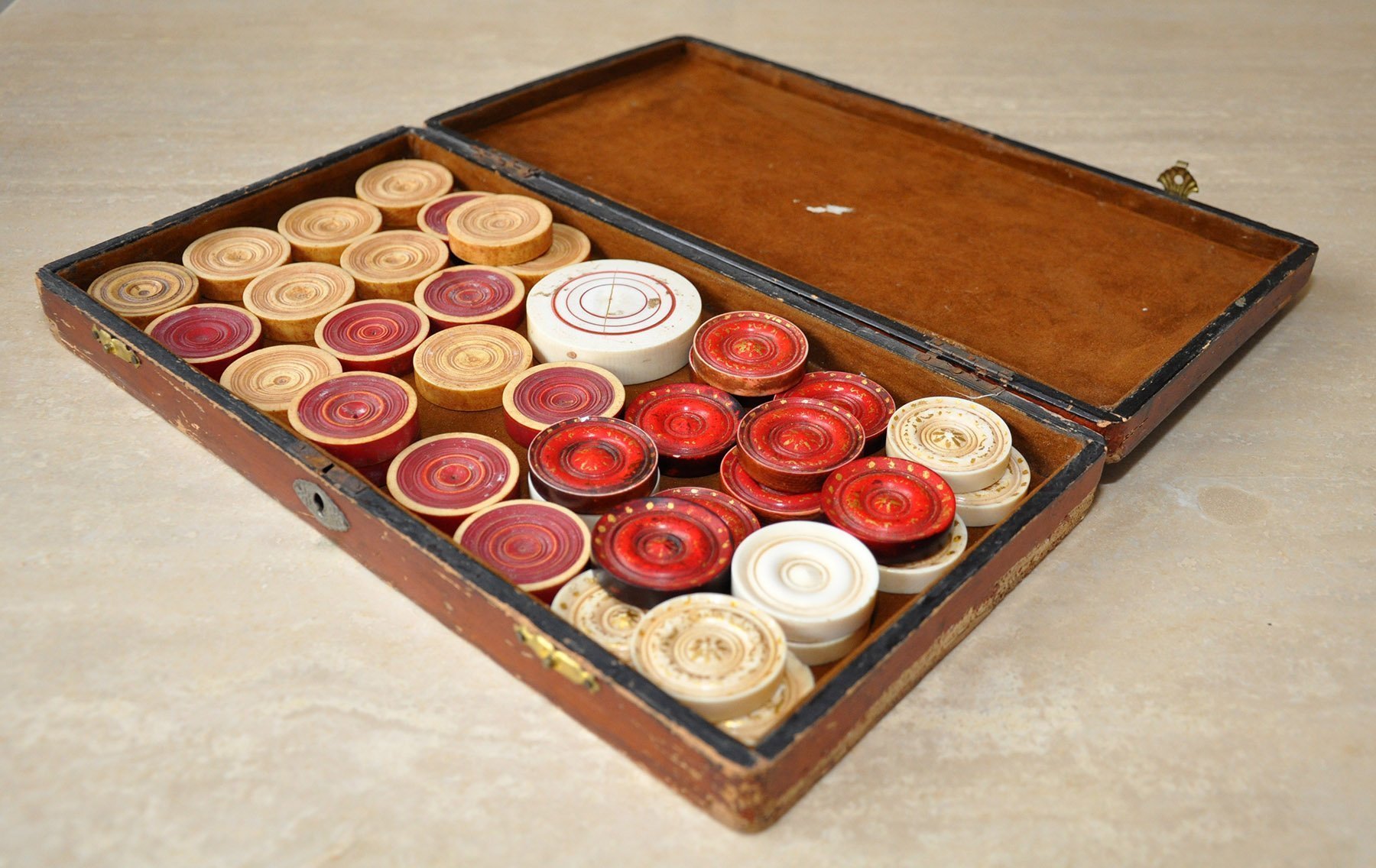 Offered here are two sets of Antique Ivory Carrom Board Game men with striker. The ivory playing discs measure 1-1/2″ in diameter by 1/4″ thick. The large ivory striker measures 2-1/4″ in diameter by 1/2″ thick. Nine natural and ten red-stained ivory playing discs (Carrom men) are adorned with 18 karat gold markings. There are also ten natural and nine red-stained unadorned stones. The game pieces date to around 1850. The game pieces are housed in a flat, Asian-themed painted and lined wooden box. The box contains a backed and laminated Carroms advertisement. There is no Carrom game board.

Carrom is a “strike and pocket” table game of Eastern origin similar to billiards and table shuffleboard. It is found throughout the East under different names though most non-eastern people know it by the East Asian name of Carroms. It is very popular in Nepal, India, Pakistan, Bangladesh, Sri Lanka and surrounding areas and in the Middle East as well. In South Asia, many clubs and cafés hold regular tournaments. Carrom is very commonly played by families, including the children, and at social functions. Different standards and rules exist in different areas.

The objective of play is to use a striker disk with a flick of the finger to make contact with and move lighter object disks called carrom men, which are thus propelled into one of four corner pockets. The aim of the game is to pot (or pocket) one’s nine carrom men and the Queen before your opponent.

The game is usually played on a board made of plywood. The dimensions of the standardized game is a 29 inches square playing surface on a board of lacquered plywood or compatible surface. The edges of the playing surface are bounded by bumpers of wood, and the underside of each pocket is covered by a net.

Carrom men and two strikers, arranged at the start of a game

Carrom is played using disks known as carrom men. The pieces are also known as seed, coin or Pawnpuck. Carrom men are designed to slide when struck and are made with a smooth surface that allows contact with the board when the pieces are laid flat. They are struck by a Striker of standard specification which is larger and heavier. Carrom follows similar “strike and pocket” games, like pool, with its use of rebounds, angles and obstruction of opponent’s pieces.

The odd colored disk is called the queen. The queen is the most powerful carrom piece. During board setup, it is placed at the center of the circle. Ppocketing the queen adds 3 points to the player’s total score. The dimensions of the queen must be the same as those of other carrom men. These rules apply.