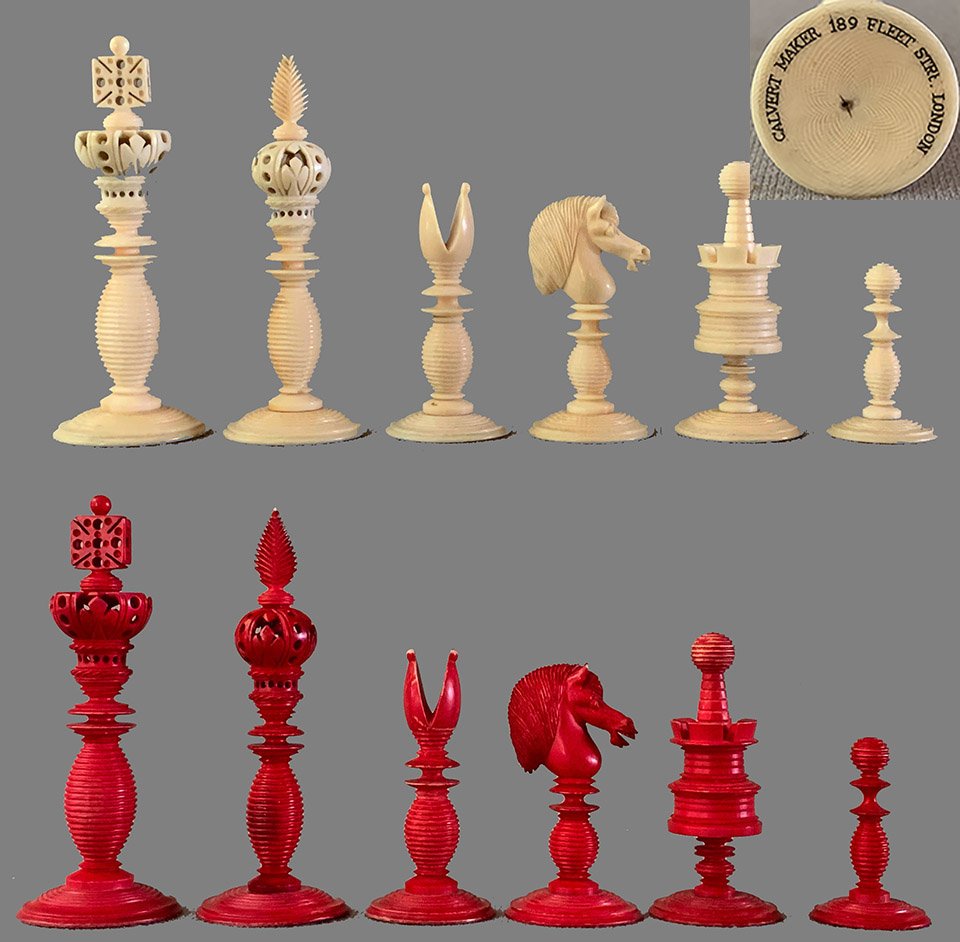 Offered here is a superb set of Antique Lund Open Crownwork Chessmen, natural and red stained, probably produced around 1830. The King stands 3-3/4″ tall with a 1-1/2″ diameter base. The chessmen feature open crown-work on the Kings and Queens, a Maltese Cross and a feather finial atop the King and Queen. The Rooks are pedestal mounted reeded towers. The minor pieces pieces and Pawns have headpieces mounted atop reeded baluster stems. Although this Lund Open Crownwork Chessmen design is often attributed to Samuel Fisher, the extraordinary workmanship is typical of the work of William Lund, who also produced this chess set pattern for sale under his own name from his workshops at 24 Fleet Street. Similar sets were also made by John Jaques among others. A page from the 1860 Jaques Pattern book shows a set of very similar design. These chessmen play and display best on a chessboard with 2-0″ to 2-1/4″ squares. The chessmen are in immaculate condition with original cochineal red stain color still strong. The chessboard shown is not included, but a suitable chessboard can be found elsewhere on this site.

This set of Lund Open Crownwork Chessmen, like a few others sets we have seen, is stamped “Calvert, 189 Fleet Street, London”.  A true Calvert stamp, shown here on the right,  is engraved on the bottoms of the Rooks (sometimes also found on their summits), not under the Kings and not in the circular pattern exhibited on the King in this set. Apparently, some unscrupulous dealer or restorer, unfamiliar with these sets, tried to pass this off as a John Calvert set. The irony is that the set offered here is a true Lund. It didn’t need to have counterfeit lettering engraved under the King’s base.  Although the King is stamped Calvert, the unmistakable Knight carving and pedestal-mounted Rooks clearly marks this as a product of William Lund. Calvert  chess sets, on the other hand, typically featured full tower Rooks and a different Knight style.

Samuel Fisher, at 188 Strand, first shows up in the London directories in 1839 (as a dressing case maker), and continued through at least 1899. In 1882, the listings changed to Fisher & Son. Although it is generally assumed that Fisher was solely a retailer, he is curiously listed as an ivory Turner in the 1865 and 1869 trade directories, although no other references corroborate this. The Fisher firm sold all kinds of items, not just dressing cases and needles, but also billiard tables, stoves, trunks, travelling bags, scissors, Nuremberg caskets, lamps, and flasks.

The premises of Samuel Fisher could be found on the corner of Arundel Street and the Strand. Arundel Street was built in 1678 on the site of the demolished Arundel House. The picture on the left shows the shop as it was in 1851, next to the entrance to the Crown and Anchor Tavern.

Samuel Fisher was a young man from the parish of Saint John, Hampstead. He first appears in the records in 1837 when he marries Mary Smith of St. Clement Eastcheap. An advertisement in The Graphic mentions the establishment of the firm in 1838. This corresponds with what is known of the previous occupant, Francis Szarka, who left in 1838 after the expiration of the lease. The 1841 census shows the couple at 188 Strand. In various directories and advertisements Samuel Fisher is referred to as a cutler. Samuel died on 9 March 1890 at 10 Anerley Park in Surrey. An interesting short history of the Fisher firm can be found here.

John Calvert. The workshop of John Calvert was located at 189 Fleet Street, where he operated his business between 1790 until his death in 1825. He was awarded the title Master of the Worshipful Company of Turners in 1819. After his death, the business was continued by his widow, Dorothy, until around 1840.