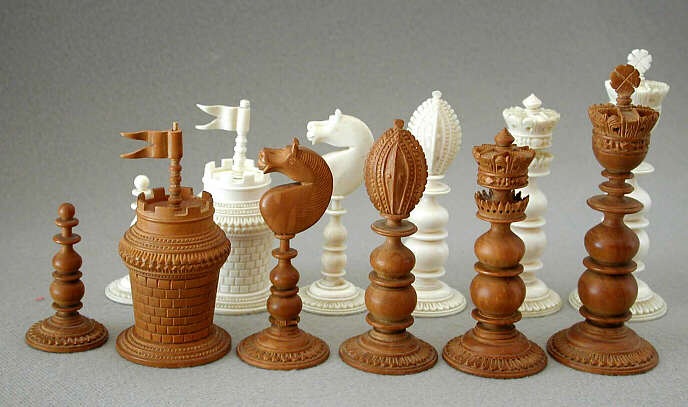 A large, elaborately carved, antique Vizagapatam Chess Set, Ivory and Sandalwood. These vintage chessmen are housed in what is believed to be its original inlaid ivory and Sandalwood box. The King stands 4-1/4” tall. Circa 1840.  The set was made by the East India John Company in Vizagapatam region of India being one of the finest areas of its time for ivory carving and elaborate inlay work. All pieces carved with elaborate foliated decoration, bishops with pierced miters, knights as unadorned horse heads. The Rooks are rusticated towers surmounted with flags.

Visakhapatnam (or, phonetically, Vizagapatam) is the largest city, both in terms of area and population in the Indian state of Andhra Pradesh.The city is nestled between the Eastern Ghats mountain range and the Bay of Bengal, and is often known as The Jewel of the East Coast, The City of Destiny and the Goa of the East Coast.

Visakhapatnam’s history stretches back to the 6th century BC. Archaeological records suggest that the present city was built around the 11th and 12th centuries. Conquered by the Mughals in the 16th century, European powers eventually set up trading interests in the city, and by the end of the 18th century it had come under French rule. Control passed to the British in 1804 and it remained under British colonial rule until India’s independence in 1947.