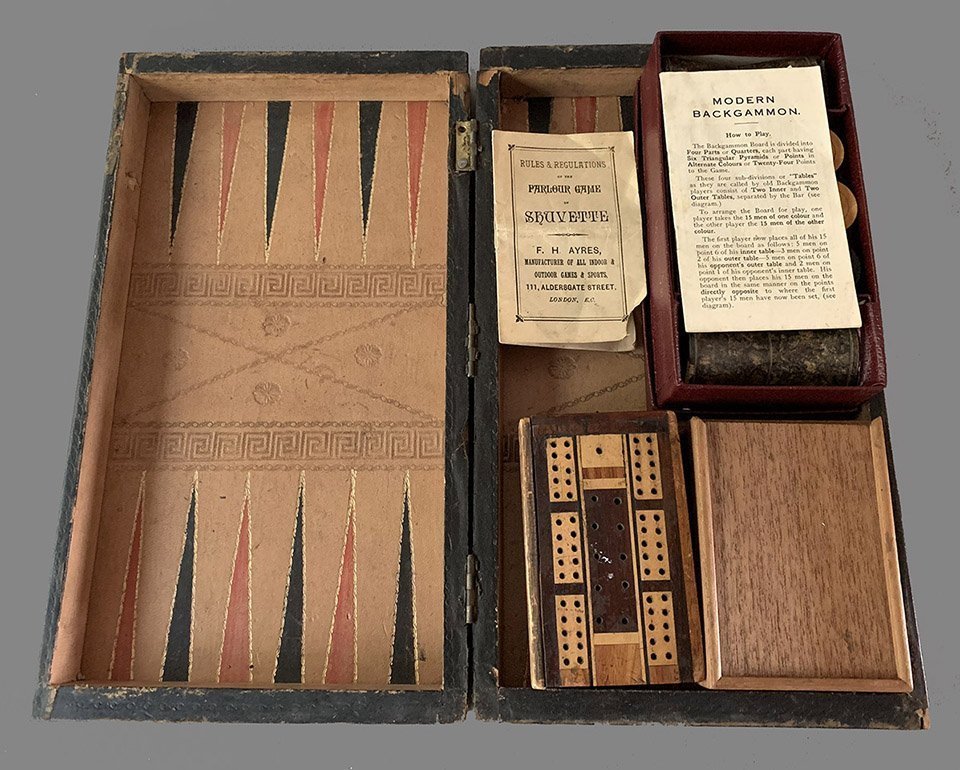 A rare example of a Victorian F. H. Ayres Games Compendium consisting of a complete set of Boxwood and Ebony Backgammon checkers with shaker, doubling cube and instruction booklet. Also included are two small sets of Boxwood and Ebony chessmen, one Saint George and one Staunton, a folding Cribbage board, and a second set of boxed Boxwood and Ebony Draughtsmen. Both chess sets have several damaged pieces. The folding Ayres Games Compendium measures 17-1/2″ x 15″ opened. The Game Box is in the form of a book when closed. The words “English Games” is printed in gold along the spine. The F. H. Ayres name is stamped along the inside edge of the Backgammon board. The 120 year-old Game Board/box is in rather tattered condition. Also included is a rules booklet by F. H. Ayres for the Parlour Game Shuvette with an incomplete set of Barrel-shaped boxwood and Ebony stones for playing the game. There are 10 Ebony Stones and 9 Boxwood stones. One Boxwood stone is missing. Shuvette is reminiscent of a miniature version of our modern game of Shuffleboard.

F.H. Ayres was an English sports and Games manufacturer and retailer dating back to 1810, doing business in Aldersgate in the city of London. It is known from various ads that they produced and sold Chess sets of various quality and styles. However, despite putting their name on most of their other products, they never put their name on their chess sets. This has led to a real problem of identifying which style Staunton chessmen they did produce and whether they sold them at the retail level or only wholesale to retailer or other manufacturers. A report in the June, 1895 issue of Strand Magazine, by William G. Fitzgerald, documents visits to several London firms that made sporting goods. The visit to F. H. Ayres takes up most of the space in the article. The article contains many images, though not actual photographs, but ‘half-tone’ images. Information on the British Chess Company can be found here and in the following article.

All this has led to a running debate – What is an Ayres Chess set? The argument in favor of Ayres goes something like this. “Ayers made wooden chessmen. This is a set of wooden chessmen. ergo, Ayres made these chessmen. other than that argument, nothing more substantive has been put forward supporting the thesis that these sets were made by F. H. Ayres. The image to the left is from an Ayres ad for their Staunton chessmen. Compare this image with the chessmen offered here and elsewhere, claiming to be made by F. H. Ayres. It is not very convincing.