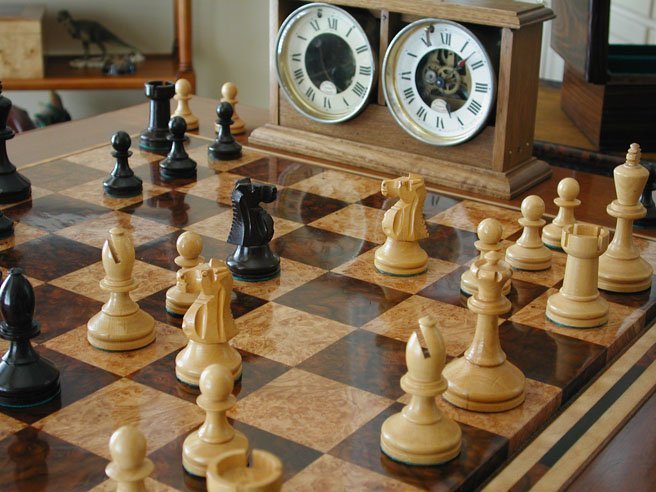 Offered here is an original set of Baruch Harold Wood Chessmen, Boxwood and Brown Ebony (Maracaibo), in excellent condition. The King stands 3-1/2″ tall with a 1-3/4″ diameter base. These vintage chessmen have very broad bases to enhance their stability during play.  The chessmen are housed in their original lightly stained whitewood slide-top box. This is set #5V shown in the original Chess advertisement. The chessmen were designed by Baruch H. Wood and offered for sale to the general public in the Fall of 1937. Several pieces from one such set of Baruch Harold Wood Chessmen graces the cover of How to Play the Endgame in Chess by Leonard Barden. The chessmen offered here are in excellent condition and have the same wood tone as the set shown on the accompanying cover photograph. The chessmen were manufactured in France and imported by Sutton Coldfield. These sets were also available in ivory.

In the September and October, 1937 issue of Baruch Howard Wood’s publication “Chess”, there appeared advertisements for a new, high quality, Staunton chessmen. Shortly thereafter, on May 16, 1939, The Jaques Company issued an injunction to restrain “Chess” from passing off sets of chessman not of Jaques’ manufacture as “Genuine Staunton Chessmen” or as simply “Staunton Chessmen”. The suit was actually more about using the words “Staunton” and “Genuine Staunton” than it was about using the words “Staunton pattern”. Jaques claimed that the words “Staunton” and “Genuine Staunton” meant that the sets were, in fact, made by them. There is some validity to that claim. In the UK, even today, Staunton chessmen were understood to be Jaques chessmen. All others were Staunton type chessmen. The lawsuit concluded with Jaques having sole right to use “Genuine Staunton” but anyone could use “Staunton” or “Staunton Pattern”.The law suit was originally found in Jaques favor, but “Chess” won on Appeal. This became known as The Chess lawsuit of a Century.

From 1946 to 1951 B. H. Wood was president of the ICCA, a forerunner organization of the International Correspondence Chess Federation. Wood was a FIDE Judge, an international chess arbiter, and the joint founder of the Sutton Coldfield Chess Club. Wood represented England when it joined FIDE, the world chess federation. He was longtime President of the British Schools Chess Association and also of the British Universities Chess Association.