Offered here is a very large and unusual Antique Bronze Xiang set, also known as Xiang Qi and Chinese Chess, dating uncertain. The 32 individual bronze Xiangqi pieces measure 1-7/8″ in diameter by 3/8″ thick. Each of the chessmen are identified by Chinese calligraphy engraved on  one side and the pictorial character it represents on the obverse. The coins are extremely well struck with age-expected wear on the side with the pictorial representations. The Bronze Xiangqi set is housed in a replacement box and does not include a chessboard, although these are easily acquired. 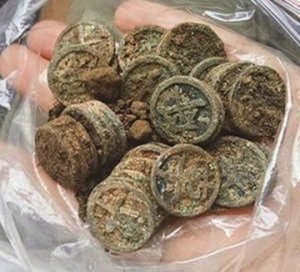 In the ancient city Chengdu, the provincial capital of Sichuan, 30 bronze Chinese chess pieces were recently unearthed from a tomb dating back to the period between Tang and Song dynasty a thousand years ago. Note their similarity to the chessmen offered here.