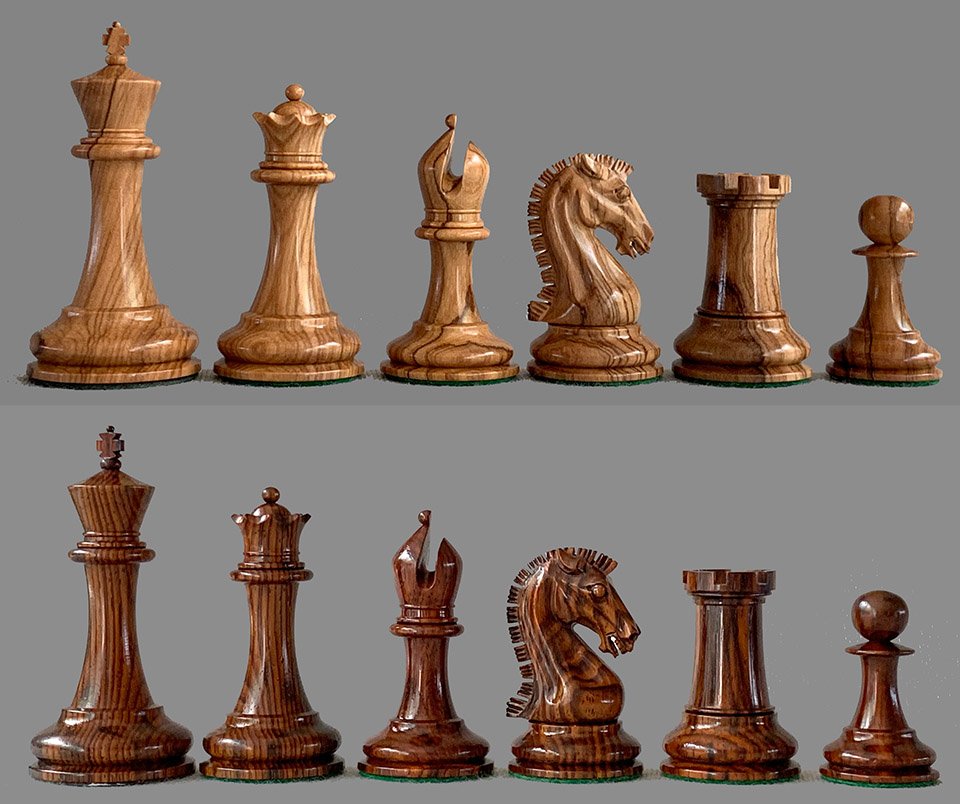 Offered here is a truly unique set of Camaratta Cooke Staunton Chessmen, fabricated from scarce Olivewood and brilliantly figured Cocobolo. The King stands 3-5/8″ tall with a 1-3/4″ diameter base. The chessmen are nicely weighted and cushioned atop English baize base pads. The Chess pieces are housed in a custom-made solid mahogany hinge-top box, with a semi-mortise lock set. Only four sets of the Camaratta Cooke Staunton Chessmen were produced in this configuration. Due the high cost and lack of availability in the proper sizes, no additional sets will be produced in these woods.

These chess pieces were designed in 2010 and copyrighted by Frank Camaratta. This design is a refinement on the original Staunton Chessmen registered by Nathaniel Cooke in March of 1849. Two notable features of this new design are the magnificent Knights with their unique upright manes and the open-miter Bishop’s headpiece, an abstract representation of the tongues of a flame, the ecclesiastical representation for Wisdom.

The Camaratta Cooke Staunton chessmen play and display best on a chessboard with 2-1/4″ squares. The chessboard shown is not included, but suitable chessboards can be found elsewhere on this site. For a large selection of premium chessboards, click here.

The House of Staunton was founded in 1993 and incorporated in 1999. When building the House of Staunton, our vision was to create a set of chessmen that captured the feel and exquisite old-World craftsmanship found in those early Jaques Staunton pattern chess sets.  In line with that pursuit, we concentrated on recreating the masterful workmanship of the Bishops and the Knights which were derived from the noble steeds whose visages are captured in the Parthenon frieze (expropriated in 1806 by Thomas Bruce, 7th Lord of Elgin and since referred to as the Elgin Marbles). We also wanted to retain the graceful proportional relationship among the pieces and Pawns. We hope we have been somewhat successful in that pursuit.