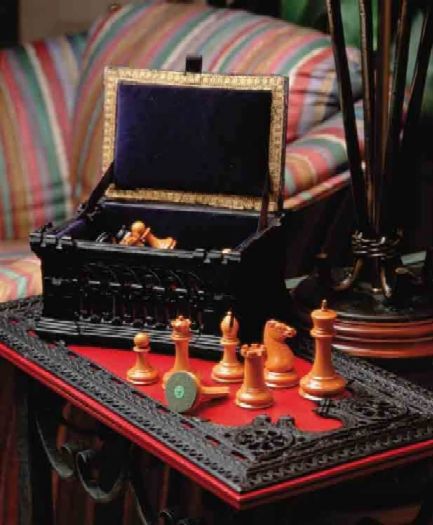 Leuchars was established at 47 Piccadilly, London in 1794 by James Leuchars. In 1820, the business moved to 38 Piccadilly shortly before James Leuchars died in 1822. Lucy Leuchars, James’ widow, continued the business under the name of L. Leuchars. In 1837, the same year as Queen Victoria came to the throne, the firm was awarded the Royal Warrant for their supply to the royal family.

Expanding to 39 Piccadilly in 1841, the name had now changed to Lucy Leuchars & Son; the ‘Son’ referring to William Leuchars. After Lucy’s death in 1847, William assumed sole control of the business. Leuchars exhibited  at the Great Exhibition of 1851, the International Exhibition of 1862  and the 1867 Paris Exposition. They sold high quality items including ivory Staunton chess sets by Jaques of London and Carton Pierre caskets and chess boards as well as Compendium of Games Cabinets and Dressing Cases.