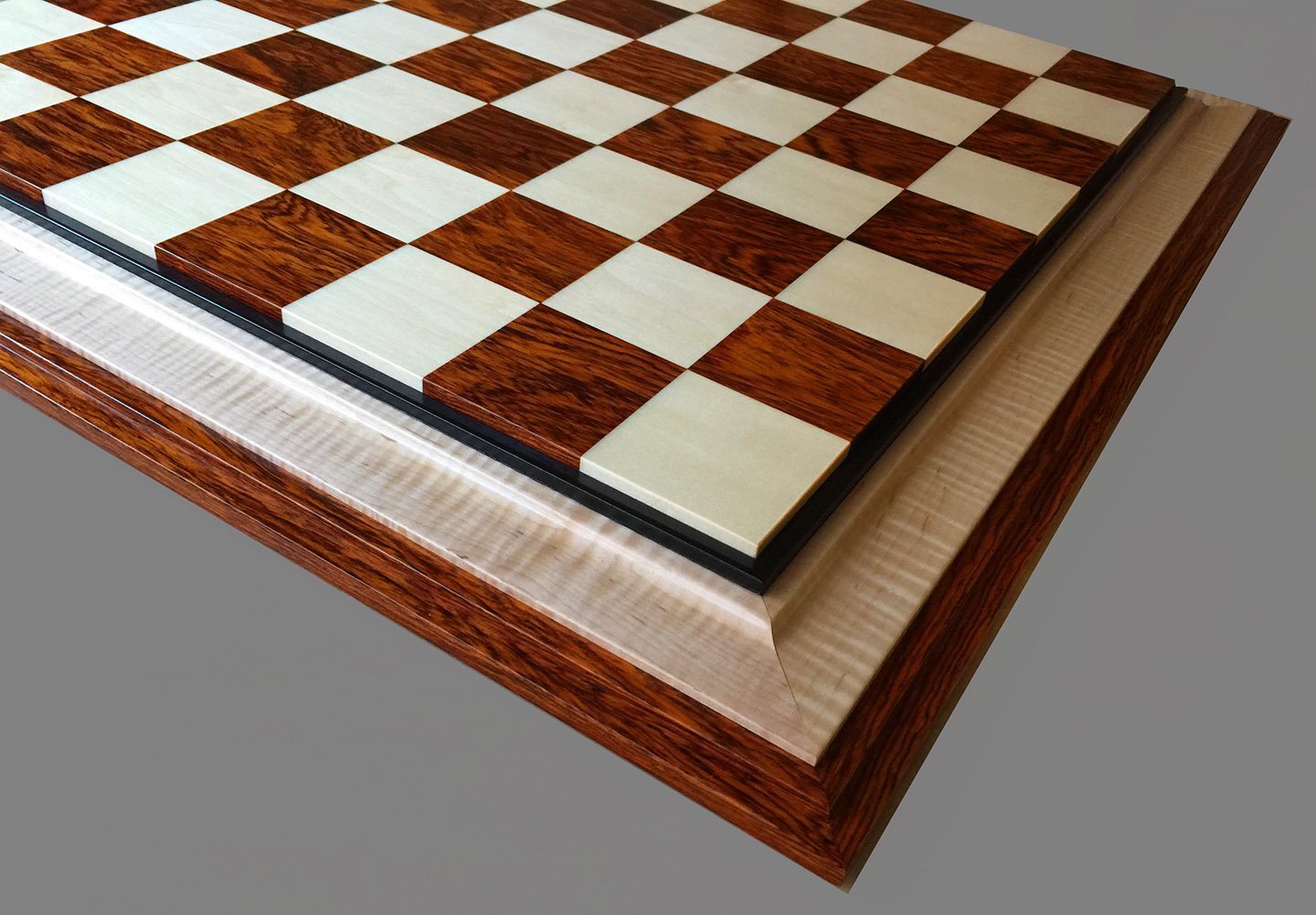 A Holly and Cocobolo Signature Chessboard with raised 2-1/2″ squares of Cocobolo and Holly and a solid frame of Tiger Curly Maple and Cocobolo with an Ebony Delimiter. The chessboard measures 25″ square. This Signature Contemporary Chessboard, with its unique raised playing field, was designed  by Frank Camaratta and crafted by Bill Lisica. The chessboard is new and is accompanied by a brown protective soft cotton slip-case.

Cocobolo is one of today’s most prized lumbers for its outstanding color and figure. A member of the Rosewood family, (Dalbergia retusa), Cocobolo is is stronger and denser than Brazilian Rosewood, Because it stands up well to repeated handling and exposure to water, a common use is in gun grips and knife handles. It is very hard, fine textured, and dense, but is easily machined. The abundance of natural oils, however, causes the wood to clog abrasives and fine-toothed saw blades, like other hard, dense tropical woods. Due to its density and hardness, even a large block of the cut wood will produce a clear musical tone if struck. It is used to make musical instruments, such as oboes and clarinets, for its “warm, rich palette”.Cocobolo can be polished to a lustrous, glassy finish. It has also been used to make necks of guitars and has been used as a substitute for Brazilian Rosewood since that wood was was CITES listed in 1992.

Holly (Ilex opaca) is typically used only for ornamental and decorative purposes. Unlike other light-colored woods, Holly remains light-colored even after a finish has been applied, Seldom available for commercial sale, Holly is an expensive domestic lumber, and is usually only available in small quantities and sizes. Holly is an ideal lumber for chessboards. It has a very uniform, pale white color with virtually no visible grain pattern. Holly is usually cut during the winter and kiln dried shortly thereafter to preserve the white color of the wood.

Tiger Curly Maple is not technically a distinct species of Maple, but rather, it’s a figure that’s occasionally found in Acer saccharum (Sugar Maple) trees. Tiger Curly Maple, also known as Flamed Maple, Ripple Maple, Fiddleback stripe, is a feature of Maple in which the growth of the wood fibers is distorted in an undulating chatoyant pattern, producing wavy lines known as “flames”. The figure is reportedly caused by unfavorable growing conditions for the tree. The Maple attempts to start numerous new buds to get more sunlight, but with poor growing conditions the new shoots are aborted, and afterward a number of tiny knots remain.