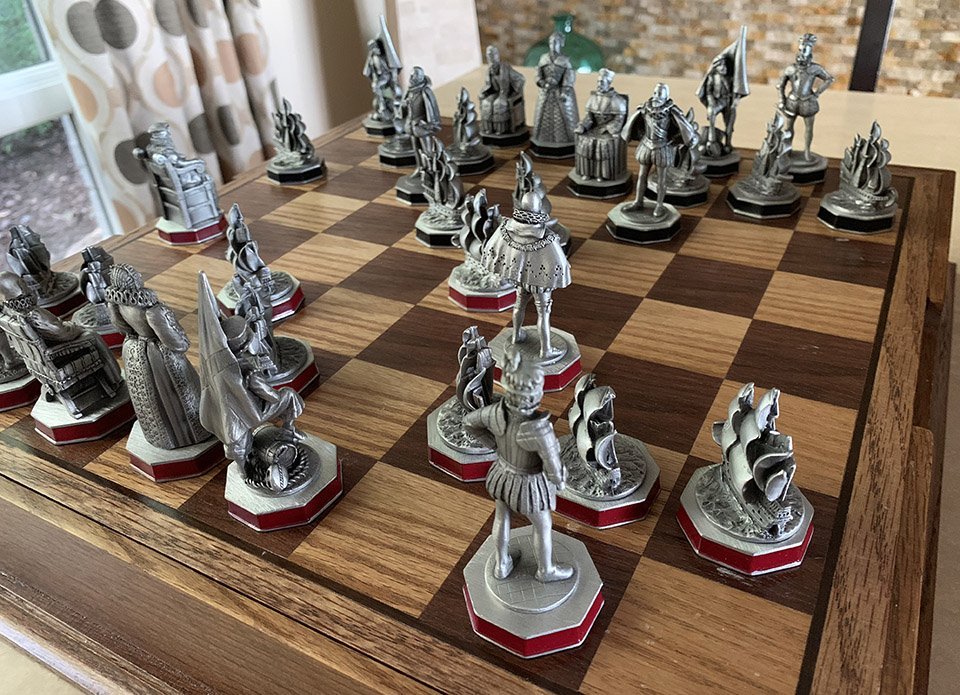 The Danbury Mint Armada Chess Set offered here is a numbered, Limited Edition. The Armada chess set was issued by Danbury Mint, by subscription only in 1988 to commemorate the 400th anniversary of the defeat of the Spanish Armada. The chess set contains 32 Pewter portrait sculptures mounted atop octagonal Red and Blue enameled embellishments resting cushioned with gold-embossed blue and red leather base pads, gold-embossed with the names of the respective pieces and pawns.  The opposing armies represent the 16th century Spanish court versus the Elizabethan court. The pawns are each modeled as different fighting galleons. The king stands 3,in. and the pawns are approximately 2 in.

The Danbury Mint Armada Chess Pieces are housed in a fitted presentation oak chessboard/box with the original certificate of authenticity, Serial Number 2418, and an accompanying historical booklet. The chessboard forms the lid of the presentation box and is reversible. The top of chess box lifts off to reveal separate storage compartments for each of the thirty-two chess pieces. The presentation chessboard/box measures 15-3/4″ x 15-3/4″ x 3″ tall and is solid oak. Also included with the Danbury Mint Armada Chess Set is the Armada Chess Set booklet, which details the history of the battle, a short history of each of the characters and galleons, and the role they played. The Danbury Mint Armada chess set is no longer manufactured. The chess set is complete and in like new condition.

A brief History of this Historic Sea Battle.

The Spanish Armada was a Spanish fleet of 130 ships that sailed from A Coruña in late May 1588, under the command of the Duke of Medina Sidonia, with the purpose of escorting an army from Flanders to invade England. The strategic aim was to overthrow Queen Elizabeth I and her establishment of Protestantism in England, with the expectation that this would put a stop to English interference in the Spanish Netherlands and to the harm caused to Spanish interests by English and Dutch privateering.

The Armada chose not to attack the English fleet at Plymouth, then failed to establish a temporary anchorage in the Solent, after one Spanish ship had been captured by Sir Francis Drake in the English Channel. The Armada finally dropped anchor off Calais. While awaiting communications from the Duke of Parma’s army, the Armada was scattered by an English fire-ship attack. In the ensuing Battle of Gravelines the Spanish fleet was damaged and forced to abandon its rendezvous with Parma’s army, who were blockaded in harbor by Dutch fly-boats. The Armada managed to regroup and, driven by southwest winds, withdrew north, with the English fleet harrying it up the east coast of England. The commander ordered a return to Spain, but the Armada was disrupted during severe storms in the North Atlantic and a large number of the vessels were wrecked on the coasts of Scotland and Ireland. Of the initial 130 ships over a third failed to return. As Martin and Parker explain, “Philip II attempted to invade England, but his plans miscarried, partly because of his own mismanagement, unfortunate weather, and partly because the opportunistic defensive naval efforts of the English and their Dutch allies (the use of ships set afire and sailed into the anchored Armada to create panic) prevailed.”

The expedition was the largest engagement of the undeclared Anglo-Spanish War (1585–1604). The following year, England organised a similar large-scale campaign against Spain, the English Armada or “counter-Armada of 1589”, which was also unsuccessful. A more detailed of the famous sea battle can be found here.

The Danbury Mint was founded in Westport, Connecticut, by Ralph Glendinning and Ted Stanley in 1969, as a subsidiary of Glendinning Companies. Their first product was a series of medals commemorating the Apollo 11 moon landing. The Danbury Mint has since created many commemorative items—figurines, collector plates, dolls, die-cast cars, etc.—based on historical events and people.