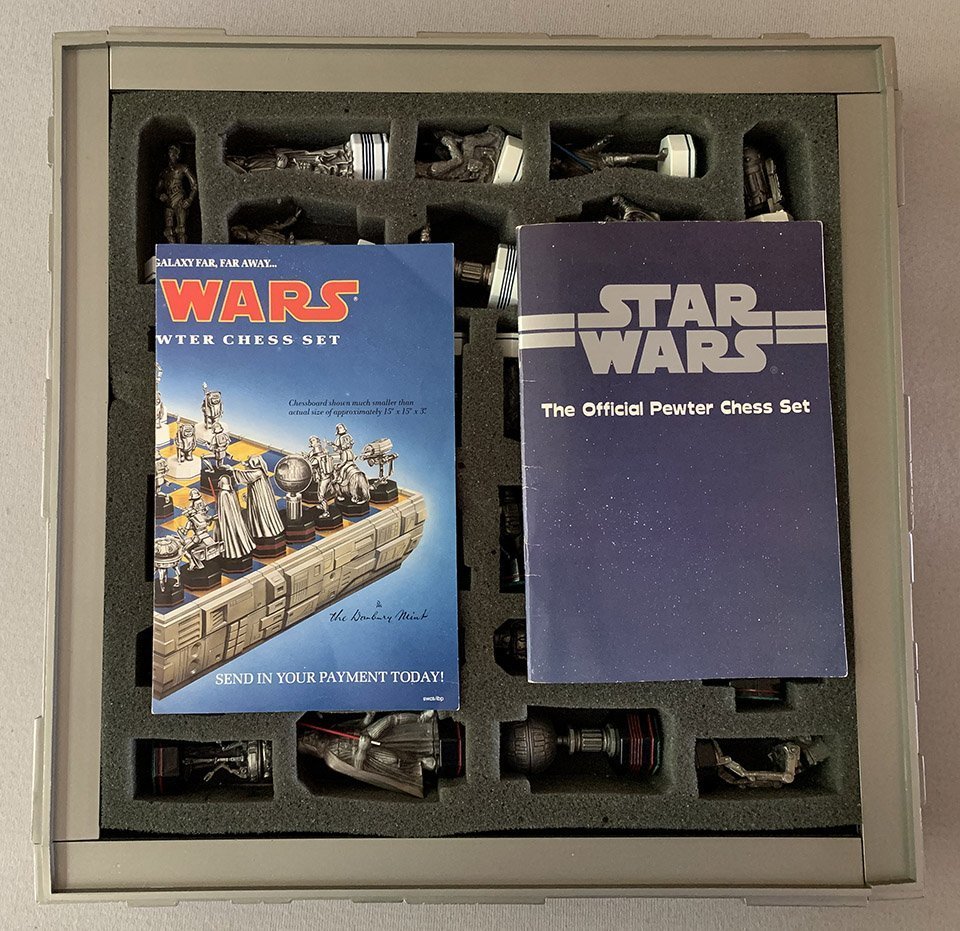 You are viewing the rare Limited Edition Danbury Mint Star Wars Chess Set. The chess set contains 32 Pewter sculptures mounted atop octagonal pewter bases. The set and features characters from The Empire Strikes Back and The Return of the Jedi. The Chess Pieces are housed in a durable, heavy-duty plastic presentation box with a fitted foam insert. The chessboard forms the lid which lifts off to reveal each of the thirty-two chess pieces. The box measures 16″ square by 3-1/2″ deep. Also included with the Danbury Mint Star Wars Chess Set is the Star Wars Chess booklet and the Certificate of Ownership and Serial Number A1319. This set was offered to the public in 1993 and was available via mail-order subscription only. Pieces were shipped at a rate of 2 chess pieces every other month, taking almost three years to complete the set. Each piece cost about $22.50, resulting in an original cost of over $700. The Danbury Mint Star Wars chess set is no longer manufactured. The chess set is complete and in like new condition.

The Danbury Mint Star Wars Chess Set contains major characters from the Star Wars Episodes The Empire Strikes Back, and Return of the Jedi. The pieces are beautifully detailed and made of a heavy weight pewter set upon an octagonal base. A custom crafted chessboard, “inspired by the futuristic look of a Rebel Alliance spaceship”, is included as well. The resulting detail is impressive, from the light sabor in Luke Skywalker’s hand, to Darth Vador’s flowing cape and the tiny Ewoks’ perky ears. Both sides of The Force, dark and light, evil and good, are brought to life in the Danbury Mint Star Wars Chess Set.

Jedi knight Obi-Wan Kenobi and the mysterious, pointy-eared Jedi Master Yoda (King) stand side by side, with their young pupil, Luke Skywalker (Bishop). Seated atop an anti-gravity speeder bike is Princess Leia (Knight). There’s also the Millennium Falcon (Queen), the Corellian light freighter owned by smuggler Han Solo (Bishop) and co-piloted by the fur-covered wookiee, Chewbacca (Knight). Other pieces include the droids C-3PO and R2-D2 (Rooks), plus a host of Ewoks (Pawns).

The dark side of The Force is led by the Emperor Palpatine (King) and his henchman, Darth Vador (Bishop). At the emperor’s command is the planet-blasting Death Star (Queen), along with vast armies of Imperial storm troopers (Pawns) and an airborne Imperial Scout (Knight). Other allies of the evil Emperor include the notorious bounty hunter Boba Fett (Bishop) and the nomadic Tusken Raider (Knight) riding on a bantha, an elephantine breed of beast. These elite soldiers are joined by the the Probe Robot (Rook) and the nearly invincible AT-ST Walker (Rook).

The Danbury Mint was founded in Westport, Connecticut, by Ralph Glendinning and Ted Stanley in 1969, as a subsidiary of Glendinning Companies. Their first product was a series of medals commemorating the Apollo 11 moon landing. The Danbury Mint has since created many commemorative items—figurines, collector plates, dolls, die-cast cars, etc.—based on historical events and people.