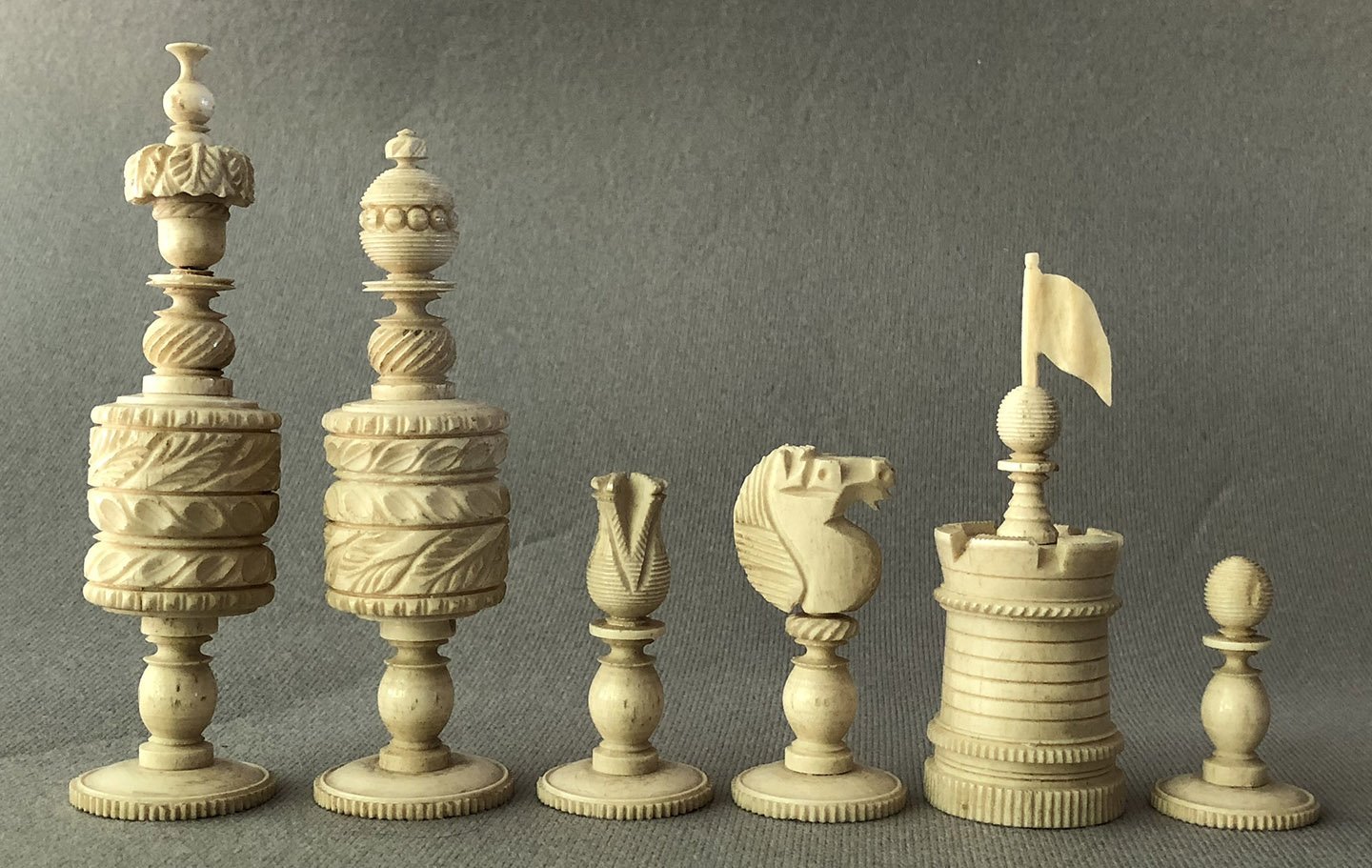 This offering is an outstanding example of a set of very early Type II Decorative Barleycorn Chess Pieces with broad, heavily adorned, bodies on the Royal Pieces with fine acanthus leaf carving and an unusual “Fountain-top” King’s finial. The chessmen are all mounted atop smooth baluster stems with “cogged” circular bases.The chessmen are fabricated from natural and red-stained bone. The King stands an impressive 5.4″ tall with a 1.4″ diameter base. The Rooks are massive, reticulated towers, extremely intricately carved, with a heavily detailed body,  surmounted with a staff and flag.  The Bishops, Knights and Pawns are baluster mounted headpieces with cogged bases. The  chessmen are in excellent condition. True Barleycorn style chessmen have broad barrel-bodied Kings and Queens, and are normally fabricated from bone, rarely ivory. Very few Barleycorn chess sets would surpass this set in terms of sheer size and detailed workmanship.  The set was probably produced between 1820 and 1840. The antique chessboard shown is not part of this sale. A suitable chessboard can be found elsewhere on this site. may be purchased elsewhere on this site.

The term Type II English Barleycorn chess set is used to describe a range of Barleycorn designs which feature highly decorated, fluted bodies and fountain finials often with carved acanthus leaves atop the Kings. The better sets will often have copious leaf and rope carvings on the bodies of the Royal pieces and cogged or lobed cases. These chessmen were primarily fabricated from bone and were made  in England during the 19th century. The Queens will have reeded spherical crowns, usually with small, simple finials. The Royal pieces will be pedestal mounted, often with reeded details and cogged collars. Rooks are normally stout towers, often sporting tapered staffs or secondary towers and flags. Bishops, Knights and Pawns are baluster mounted, often reeded.  The English Barleycorn Type II chess sets first appeared at the beginning of the 19th century, which coincided with the advent of the ornamental lathe. These sets were produced by several manufacturers throughout the 18th and 19th centuries. Although the precise manufacturer of this particular set is not known for certain, a page from the remnants of the 1860 Jaques Pattern Book on the left shows several similar Barleycorn sets produced by the firm and might provide a hint as to the maker of this particular set of English Barleycorn chessmen.

This poplar design suffered from instability and fragile details which were easily broken. Other common complaints were that the “busy” design could disturb a player’s concentration and the size of the Royal pieces often obscured the view of the other chessmen during play. (Needless to say, these sets were not conducive to Blitz Chess!) Barleycorn chess sets were in common use through the early 20th Century. Despite its early popularity, the design was quickly replaced by the now standard Staunton chessmen, first offered in September of 1849. The new Staunton  chessmen proved to be much more stable, durable and suitable for practical play.