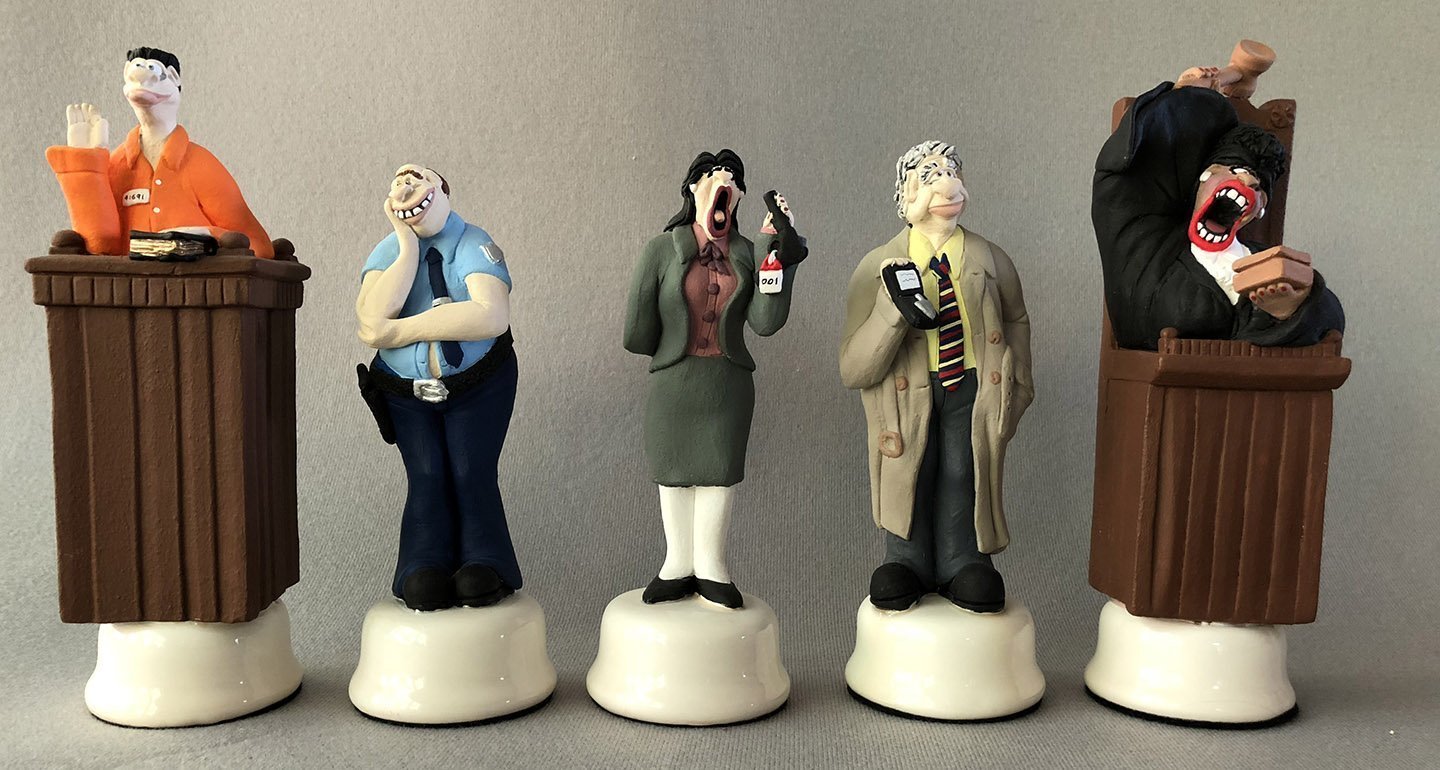 A very rare, Limited Edition, Doug Anderson Law and Order Chess Set, signed “Anderson”. The production number, 99/1000, is hand-printed on the bottom of the wall of one of the Black Rooks. . The Law and Order King (angry Female Judge) is 8-1/2″ tall, the Queen (Male Prosecutor) is 7″ tall. The other pieces range  between 7″ and 7-1/2″ tall. The criminal side King (in the Clown Mask) stands 7.5″ tall. The other chessmen range in size from 8-1/2″ to 5-1/2″.  The chessmen are in like new condition. Each pierce is made from Silicone molds encased in fiberglass shells. Each of the chessmen is hand-painted in exquisite detail. Utilizing silicone molds encased in fiberglass shells, the characters were all hand cast using a process often referred to as “cold casting” as no heat is required. A very tough and durable material called called Forton was used. The casting process was quite laborious; cleaning up seam lines, finishing and then finally hand painting.

The initial plan was to produce 1000 sets, but the run was halted after only 215 sets were produced. This Law & Order Themed chess set is the only Chess set that Doug Created using molds. The gallery that sold his sets in Boca Raton was Raleigh Gallery – no longer in business. They urged Doug to collaborate with them to create the Doug Anderson Law and Order Chess set. That’s the reason each of the chessmen has a black leather base pad gold-embossed “Anderson Fife Studio“. Fife bailed out of the collaboration immediately, even before the initial debut of this set. So a base pad with Fife on it would denote that this was an earlier casting. Once Fife stopped partnering in this venture, Doug switched the label to Anderson Studio.”

Doug Anderson (born Salt Lake City 1957) began his ceramic career at a young age, having his first Art Show at age 17. After graduating San Jose State University with a degree in Ceramics and Glass, he opened a studio in San Francisco, where he developed two distinct styles. His sculptural freeform works were called “A Beginning”, and he made his biggest mark with his character works. These whimsical works decorated cookie jars, tea pots, and his extremely successful chess sets. These sets were sold through galleries to such celebrated names as Robin Williams, Merv Griffin, Steve Wynn, Sharon Stone, Joe Montana, Barry Bonds, and David Lee Roth. He has exhibited and numerous international ceramics shows, and has been featured in countless publications. His chess sets have sold at Fischer Gambino in New Orleans for upward of $12,000. Doug’s sculptures are best known for their humorous characters featuring toothy keyboard grins. Sculpting and art enthusiasts have praised Doug’s work as “Andersonian” in nature.  He has been featured on numerous television programs, magazines, newspapers as well as featured artist in museums, galleries and ACC (American Craft Council) exhibitions. A curriculum Vitae for Doug Anderson can be found at  http://www.dadesignsf.com/wp-content/uploads/2016/11/da-cv-final.pdf