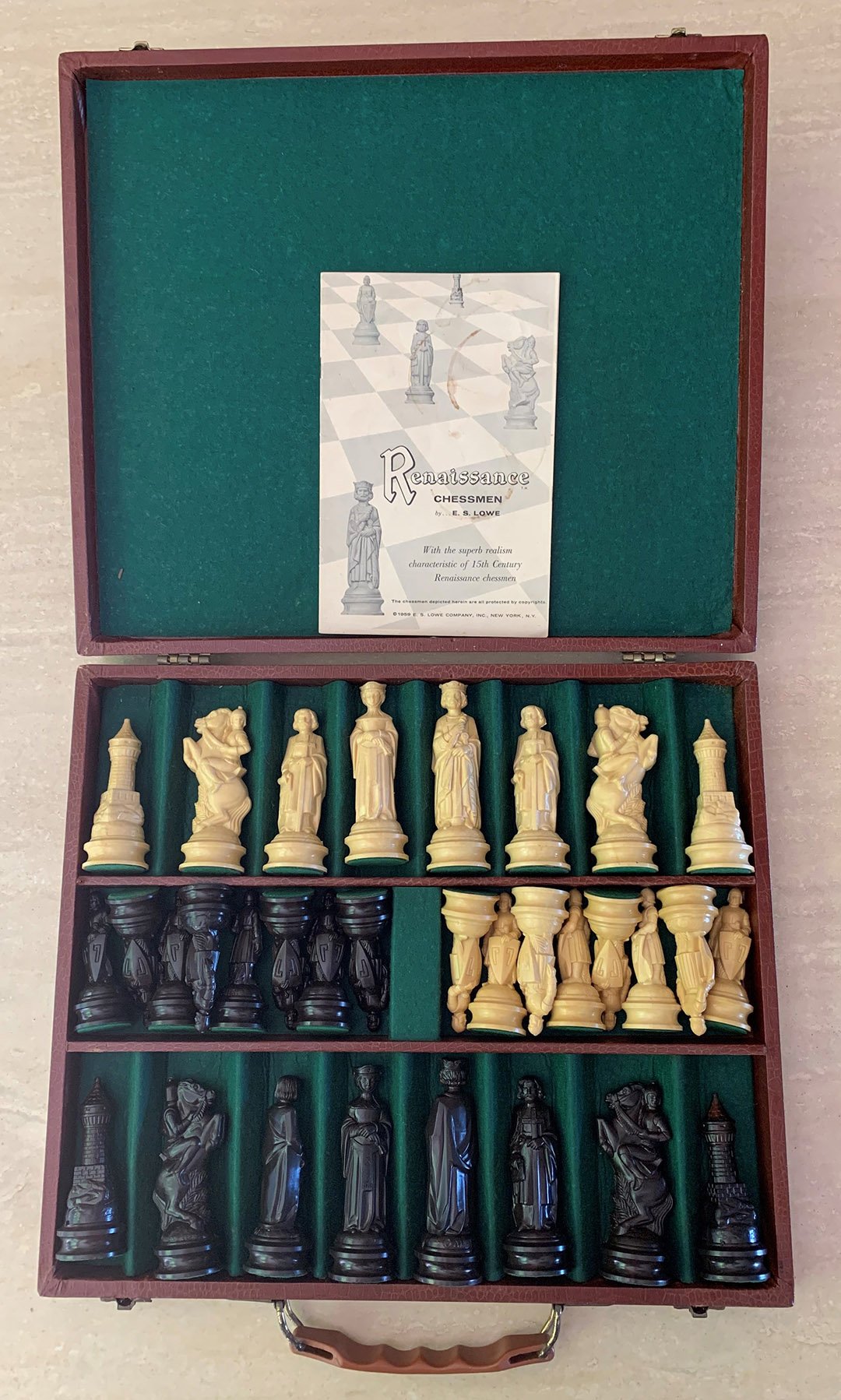 Offered here is the E. S. Lowe Renaissance Chessmen housed in its brown leatherette briefcase. The chessmen are licensed copies of the magnificent hand-carved King Richard chessmen by Anri of Italy. The King stands a majestic 4-3/4″ tall. The light army is a rich cream color and the dark army is a deep chocolate brown.The chessmen rest atop bases, 1-1/2″ in diameter, which are weighted and felted. Each of the chessmen carries the Anri name molded into their bases. The  chessmen are housed in a brown leatherette briefcase and includes the E.S. Lowe pamphlet with rules, products and price list, but does not include a folding chessboard. The Anri-E.S. Lowe Renaissance chessmen were produced from 1959 until the 1970s. The chessmen are in excellent condition.  The corners of the briefcase are slightly worn with losses as shown in the attached images. The chess pieces were created in the 15th Century Renaissance style.


Edwin S. Lowe (E. S. Lowe) (1911 – February 23, 1986) was a U.S. toy maker and entrepreneur whose promotion of a game he renamed “Bingo” made it popular as a national pastime. E. S. Lowe Company produced bingo games and materials in addition to plastic toys and the still-popular dice game Yahtzee. Lowe was born in Poland, relocating to the United States at the age of eighteen. While working as a traveling toy salesman in December 1929, Lowe encountered a group at a Georgia carnival engaged in a game called Beano. Returning to his Brooklyn, NY, home, he organized a game with several friends, one of whom became so excited at winning, she shouted “Bingo!” The local popularity of the game prompted Lowe to print game cards, which he later sold under the name Bingo. He established the E. S. Lowe Company for the production of his Bingo game cards, which initially were released as 24-card sets.

E. S. Lowe produced miniature chess and checker game sets that circulated widely among U.S. service personnel in World War II. The company continued to produce games and plastic toys after the war. In 1956, he bought rights from a Canadian couple who approached him with a concept of a game that they played on their yacht. Lowe highlighted its origins in naming the game Yahtzee. In 1959, Lowe produced the Renaissance Chess Set which featured highly detailed chess pieces based on the Renaissance period. The impressive design of these chessmen is still highly regarded today and the chess set is a popular collectors item. Milton Bradley purchased E. S. Lowe Company in 1973 for $26 million.

An excellent article on the history of the E. S. Lowe company can be found here.