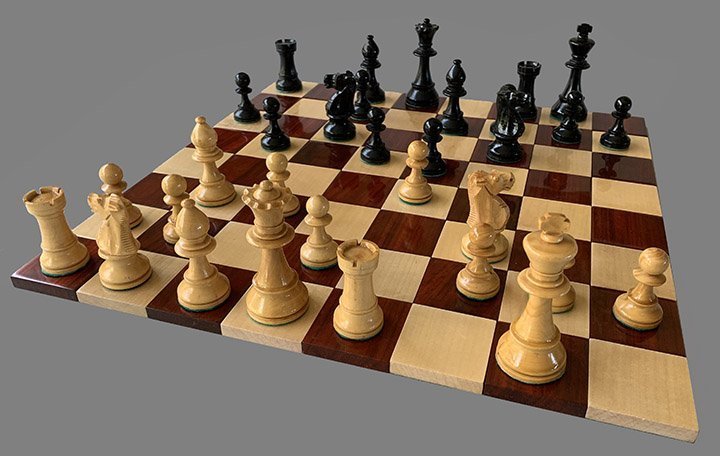 Offered here is a set of French Lardy Tournament Chessmen, Natural and Black Lacquered, weighted and felted. The King stands 3-1/2″ tall with a 1-1/2″ diameter base. The chessmen are in like-new. These sets seem to have been produced after WWII, probably around 1965 – 1970. The French Lardy Tournament Chessmen are housed in a lined and divided Mahogany box. The box is designed to allow the chess pieces to be stored in an upright position, with the Kings and Queens lying flat. These Staunton chess pieces play and display best on a chessboard with 2-0″ squares. The chessboard shown is not included in the sale. For a complete selection of our finest new and antique chessboards, please click here.  An extensive inventory of antique and contemporary chess timers can be found here.

Lardy was a French chess set manufacturer, founded in 1890 in Dortan near Oyonnax in the French Jura, which closed shop in 1992. In the Post World War II era, Lardy exported very large numbers of chess sets to the major market USA and England. within a decade or so, cheap knock-offs of the Lardy chessmen were flooding the English and American markets. Although not of the same quality as the originals, buyers flocked to purchase these cheaply made, although economically-priced chess sets in large quantities. The glut of these inexpensive knock-offs using cheap Indian labor eventually forced Lardy to close their doors in 1992.

Lardy was not the only French manufacturer to offer decent quality chess sets at a reasonable price.  Makers like Chavet and Drueke also tried to infiltrate this lucrative market for mid-range chessmen. For more information of the Lardy Chessmen, visit here for an interesting historical overview.