Offered here is an exquisite inlaid leather Contemporary Class Geoffrey Parker Backgammon Set. Combining the modern with the traditional  Contemporary design backgammon sets showcase the twinning of leather & metal to a magnificent extent. These modern boards are individually bound around a wooden core in our finest dauphin calf leather which is specially tanned for gaming. The board is super-fast and wine & tobacco resistant. The black leather briefcase measures 33-1/2” (Open) by 25-1/2” wide. It has a full leather hand-stitched handle and a pair of combination locks.

The inlaid leather points measure 10” x 2” at the base. The Chrome edged Black/Orange Leather checkers measure 2” in diameter and are 3/8” thick. The Geoffrey Parker Backgammon set includes a chrome-edged orange and black leather matching, hand-embossed doubling cube, along with four 6mm ball-cornered dice and two black leather-wrapped uncrushable dice cups, suede lined with trips to prevent foul play. The set hand-made in England. It is new and never played.

The stunning Contemporary Design stones are hand-inlaid with matching Dauphin calf leather. Extremely fast and for those who like a “noisy” game – a delightful “clicking” sound is made during play as the stones knock against each other. A matching 2″ inlaid leather, nickel banded Doubling Cube top this fabulous design. The Currently the Contemporary Class Geoffrey Parker Backgammon set is only available in Competition and Tournament sizes.

The Geoffrey Parker story starts in 1958 when he started to produce a range of leather-bound books, from classics to stationary – most of them pocket size. From “Beefeaters” to Ocean liner’s “flags”, the books were lovingly hand painted and sold to tourist gift shops, museums, great cruise companies such as P & O and Cunard, to exclusive boutiques and designer labels. 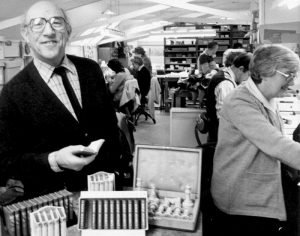 One such contact was Alfred Dunhill, who’s grandson, Richard Dunhill, approached Geoffrey and asked him to make an inlaid leather chessboard. Geoffrey soon discovered that the ancient skill of inlaying leather was a particular craft which came easily to him and his growing team of craftsmen. As often happens to a small specialty company, a request by a well-recognized company starts the company of the road to success. That fortuitous association with Dunhill started led the Geoffrey Parker Company on the journey that led to their preeminent position as the world’s leading maker of high-end leather games and leisure goods. After that inaugural chessboard success, the company sought out to team with the best in the business. Their first successful encounter was with the firm of John Jaques of London, who have been inseparable from the famous Staunton Chessmen since being chosen to manufacture that now famous design which went on to become de-rigueur for all World Championship play from 1849 onwards and still holds that vaulted position today.