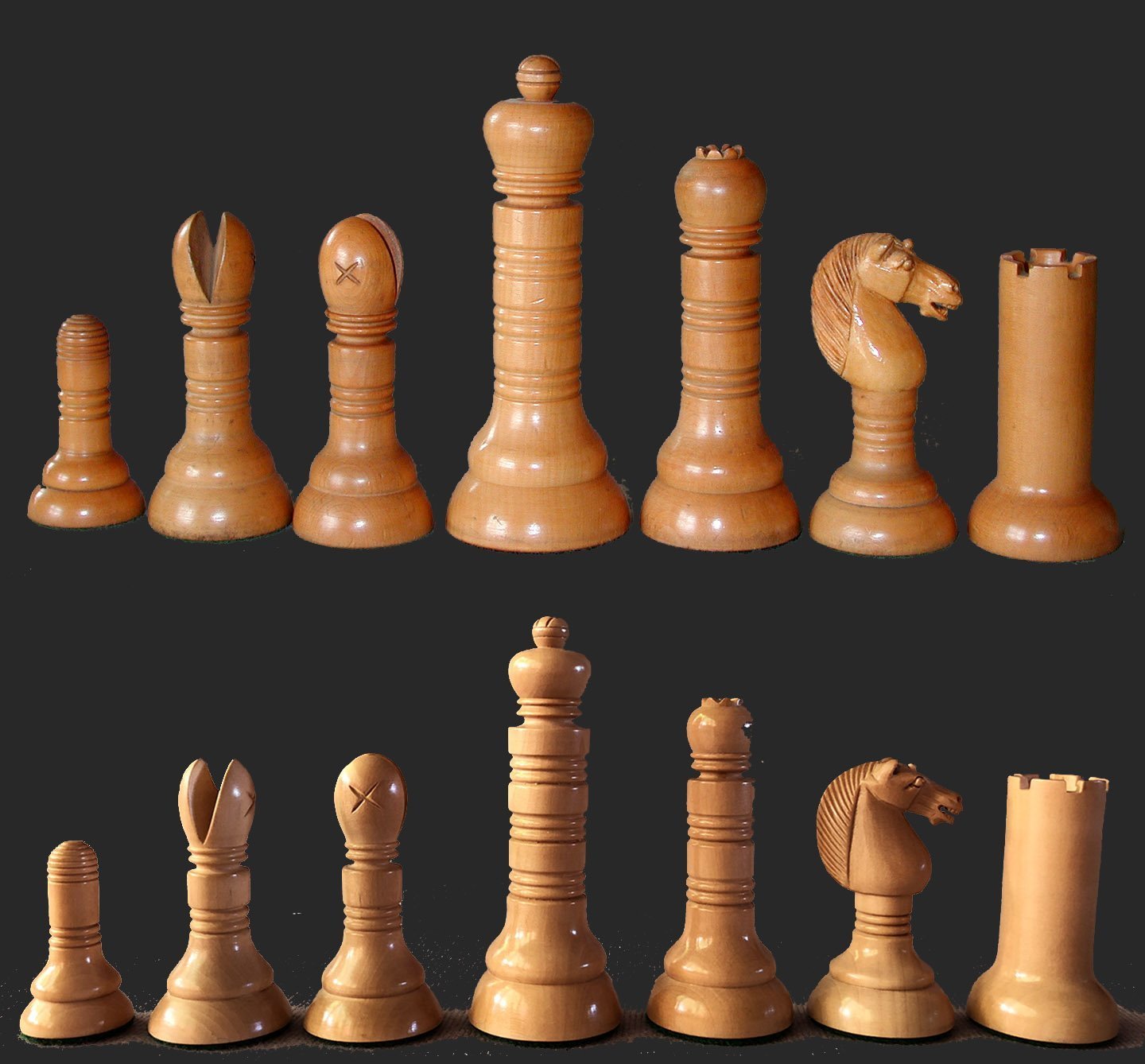 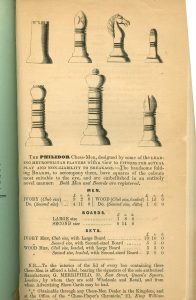 Offered here is a reproduction of the George Merrifield Philidor Chessmen which were produced and registered in 1850 in Boxwood and Ebony. Each of the Chessmen is weighted and is cushioned atop a pad of green English baize. The King height is 3-7/8″ with a base diameter of 1-3/8″.  Merrifield tried to improve on Staunton’s King Side stamping by adding a small “pimple” atop the king side Rooks and Knights. This unusual feature has been retained in this reproduction. The design was registered in 1850. An accompanying image shows the registration lozenges which were applied to the bases of each of the chess pieces. An original signed George Merrifield label is also shown. The reproduction George Merrifield Philidor Chessmen are in new condition and are housed in a replacement box. The chessmen play and display est on a chessboard with between 2″ and 2-1/4″ squares. The antique Chess board shown in the image is not included in this sale, but a suitable chessboard can be found elsewhere on this site, To see our extensive collection of new and antique chessboards, please click here.

The patented Philidor chessmen were introduced in 1850 by George Merrifield to compete with the revolutionary Staunton chessmen which first appeared on the market in September of 1849. They were crafted from Boxwood and Ebony as well as Ivory. The chessmen could be ordered in two sizes, the Small Club-Size like this one and the full Club-Size. These rather artistically challenged Chessmen were unmercifully criticized by Howard Staunton in his columns in the 1850 Illustrated News. Staunton even went so far as to state that these chess pieces would never be used by any  respectable chess player. Unfortunately for Merrifield, Staunton’s critique proved immensely successful. The new design was a total failure and was manufactured for less than a year. They are quite rare and currently, only four original Philidor sets are now known to exist.  An advertisement from Staunton’s 1850 “Chess-Player’s Chronicles” is shown on the left. The advertisement was rather ironic, given that Staunton was merciless in his criticism of the Philidor chessmen.

George Merrifield a cabinetmaker of Lincoln’s Inn Fields specialized in games tables, but also turned some beautiful chess pieces. An effort was made to market a simpler designed “Philidor Chess Set,” perhaps to compete with Jaques’ Staunton. The designs were registered in 1850 in the UK and manufactured by George Merrifield. The advertisement for them ran for around six months in a London publication. But Staunton ridiculed the design, and that did not help the popularity of the chessmen. They never took hold and had a production run of only about a year.

Merrifield’s workshops were located at 33 East Street, Queen’s Square, London. The Philidor Chessmen produced somewhere in 1850, before he joined the Jaques company. Merrifield’s chessmen have a unique style and are easily  identifiable. It is possible that Merrifield’s pinning the fate of his company on his patented new design, the ill-fated “Philidor” chessmen in 1850 to compete with the new Staunton chessmen led to its subsequent demise and forced him to seek employment with his competitor, John Jaques.