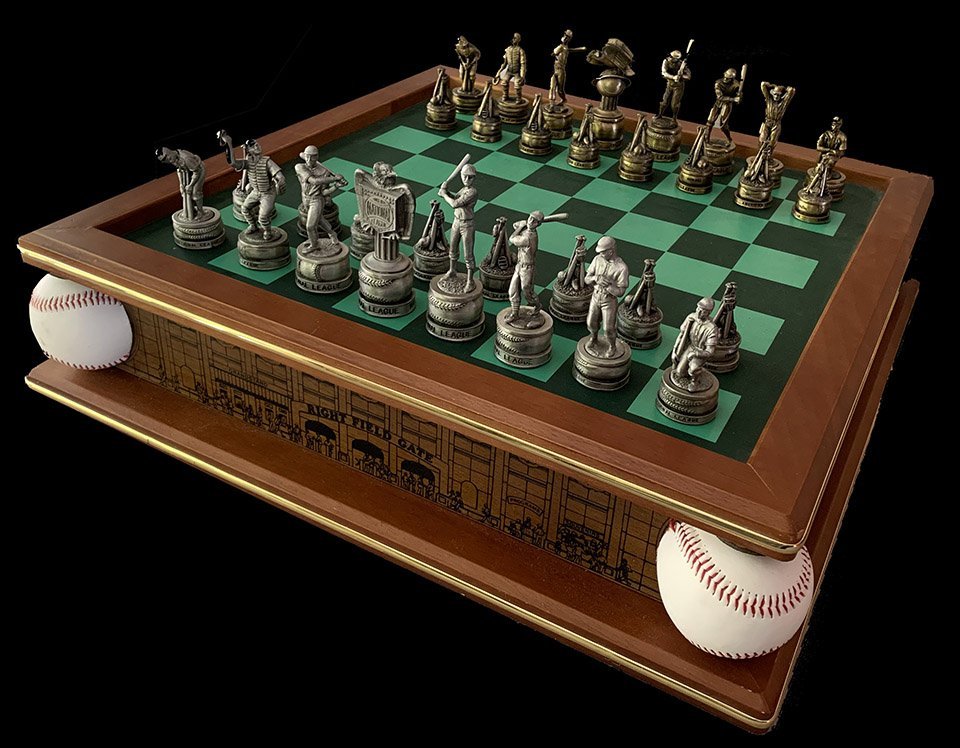 The Limited Edition Golden Age of Baseball Chess Set was first produced in 1994 by The Danbury Mint and distributed by Longton Crown Collections. The Golden Age of Baseball chess pieces are hand-crafted of solid pewter in gold and silver. This chess set pits legends from the American and National Leagues from the early-to-mid 1900s and Commemorates Baseball’s Golden Age. The chess pieces measure 2 inches to 4 inches in height.

The players represented are:

The Pawns are each engraved with a National League or an American League team stylized name.

Each of the Golden Age of Baseball Chess pieces displays the name of the player or team and chess piece rank on the gold and silver metal disc affixed to the bottom of each figure. The pieces also have engraving on their bases. The removable top is a fabric-covered chessboard. The entire unit measures 20″ x 20″ x 5″. The bottom of the display box interior features a baseball diamond. Actual stitched baseball covers form the four corners. The sides have graphics displaying the gate information. The display case is designed with shelving which allows the entire unit with the chess pieces to be hung as a wall display in the shape of a baseball diamond.

The ensemble includes a tri-fold booklet containing biographies of all the players, the Rules of Chess and the Certificate of Authenticity Numbered #0338. This chess set was originally a subscription item, with one piece sent every month for $23 each.

Condition: The chessboard is very good with some slight scratching. The pieces are in excellent condition. Here is a chance to own a unique piece of baseball memorabilia!

The Danbury Mint was founded in Westport, Connecticut, by Ralph Glendinning and Ted Stanley in 1969, as a subsidiary of Glendinning Companies. Their first product was a series of medals commemorating the Apollo 11 moon landing. The Danbury Mint has since created many commemorative items—figurines, collector plates, dolls, die-cast cars, etc. which are based on historical events and people.