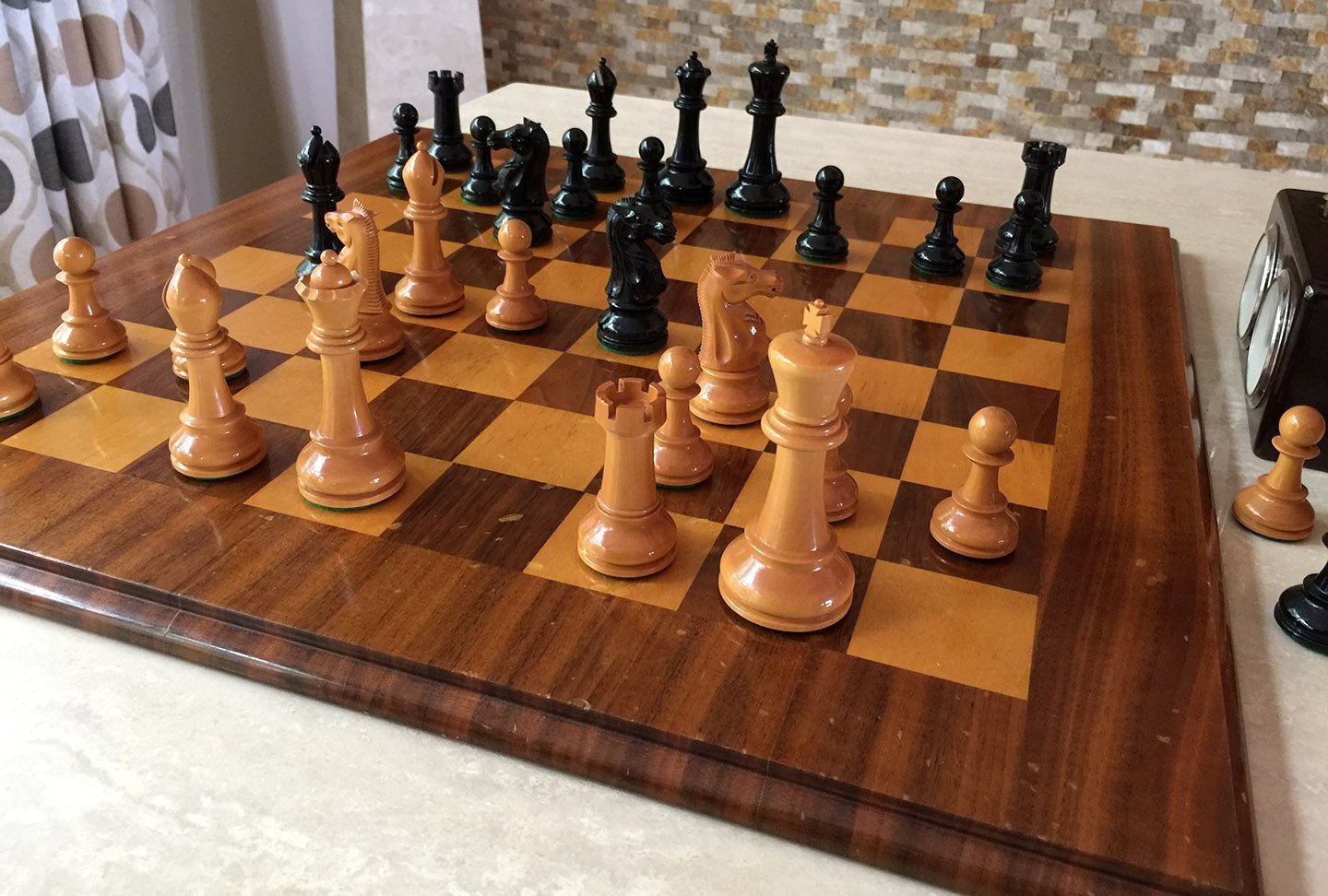 The Golden Castle Craftsman Master Chessmen were produced by Golden Castle Limited in Tokyo, Japan at the end of World War II. The Black and natural lacquered Tsuge wood chess pieces have a 4-0″ King with a 1-3/4″ base. The chessmen are weighted and cushioned atop green felt base pads. The design was based on the famous Jaques Marshall chessmen produced in the early 1900s. The Golden Castle Craftsman Master Chessmen are housed in a dark-stained storage box, green felt-lined and divided, with a clasp and rotary pin to hold the lid closed. The underside of the box bears a white, signed label marked: “The Craftsman, Master, Staunton Pattern Chessmen, Golden Castle Co, Made in Japan“. The wooden storage case and chess pieces are in like new condition. The chessmen play and display best on a chessboard with 2-1/4″ squares. The original Camaratta hand-made chessboard and German BHB clock shown in the images are not included, but may be purchased elsewhere on this site.

Superbly crafted Stanton chessmen were produced by Golden Castle Ltd. from the end of WWII until around 1972. They were extensively advertised in Isaac Kashdan’s and Al Horowitz’ Chess Review as well as in Chess Life. All chessmen were crafted from Japanese Tsuge wood in Natural and either red or Black lacquered finishes, depending on the set design. The production ended when sets started appearing on the market with one or more of the chessmen warped due to the use of wood that was not properly seasoned. Once the U.S. Chess Federation cancelled their remaining orders with the company, they soon closed their doors. An ad for the two largest sets is shown above. It is interesting to note that the smaller chessmen were actually more expensive than the larger ones.  Over the 25 years or so of production, Golden Castle produced Staunton Chessmen in five distinct sizes.

Japanese Tsuge wood, Properly known as Satsuma-Tsuge, is the highest quality boxwood found in the Ibusuki area of Kagoshima Prefecture in Japan . This Boxwood is easily shaped, hard, polished, and often used to craft combs and other gaming products such as Shoji chessmen. The wood allows paint to display well, is not easily breakable, and develops into a distinct color with age.