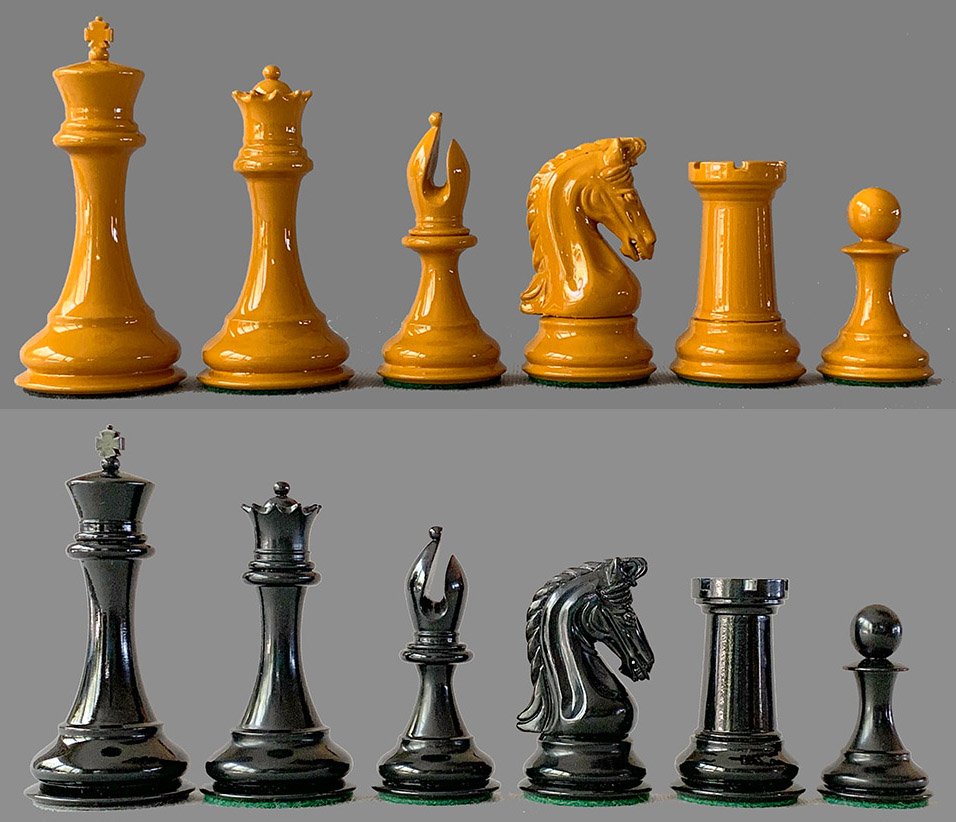 Offered here is a set of Goldenrod Imperial Collector Chessmen, Black and Goldenrod Lacquered, housed in a fitted Red Mahogany hinge-top coffer with removable upper tray. The chessmen are heavily weighted and cushioned top real English baize base pads. The Kings sport gold-embossed Black English leather discs. The King stands 4-3/8″ tall with a 2-0″ diameter base. This set of chessmen includes an extra pair of Queens to assist during Pawn Promotion, a feature pioneered by us in 1995. This set was custom-made at the direction of the designer and is the only set of Imperial Collector Series Chessmen ever made in the Black and Goldenrod Lacquered finish. The chess pieces were designed in 1996 and are copyrighted.  The chessmen play and display best on a chessboard with 2-1/2″ squares. The chessboard shown is not included, but suitable chessboards can be found elsewhere on this site. For a large selection of game timers and premium chessboards, click here.

The Imperial Collector design is based on the original Staunton chessmen design registered by Nathaniel Cooke in March of 1849 and exclusively manufactured by Jaques of London. The Knight design has been modified and is the unique feature common to all members of the Imperial Collector Series. We have faithfully retained the design of the Staunton Bishop’s wide, open-mitered headpiece. Originally, this was an abstract representation of a flame (tongues of fire), the ecclesiastical representation for Wisdom, which in Christianity represents enlightenment imparted by the Holy Spirit. Contemporary Bishop designs have lost that original religious connection.