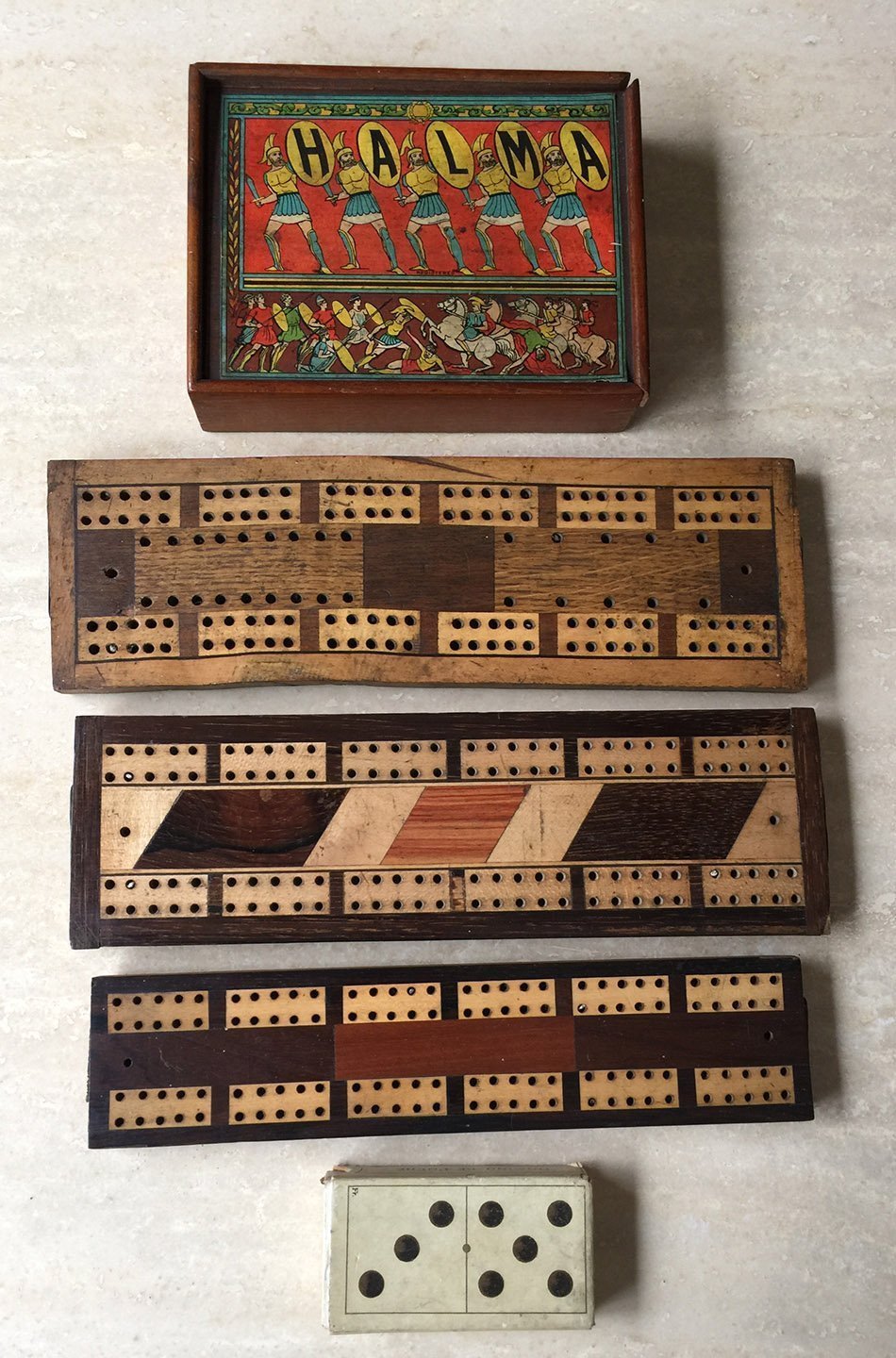 Offered here is a unique grouping of a set of Halma playing pieces in their original Mahogany slide-top box, circa 1860; three Cribbage boards with internal storage compartments and two bone pegs; and a rare and complete set of Règle de Jeu Dominoes playing cards. All items are in very good to excellent condition.

Halma (from the Greek word ἅλμα meaning “jump”) is a strategy board game invented in 1883 or 1884 by George Howard Monks, a US thoracic surgeon at Harvard Medical School. His inspiration was the English game Hoppity which was devised in 1854. It is strongly related to Chinese Checkers, but the piece movements are different.

The game board is checkered and divided into 16×16 squares. Pieces may be small checkers or counters, or wooden or plastic cones or men resembling small chess pawns. Piece colors are typically black and white for two-player games, and various colors or other distinction in games for four players. This set uses red, white, turquoise and black.

The game is played by two or four players seated at opposing corners of the board. The game is won by being first to transfer all of one’s pieces from one’s own camp into the camp in the opposing corner. For four-player games played in teams, the winner is the first team to race both sets of pieces into opposing camps. On each turn, a player either moves a single piece to an adjacent open square, or jumps over one or more pieces in sequence. A comprehensive summary of the history, rules and Halma variants can be found at:

Dominoes (or dominos) is played with rectangular “domino” tiles. The domino gaming pieces make up a domino set, sometimes called a deck or pack. The traditional domino set consists of 28 dominoes, often referred to as bones, cards, tiles, tickets, stones, or spinners. Each domino is a rectangular tile with a line dividing its face into two square ends. Each end is marked with a number of spots (also called pips, nips, or dobs) or is blank. A domino set is a generic gaming device, similar to playing cards or dice, in that a variety of games can be played with a set. A complete summary of the history, rules and dominoes variants can be found at: https://en.wikipedia.org/wiki/Dominoes