Skip to content
The House of Staunton is proud to offer another exquisite masterpiece – The Club-Size 1849 Cooke Series Staunton pattern Precision Chessmen. It is an accurate recreation of the very first Boxwood and Ebony Staunton Pattern Chessmen, registered by Nathaniel Cooke in 1849. This is a full Club-size set, features a 4-3/8″ King with a 1-7/8″ diameter base.

The Ebony Chessmen are very heavily weighted using Frank Camaratta’s proprietary weighting system that will prevent your chessmen from ever developing hairline cracks, a problem prevalent in new and antique weighted Ebony chessmen. These chessmen are accurate – right down to the small green registration lozenges

on the underside of each piece plus the impression of a red king’s crown on the summits of one Knight and Rook from each army to designate the Kingside piece.

Each set of the chessmen is cushioned in green English baize and housed in an accurate reproduction of the original baize-lined, hand-dovetailed Mahogany box, complete with the small green Staunton Chessmen label placed on the underside of the lid and the antique white manufacturer’s label, hand-signed, bearing the unique production number of each set, affixed to the underside of the box. The box features a cast brass keyhole escutcheon, brass stop hinges and an authentic semi-mortise lock and key set – exactly like the original! 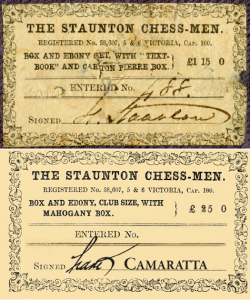 The Chessmen are new and each set consists of 34 Chessmen, including four Queens, a standard that was introduced by The House of Staunton over 20 years ago.

There is some controversy as to who actually designed these revolutionary chessmen, Nathaniel Cooke, John Jaques or Howard Staunton. What is known is that, on 1st March, 1849, Nathaniel Cooke, 198, Strand, London, registered an Ornamental Design for a set of Chess-Men, under the Ornamental Designs Act of 1842. The new chessmen bore the name of the most prominent player of that time, Howard Staunton. The right to manufacture these new chessmen was acquired by John Jaques, who began to supply the retail trade on 29 September, 1849.

On the same day, the following advertisement appeared Illustrated London News: “A set of Chessmen, of a pattern combining elegance and solidity to a degree hitherto unknown, has recently appeared under the auspices of the celebrated player Mr. STAUNTON. A guiding principle has been to give by their form a signification to the various pieces – thus the king is represented by a crown, the Queen by a coronet.  The pieces generally are fashioned with convenience to the hand; and it is to be remarked, that while there is so great an accession to elegance of form, it is not attained at the expense of practical utility. Mr. STAUNTON’S pattern adopts but elevates the conventional form; and the base of the Pieces being of a large diameter, they are more steady than ordinary sets. Illustrated London News, September 8, 1849.”

Shortly thereafter, the Morning Herald wrote: “A new set of Chessmen has recently appeared under the auspices of Mr. STAUNTON, who, observing their manifest superiority over the old figures in ordinary use, not only as works of art, but in the more practical necessities of convenience, has vouchsafed the guarantee of his name and recommendation. Those who have 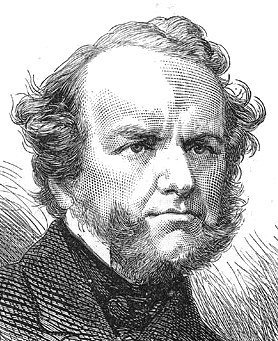 been in the habit of playing the game will remember the awkward, and inelegant structure of the generality of the shapes which have been in vogue. No artificial feeling until now has ever been brought to bear upon the formation of a pattern which should satisfy the eye both on the score of elegance and propriety.”

And the Morning Chronicle wrote: Mr, STAUNTON, the well-known Chess-player, has associated his name with a new and improved set of Chessmen, of which we have seen a specimen. The chief respect in which these Chess-men differ from the various kinds now in use in this country is that the form of each piece more effectually represents what is intended to be conveyed: as for instance, The King is surmounted by a crown, the Queen with a Queenly coronet, and so in like manner with the other pieces.

The rest is history. The Staunton pattern chessmen quickly became the World standard for serious and casual play. The relatively low production cost brought chess to the masses and did much to popularize the game. Its clean, simple design has never been equaled – the original design looks as modern today as it did upon its introduction over 145 years ago. 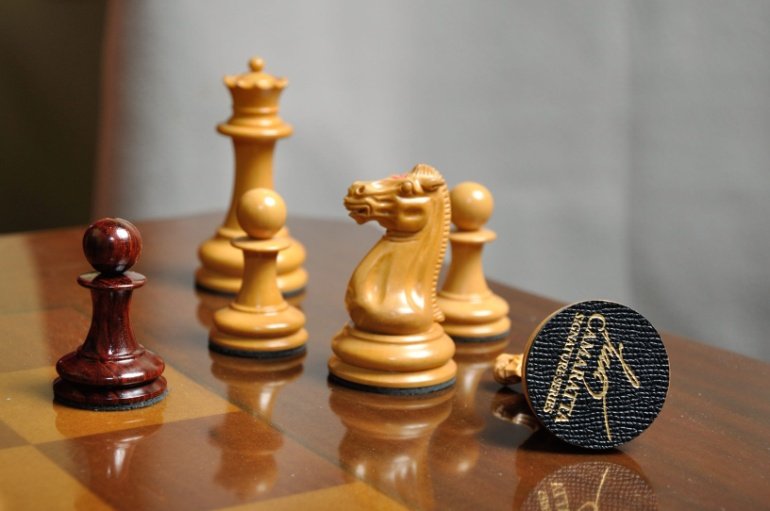 Here’s your chance to own a set of tournament-sized Staunton chessmen exactly as they looked when they first appeared in stores on September 29, 1849! Note the masterful workmanship on the original Knights derived from the noble steeds whose visages are captured in the Parthenon frieze (expropriated in 1806 by Thomas Bruce, 7th Lord of Elgin and since referred to as the Elgin Marbles), the distinctive, finely detailed Knight head was the hallmark of the Staunton design. The Chess pieces are hand carved by our master artisans and crafted out of the highest grade woods. The Chess pieces are heavily weighted with luxurious billiard cloth base pads on the other Chess pieces and a beautiful finish. The design of the 1849 Cooke Series Chess set embodies the form, board presence and craftsmanship of the original Staunton pattern Chessmen. The House of Staunton has recaptured the essence of these magnificent Chessmen and made them available on a very limited basis.

As with all of our Chess sets, the 1849 Cooke Series exemplifies a perfect combination of distinct beauty and functionality. It has been designed to withstand the rigors of practical play while maintaining an elegance which has become the hallmark of a House of Staunton chess set. The design, quality and craftsmanship of this set is UNMATCHED by any set of Chessmen at any price. Nothing even comes close!