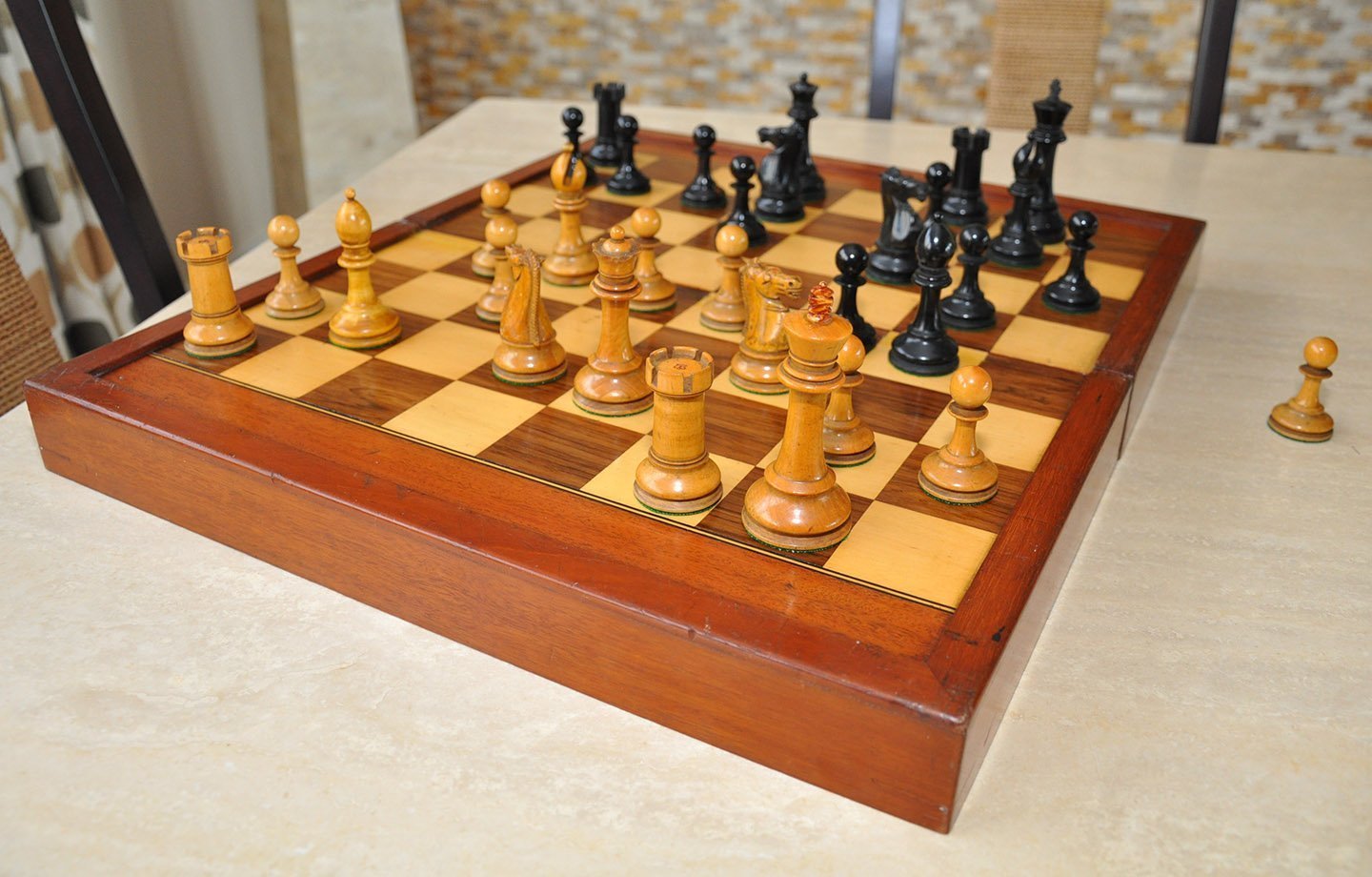 Offered here is a fine set of heavily weighted Boxwood and Ebony Hybrid Ayres Antique Staunton chessmen (SCA). This set of chessmen has a 4-0″ tall by 1-5/8″ diameter base King with all new green baize base pads. The chessmen are housed in a replacement lined hardwood box with curved dovetailed corners. These particular chessmen were produced around 1925, based on the detail of the Knight head which are typical in later chessmen of this type. The chessmen are in Average-to-good condition. The set has several replacement SCA chessmen from other period sets as evidenced by the somewhat smaller White Knight from a 3-5/8″ set, plus the red King crown stamps on all four Knights and both White Rooks (a dead give-away that this set has several replacements). Flaws include a few very small hairline cracks which are typical for this chessmen style, as well as a small chip on one point of the Ebony Queen’s crenelations, chipped ears to both White Knights, a chipped Boxwood Pawn collar and base. All the Bishops are original and none of their finials have been replaced. That aside, these chessmen have a very attractive patina and would make a great playing set. The folding chessboard shown in the images is for display purposes only and is not included in this offering, but can be purchased separately.

These chessmen are often attributed to F. H. Ayres or The British Chess Company. Probably, the most appropriate moniker that should be applied when referring to them is SCA (So Called Ayres) Chessmen. Regardless who actually produced these chessmen, they are of very high quality, almost the equal of Jaques of London chessmen from the 1930s.


The British Chess Company (BCC) was founded by William Moffatt (1843-1918) and William Hughes, and began manufacturing chess pieces in 1891 until their apparent demise in around 1907 or so.  The BCC attempted to compete for the chess set market against the established firm of Jaques of London. Their unique contribution to the design of Staunton chessmen, aside from their patented Imperial and Royal chessmen, was their use of Xylonite. Invented in 1869, Xylonite is a Celluloid, a class of compounds created from nitrocellulose and camphor. (Xylonite is generally considered the first thermoplastic.) Moffatt devised a method of reducing the cost or producing chessmen by molding the Knight heads from Xylonite. Carving the Knight heads can represent almost 50% of the total cost of producing a set of quality chessmen. In this manner, BCC was able to manufacture a set of high quality chessmen at half the cost of its competitors. It is sometimes claimed that BCC stopped producing their own chessmen around 1903, with other chess activities continuing for a few more years. However, that claim has not been substantiated and there is ample evidence that shows their still offering chessmen as late as 1907. Additional information on the British Chess Company can be found in the following article.