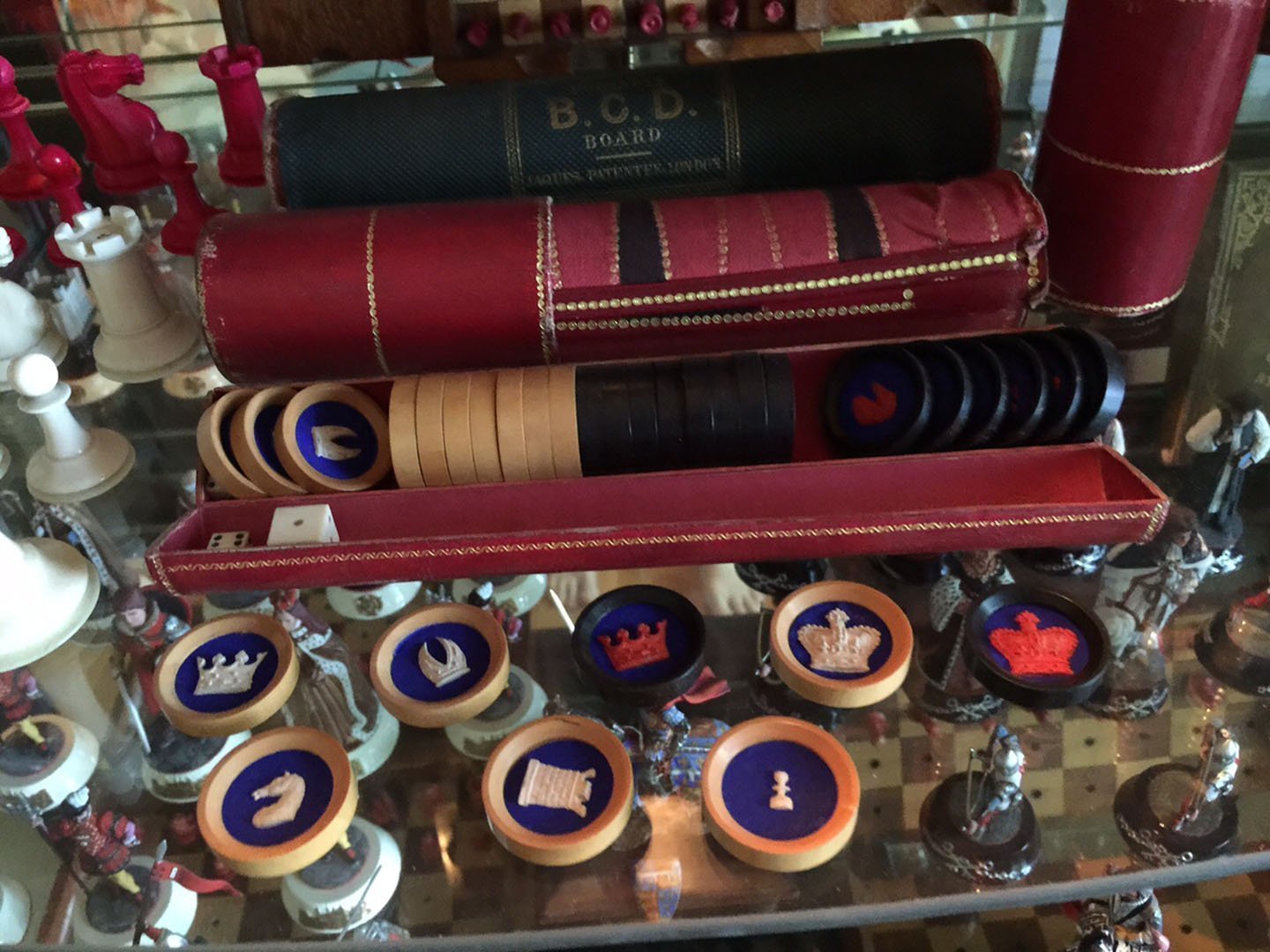 A circa 1860 Jaques BCD Portable Games Kit containing Backgammon, Chess and Draughts counters. The playing pieces are boxwood discs with ceramic symbols. The playing pieces are housed in a red leather, longitudinally opening storage cylinder. The storage cylinder and a folding red leather chess and Backgammon board are housed in a stippled green leather tube imprinted “Portable B.C.D. Board Jaques Patentee London. These unique games kits were first produced by the firm of Jaques of London and marketed from around 1850 up until WW II. The gaming pieces are 1-1/4″ in diameter by 1/4” thick.

A similar type of Games Kit was produced by AJAX, and have often been dubbed the WW II British P.O.W. Chessmen, which incorporated an escape kit comprising 32 separate pieces of compressed cardboard, each with an applied painted image of a chess piece. A wartime substitute for men in the services’. During WWII, Charles Fraser Smith of government Dept. CT6 and Christopher Clayton Hutton of MI9 were responsible for designing the many ingenious methods by which escape aids could be sent to British Prisoners of War. These were sent to P.O.W. Camps hidden in games and other items. Clayton Hutton explained that they “hid their escape aids in parcels containing’ games designed for the comfort and entertainment of the prisoners.”

The name Ajax undoubtedly refers to ‘Ajax the Great’ from Homer’s ‘The Iliad’. The use of the name Ajax might also allude to the ‘Trojan Horse’ and the saying ‘beware Greeks bearing gifts’. On the label the phrase ‘Patent applied for’, and the large full stop, were a method of indicating to the recipient of the chessmen that there were concealed escape aids. This was one of the principal indicators employed in the many games. Some games also incorporated hidden maps, the location the map covered had a corresponding code such as ‘Emerald’, ‘Double Eagle’ or ‘Dutch Girl’. It is possible that the name ‘Dorothy’, indicates the inclusion of a hidden map, either within the tube itself, or within the accompanying chess board.