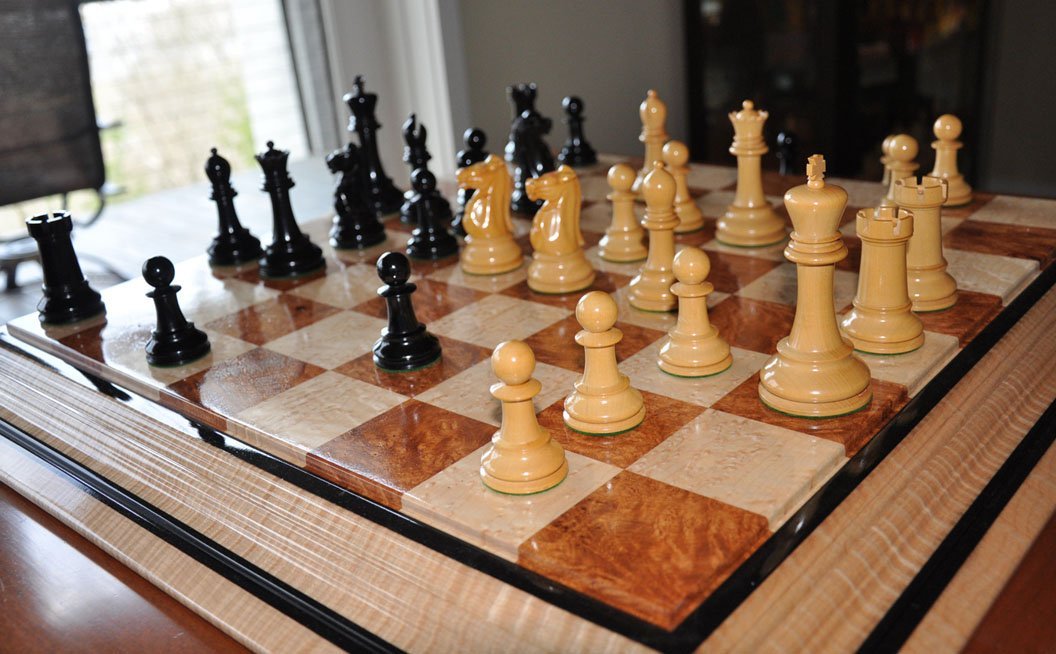 A set of Jaques Broadbent Chessmen, Small Club Size, Boxwood and Ebony Chessmen, heavily weighted and felted, with “Jaques London” inscribed on the base of both Kings.

This is a very attractive set with beautifully carved Broadbent Knights with drilled out pupils. The King stands 3-7/8″ tall with a 1-7/8″ diameter base. These are commonly referred to as Jaques small Club Size tournament chessmen. These Jaques Broadbent chessmen are housed in an original Mahogany hinge-top box with its original green manufacturer’s label. The chessmen are in excellent condition. The set is circa 1930. This style of Jaques Chessmen  is named after a similar, but larger, set of Jaques chessmen awarded to South-African born Reginald Joseph Broadbent. He was Northern Counties Champion 1933-46, the Surrey champion 1947, and the British champion in 1948 and 1950. The Signature Contemporary chessboard shown is not included in the sale, but is available.

The early unweighted wooden sets came in baize-lined mahogany hinge-top boxes as well as carton-Pierre caskets and had mechanically numbered labels. Later, the hinge-top boxes were replaced by mahogany slide top boxes with their labels on the top of the box. Weighted sets came in mahogany hinge-top boxes. Ivory sets came in carton Pierre caskets, mahogany hinge-top boxes and leather boxes (after around 1880), as well as large fitted Spanish Mahogany coffers. The Library size is always unweighted. The Standard size came both unweighted and weighted (after around 1855 or so).  The Small Club and Full Club sizes, like these Jaques Broadbent Chessmen,  were always weighted. Ivory sets were never weighted. All wooden sets came with green (Orange-yellow, briefly in the 1850s and white in the early 1900s) labels with facsimile signatures after around 1850-1851. Ivory sets came with red labels. The earliest labels were white or pale blue and the first 1000 were hand-signed and numbered by Howard Staunton and had “Jaques London” impressed on their labels.