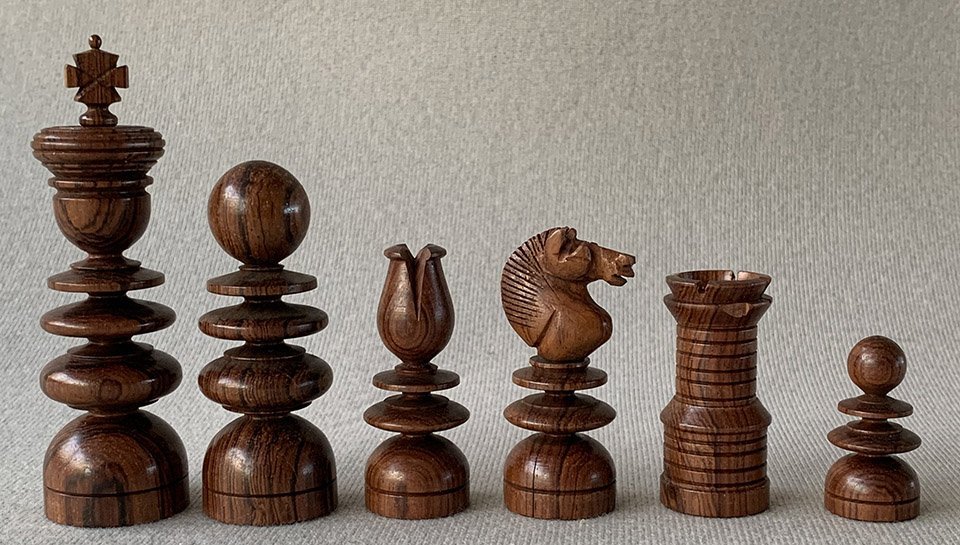 Offered here is a scarce example of a Boxwood and Rosewood English Pattern Chess, unweighted and unfelted, with a King height of 4″ and a base diameter of 1-1/4″.  The chessmen have developed a pleasing patina and are in excellent condition. The chess pieces are housed in a replacement box. The chessmen are late Victorian period, around 1890, produced and sold by the Firm of John Jaques from his London workshops. English Pattern Chess Sets in Rosewood are uncommon and very few of these sets have appeared in the marketplace. Usually, these chess pieces were turned and carved from Boxwood and Ebony. The chessboard shown is not included, but a suitable chessboard can be found elsewhere on this site.

The attached image shows an ad by Jaques of London from the ABCs of Chess, 10th Edition, by “A Lady”  (Harriet Ingram Cooke). The original Saint George (or St. George) pattern chessmen were a variation of the ubiquitous English Pattern chess sets, modified by replacing of the cross finial with a simpler ball or plume and lack of reeding on the King’s headpiece. The St. George Chess Sets were designed for the Saint George Chess Club and first appeared around 1840. This is a very practical chess set design and was in common use through the early 20th Century. Aside from Jaques (see Jaques 1860 Pattern Book Image), chessmen of this type were produced by John Calvert, William and Thomas Lund, F. A. Ayres, British Company, George Merrifield, and Hezekiah Dixon, among others.