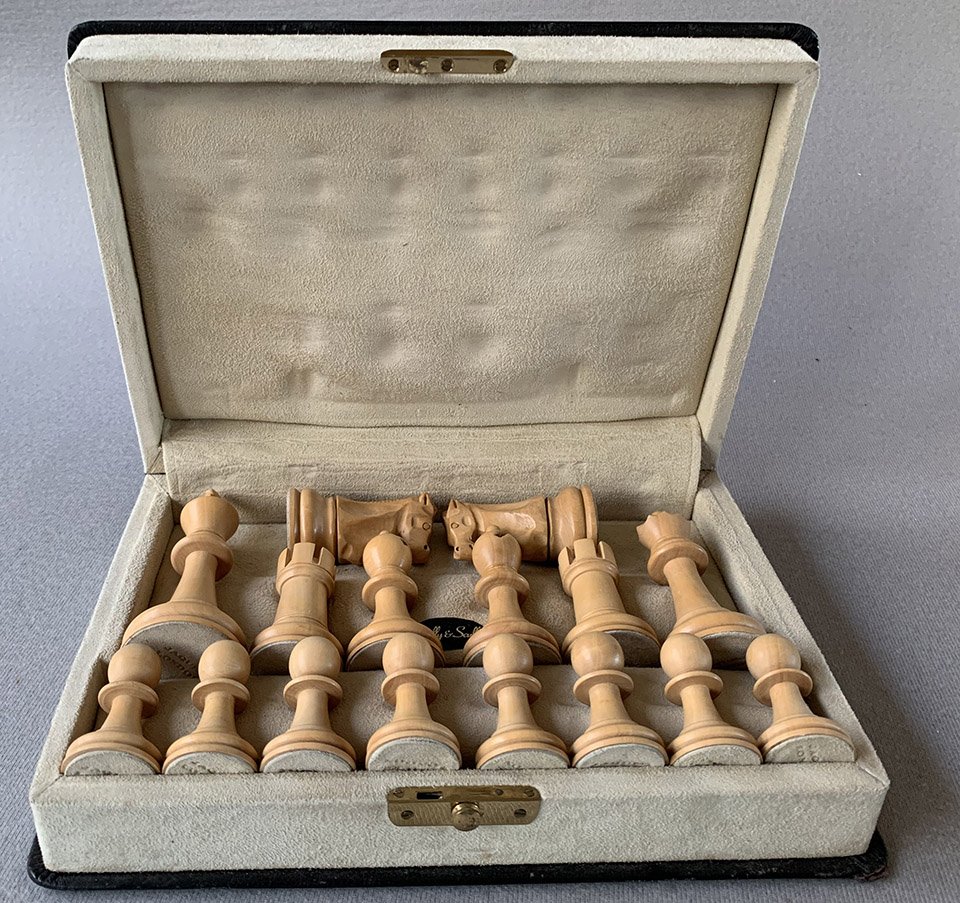 A Jaques Fischer Spassky Chess Set, circa 1980, made for Scully & Scully of Park Avenue in New York City. The chessmen are Boxwood and Ebony, heavily weighted with embossed suede leather base pads. The King stands 3-3/4″ tall. This King height is often referred to as the Tournament Size.  The White King is stamped “Jaques London ” on the rim of the base. The King side Rooks and Knights are stamped with a red crown on their summits. The Jaques Fischer Spassky chessmen are housed in their two original fitted Black Gold trimmed leather book volumes. Although lacking the exquisite craftsmanship and finish of the early Jaques chessmen, the Fischer Spassky design is very playable, durable, and has a great board feel. These HCessmen play and display best on a chessboard with 2-1/4″ squares. The chessboard shown is not included with this sale, but a suitable chessboard can be found among our extensive selection of new and antique chessboards. The recommended chessboard for Jaques Fischer Spassky Chess Set is offered here.

The Jaques Fischer Spassky chessmen are the style chessmen demanded by Robert J. (Bobby) Fischer for his World-famous 1972 Cold War Era World Championship match with Soviet Grandmaster and then World Champion Boris Spassky. Fischer’s win broke the 30 year iron grip the Soviet Union had held on the World title. The match was full of suspense and possibly the most followed sporting event of the century. It featured the drama of Fischer’s refusing to continue play after his demands were not met, plus phone calls from then President Richard Nixon and Secretary of State Henry Kissinger imploring him to play “for the honor of his country.” In spite of falling behind 2-0, Fischer stormed on to win the match by an impressive 12.5 – 8.5. The result is even more impressive if you exclude Fischer’s forfeiting Game 2!

The Geoffrey Parker story starts in 1958 when he started to produce a range of leather-bound books, from classics to stationary – most of them pocket size. From “Beefeaters” to Ocean liner’s “flags”, the books were lovingly hand painted and sold to tourist gift shops, museums, great cruise companies such as P & O and Cunard, to exclusive boutiques and designer labels. One such contact was Alfred Dunhill, who’s grandson, Richard Dunhill, approached Geoffrey and asked him to make an inlaid leather chessboard. Geoffrey soon discovered that the ancient skill of inlaying leather was a particular craft which came easily to him and his growing team of craftsmen. As often happens to a small specialty company, a request by a well-recognized company starts the company of the road to success. That fortuitous association with Dunhill started led the Geoffrey Parker Company on the journey that led to their preeminent position as the world’s leading maker of high-end leather games and leisure goods.

After that inaugural chessboard success, the company sought out to team with the best in the business. Their first successful encounter was with the firm of John Jaques of London, who have been inseparable from the famous Staunton Chessmen since being chosen to manufacture that now famous design which went on to become de-rigueur for all World Championship play from 1849 onwards and still holds that vaulted position today. By the early Seventies the Company had already established itself as No.1 in The World for luxury board games. This ultimately led to Geoffrey’s being commissioned to make the leather boxes and chessboards for the World famous 1972 championship Match between the then World Champion, Boris Spassky from the Soviet Union, and the flamboyant American Robert James “Bobby” Fischer, held in Reykjavik, Iceland.