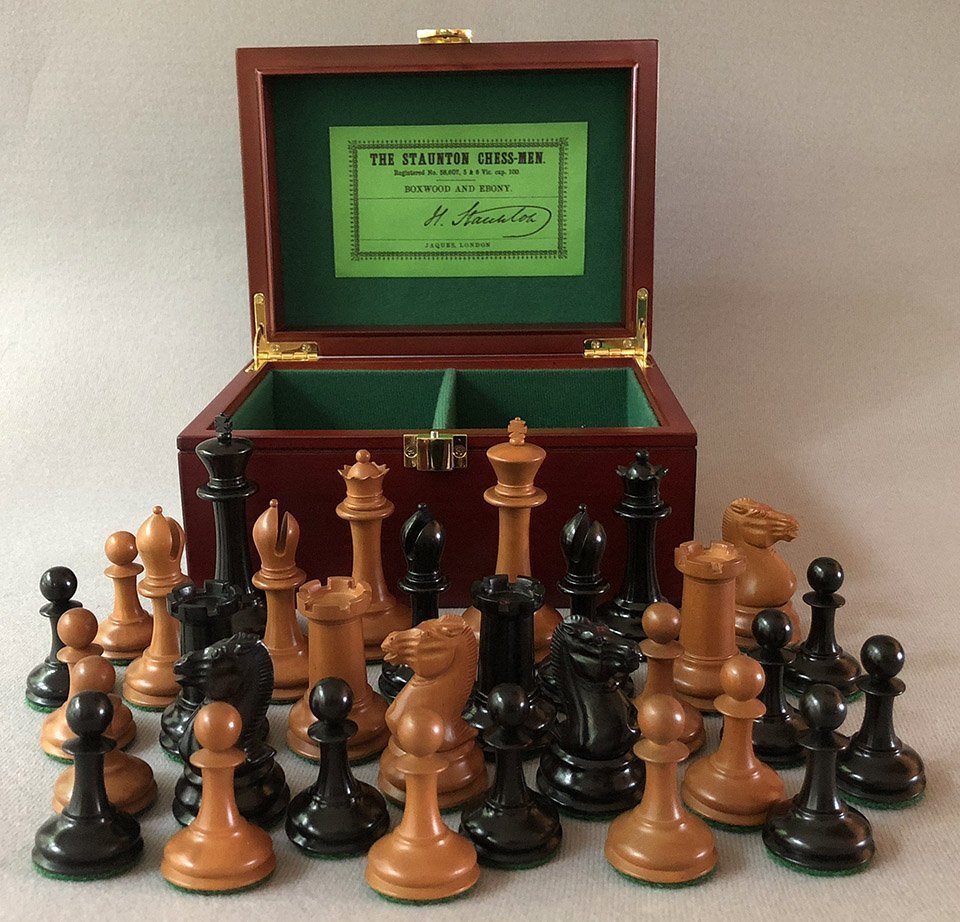 Here is a set of reproduction circa 1853 Jaques Harrwitz Staunton Chessmen, antiqued boxwood and ebony, 3-1/2″ King with a 1-5/8″ diameter base, weighted and felted. The Knights are of the Harrwitz style, and the Bishops are very attractive with very wide, almost vertical miters and more bulbous headpieces. The design was researched and reproduced by noted Chess set designer and historian, Frank Camaratta. The chessmen were named after Daniel Harrwitz, a strong British Chess Master active during the 1850s who distinguished himself by losing a match to Paul Morphy. The original Jaques Harrwitz Staunton Chessmen produced by Jaques were always unweighted and were manufactured two qualities, the lesser one had a label marked “Second Quality”. This set is housed in a hinge-top mahogany box with a correct facsimile green label showing: “THE STAUNTON CHESS-MEN. The Jaques Harrwitz Staunton Chessmen play and display best on a chessboard with square sized between 2-0″ and 2-1/4″.

For a complete selection of our finest new and antique chessboards, please click here.  For a short history of the John Jaques Company and the Staunton Chessmen, click here. An image showing the original Jaques Harrwitz Staunton Chessmen is shown on the left. A comparison of our reproduction Harrwitz chessmen with the original Jaques Harrwitz chessmen is shown in the galley on the left.

Daniel Harrwitz was born in Breslau (Wrocław) in the Prussian Province of Silesia, on 29 April 1823. He was a Jewish German chess master. Harrwitz established his reputation in Paris, particularly as a player of blindfold games. He lost a match in England to Howard Staunton in 1846 at odds of a pawn and two moves and drew a match with Adolf Anderssen in Germany in 1848.

Harrwitz lived in England from 1849, and founded the British Chess Review. In 1856 he moved to Paris, where he won a match against Jules Arnous de Rivière. In 1858 he played a match against Paul Morphy in Paris. Harrwitz won the first two games, but lost the match 5½-2½. Although he had a negative record against Morphy, he was one of a few masters who beat Morphy with the black pieces.  Harrwitz withdrew from the match, allegedly on grounds of ill health. He subsequently retired to the Austro-Hungarian county of Tyrol, dying in Bolzano in 1884.