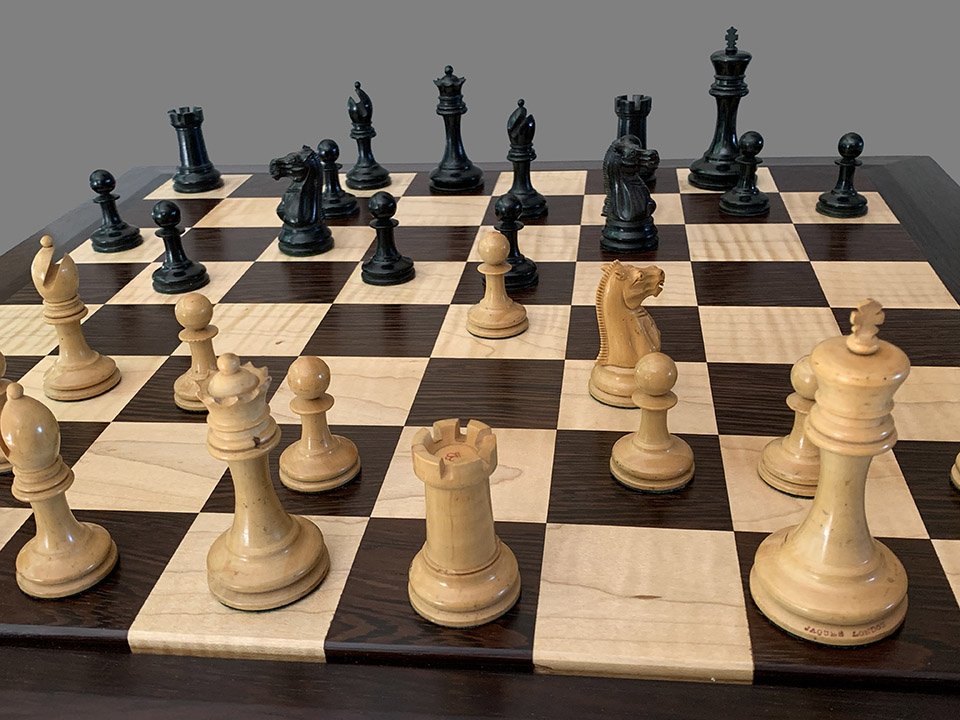 Offered here is a spectacular set of Antique Jaques Lasker Chessmen, Small Club Size, circa 1885. The chess pieces are Boxwood and Ebony. The King stands 4-0″ tall with a 1-7/8″ diameter base. The chessmen rest atop green English baize base pads and are heavily weighted. The Knights are of the Lasker style. Older Jaques chess sets with the 4-0″ King are the most difficult to find, since this was not a very popular size prior to WWII. The 4-0″ King height is often referred to as the “Small Club Size.” This is an early set of Jaques Lasker chessmen, since only the White King is stamped “Jaques London ” on the rim of the base. The Kingside Rooks and Knights are stamped with a red King’s crown on their summits. The Knights are very finely carved. These chess pieces have developed a peasant honey-hue over time. The chessmen are housed in their original Mahogany hinge-top box with its original green label which is partially torn. These chess pieces were produced between 1880 and 1885. The chessmen are in excellent condition, the green baize-lined mahogany box is very good with the upper locking tang missing. There is no chessboard included. These chessmen play and display best on a chessboard with 2-3/8″ squares. For a complete selection of our finest new and antique chessboards, please click here. For a short history of the John Jaques Company and the Staunton Chessmen, click here. Some interesting historical articles about chessmen and collecting can be found here.

Between his 1896–97 World Championship re-match with Steinitz and 1914, Lasker has three successful defenses of his title. In his 1910 match with Carl Schlechter, Lasker was lucky to escape with a 5-5 draw due to a match provision requiring the Challenger to win by a two-point margin. Going into the final game, Lasker was down 4-5. Needing to win by a two-point margin, Schlechter, forced to play the last game for a win, over-pressed in a better position and lost.  Lasker was in his early 50s when he finally lost the world championship to Capablanca and effectively retired from serious chess.