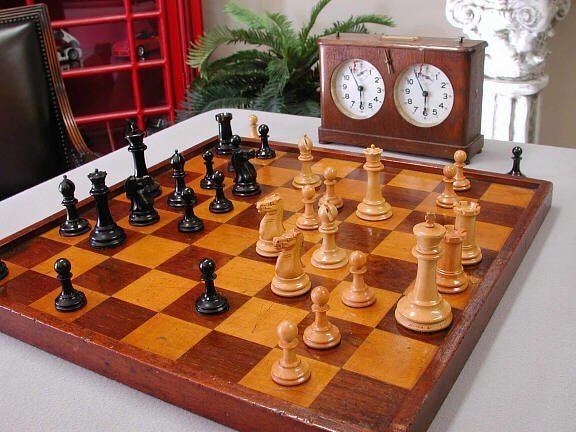 A circa 1865  set of Boxwood and Ebony Jaques Library Size Steinitz chessmen, (Megamouth) unweighted and felted, with “Jaques London” inscribed on the base of the White King. A very attractive set with heavily carved Steinitz-style Knights and the drilled out pupils. The King stands 2-7/8″ tall. These are commonly referred to as the Jaques Library Size chessmen.” The Jaques Library Size Steinitz Staunton chessmen are housed in their original Mahogany slide-top box with its original green manufacturer’s label. The chessmen are circa 1865 and play and display best on a chessboard with 1-7/8″ or 2-0″ squares. The chessboard shown is not included in the sale. For a complete selection of our finest new and antique chessboards, please visit https://chessantiques.com/product-category/chessboards/