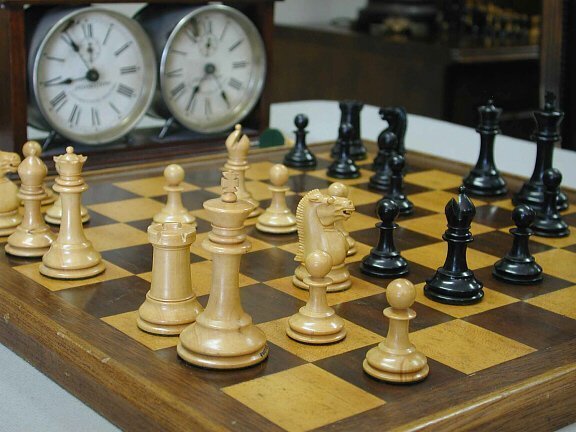 A circa 1865  set of Boxwood and Ebony Jaques Library Size Zukertort chessmen, unweighted and felted, with “Jaques London” inscribed on the base of the White King. A very attractive set of Staunton Chessmen with finely carved Zukertort-style Knights and the drilled out pupils. The King stands 2-7/8″ tall. These are commonly referred to as the Jaques Library Size chessmen.” The Jaques Library Size Zukertort chessmen are housed in their original Mahogany slide-top box with its authentic green manufacturer’s label. The chess pieces are circa 1875. They play and display best on a chessboard with 1-7/8″ or 2-0″ squares. The chessboard shown is not included in the sale. For a complete selection of our finest new and antique chessboards, please click here.  For a short history of the John Jaques Company and the Staunton Chessmen, click here.

Johannes Hermann Zukertort (Jan Hermann Cukiertort) was born on 7 September 1842. He died on 20 June 1888. Zukertort was a German-Polish Grandmaster. He was one of the World’s top players. Zukertort filled his relatively short life with a wide range of other achievements as a soldier, musician, linguist, journalist and political activist.

Zukertort learned to play chess in Breslau when he was 19. He studied with Adolf Anderssen. Zukertort developed into one of the most successful tournament players of his time. He was also an outstanding match player. Due to the lack of top-level tournaments, Zukertort’s best performances were mostly in match play, notably against Anderssen in 1871 and Joseph Henry Blackburne in 1881.

In 1872, he played Wilhelm Steinitz in London, losing 9–3. Poor health and lack of physical stamina appeared to be one of Zukertort’s long-term weaknesses. Some commentators attributed illness to the severity of his defeat in the 1872 match against Steinitz.

Although Zukertort lost both his matches against Steinitz, he proved to be one the World’s leading players throughout the late 1870s and early 1880s. In the 1883 London tournament, he won 22 of his first 23 games. That was enough to give him an insurmountable lead. Unfortunately, his lack of stamina and poor health cost him his last three games. This weakness was to haunt him again in his quest for the World title. The 1886 World Chess Championship match lasted from 11 January to 29 March 1886. After building up a 4–1 lead Zukertort wilted, lost four of the last five games and lost the match by 12½–7½.

After this defeat, Zukertort’s health suffered and he was a greatly weakened player for the remaining two years of his life. Diagnoses of his ailments include rheumatism, coronary heart disease, kidney problems, and arteriosclerosis. His results after the 1886 match declined steeply. Zukertort died 20 June 1888, in London from a cerebral hemorrhage after playing a game in a tournament Simpson’s Divan, which he was leading at the time. He is buried in Brompton Cemetery in London.