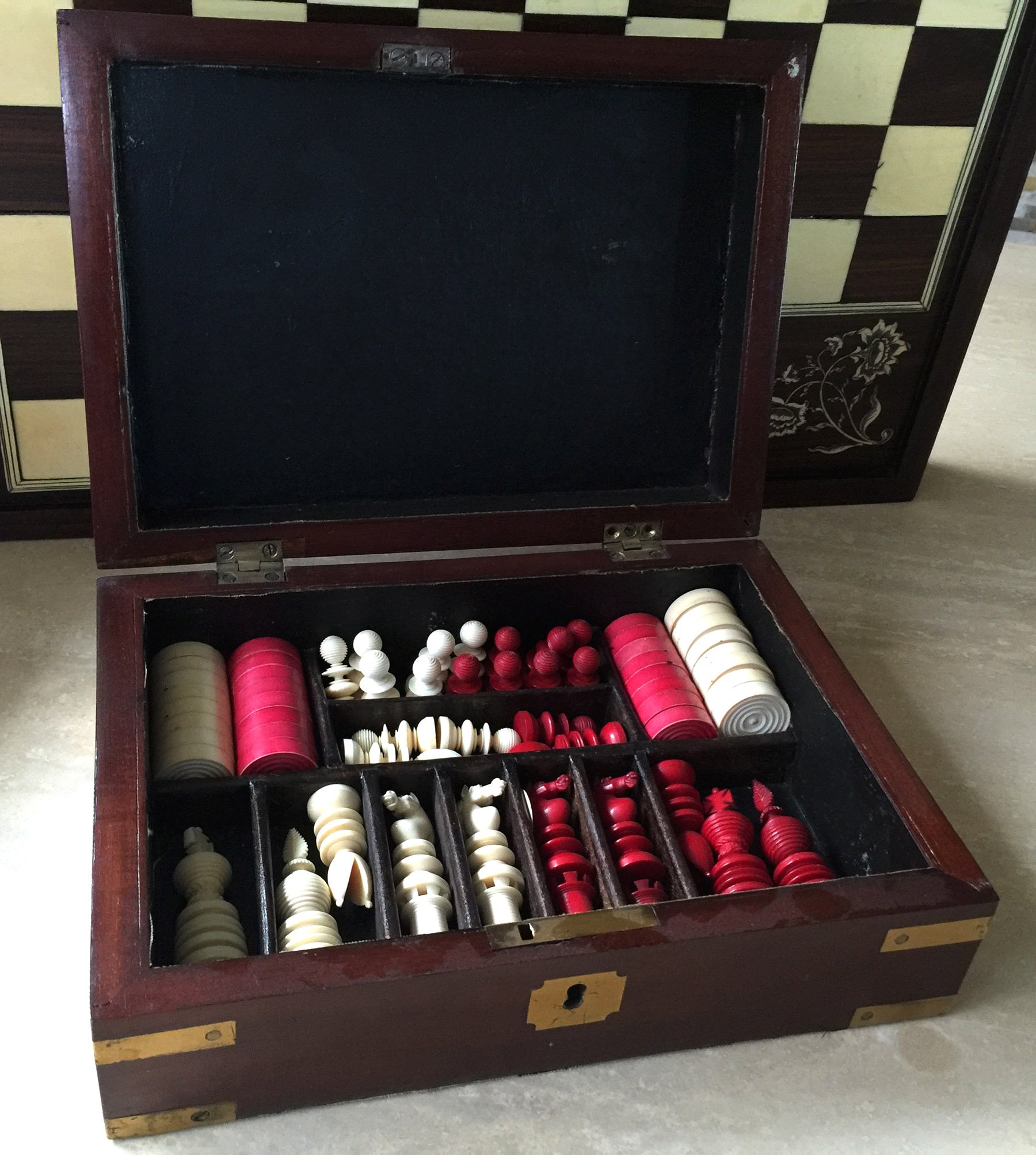 A Jaques Lund Antique Chess Set with Draughts in a compartmentalized box with brass straps and corners. The Chess and Draughts set was probably manufactured by the firm of John Jaques & Son at 102 Hatton Garden, London, around 1865 – 1870. Although very Lund-like, the Knight faces closely resemble those produced by Jaques in the 1860s. These Jaques Lund antique chess pieces and draughts are natural and red-stained. The King stands 3.2” tall with a 1.0″ diameter base. The slab-sided draughtsmen are 1.2″ in diameter and are 0.2″ thick with concentric ring turning. The chessmen are in excellent condition with a sound, strong red color. The red draughtsmen are slightly faded. These stunning Jaques Lund Antique Chess pieces are housed in a period Coromandel box with inlaid brass escutcheons and corner straps.

The design of the chessmen has the distinctive Lund pattern features, ribbed baluster body with stepped domes bases, reeded Kings’, Queens’ and Pawns’ headpieces, the Maltese cross surmounting the Kings and the feather finials surmounting the Queens. Thomas Jaques was a partner in Ivey and Jaques in 1894, doing business at 34 Leather Lane, Holborn.  After the passing of Ivey around 1895, Thomas took control of the company.  The company was renamed Thomas Jaques, Ivory Turner in 1897. Around 1818, Thomas operated from 22, Baldwins

Gardens, Leather Lane. He advertised as Jaques T. & I. Wholesale Ivory & Hardwood Turners, Tunbridge-ware Manufacturers, and Dealers in Ivory and Hard Wood.  It is not clear when Jaques started producing chess sets. The earliest record of chessmen designed and manufactured by Jaques is 1828, when the firm designed a chess set for the grand opening of Simpsons Chess Divan on the Strand, which became Mecca for all the best chessplayers of the 19th Century.  In 1838, they began operations at the 102 Hatton Garden location. The advertised themselves as Jaques John, Wholesale Ivory & Hardwood-turner, Desk, Dressing-case & Work-box-manufacturer, & Dealer in Ivory & Hardwood, 102 Hatton garden & 65 Leather lane. In 1849, they were instrumental in revolutionising the chess world by becoming the sole manufacturer for the new Staunton chessmen, which were registered by Nathaniel Cooke in March of 1849. Jaques chessmen soon became the Gold Standard and chess sets bearing the Jaques name bring exceptional prices at auction. The company, now John Jaques and Sons, is still in business and, aside from chess sets, produce a wide range of sporting goods.

Lund Pattern chessmen are a subset of the English Type I Playing sets. Aside from Lund, these sets were also made by Jaques of London, as illustrated in the adjoining image. The Lund sets featured finely turned chessmen with ribbed baluster bodies with stepped, domed bases, and very distinctive Knight heads. They were offered in several different sizes and configurations. Sizes can range from a small 2-5/8″ King to full-size sets measuring 4-3/4″ and larger. Kings in the better sets will have reticulated crowns surmounted by a large Maltese cross finials with either three or five small spherical adornments. The Queens have spherical reticulated headpieces surmounted with one of three finial types. The finial types are a feather finial, the more decorative fleur-de-lis finial and a simple reticulated sphere. Some sets were also produced with the Queens lacking a finial. Lund style chessmen suffer from the same instability problems as many pre-Staunton designs.

The term English Type I Playing Set is used to describe a range of English Playing chess sets, primarily fabricated from ivory, and made mostly, but not uniquely, in England during the 19th century. This poplar chess set design is characterized by narrow tapered, ringed bodied, Kings and Queens. The Kings will normally have reeded crowns surmounted by Maltese Cross finials. The Queens will normally sport either a Feather or Fleur de lis  finial mounted atop a reeded spherical headpiece. Rooks are normally stout, full-bodied towers, often sporting tapered staffs or flags. English Type I Playing Chess Sets first appeared at the beginning of the 19th century and were in common use through the early 20th Century. Aside from Jaques, English Type I chessmen were produced by William and Thomas Lund, John Calvert, John Jaques, George Merrifield, Fischer, Hezekiah Dixon and Charles Hastilow, among others.