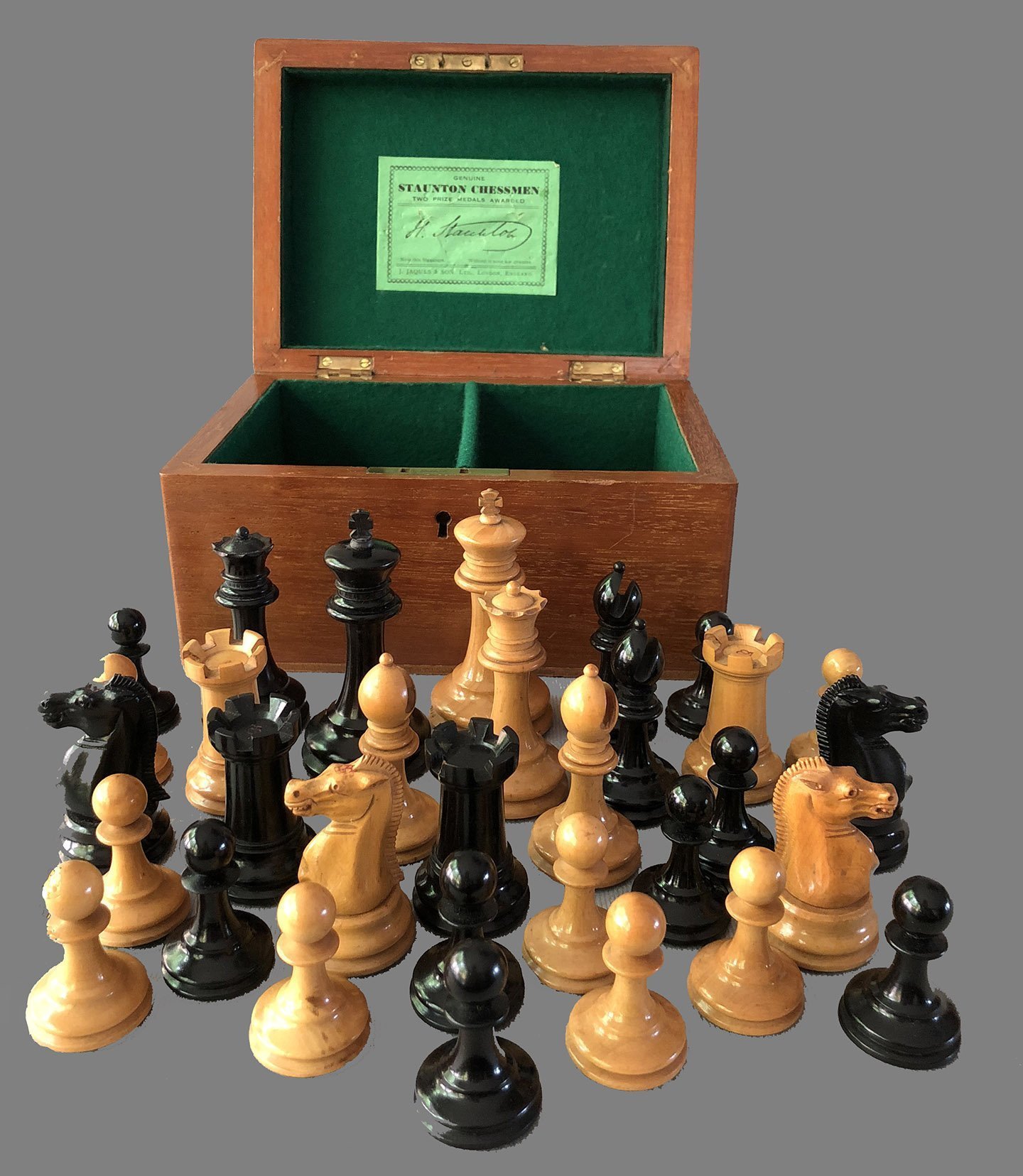 A set of Antique Jaques Tournament Zukertort Chessmen, Boxwood and Ebony, weighted. These authentic Staunton chess pieces rest atop green baize base pads. “Jaques London” is inscribed on the base of the White King. This is a very attractive true Staunton set with masterfully carved Knights. The King stands 3.5″ tall with a 1-3/4″ diameter base. In the advertisements. This size was referred to as the “Tournament size”. This set of Jaques Zukertort Tournament Chessmen is housed in a later Jaques Mahogany hinge-top box with a semi-mortise lock set and green manufacturer’s label. The chess pieces are in very good condition with wear consistent with age. These chessmen have developed a very pleasant honey-hue from almost 140 years of use. These Jaques  Tournament Zukertort chessmen were produced between 1875 and 1880. The chess pieces play and display best o a chessboard with 2-1/8″ or 2-1/4 squares. No chessboard is included in this sale. An extensive inventory of antique and contemporary chess timers can be found here.  The chessboard shown is not included in the sale. For a complete selection of our finest new and antique chessboards, please click here.  For a short history of the John Jaques Company and the Staunton Chessmen, click here.

Johannes Hermann Zukertort (Jan Hermann Cukiertort) was born on 7 September 1842 and died on 20 June 1888. He was a German-Polish Grandmaster and was one of the World’s top players.

Zukertort learned to play chess in Breslau when he was 19. Zukertort studied with Adolf Anderssen and shortly became one of the strongest players in Germany. Among his many notable matches, Zukertort defeated Anderssen convincingly (5–2; no draws) in 1871. In 1872, he played Wilhelm Steinitz in London, losing 9–3 (7 losses, 1 win, 4 draws). At the time, both were considered the world’s best players. Zukertort also lost to Wilhelm Steinitz in the 1886 World Chess Championship match, which is generally regarded as the first World Chess Championship.

Although Zukertort lost both his matches against Steinitz, he proved to be one the World’s leading players throughout the late 1870s and early 1880s. Due to the lack of top-level tournaments, Zukertort’s best performances were mostly in match play, notably against Anderssen in 1871 and Joseph Henry Blackburne in 1881 (6 wins, 2 losses, 5 draws). Nonetheless Zukertort was one of the most successful tournament players of his time: third place behind Steinitz and Blackburne at London, 1872; first place at Cologne and second at Leipzig in 1877; tied for first with Simon Winawer at the Paris 1878 chess tournament; second at Berlin in 1881, behind Blackburne; tied for fourth at Vienna in 1882 and first at London in 1883, 3 points ahead of Steinitz. Zukertort filled his relatively short life with a wide range of other achievements as a soldier, musician, linguist, journalist and political activist. He became a naturalized citizen of the United Kingdom in 1878