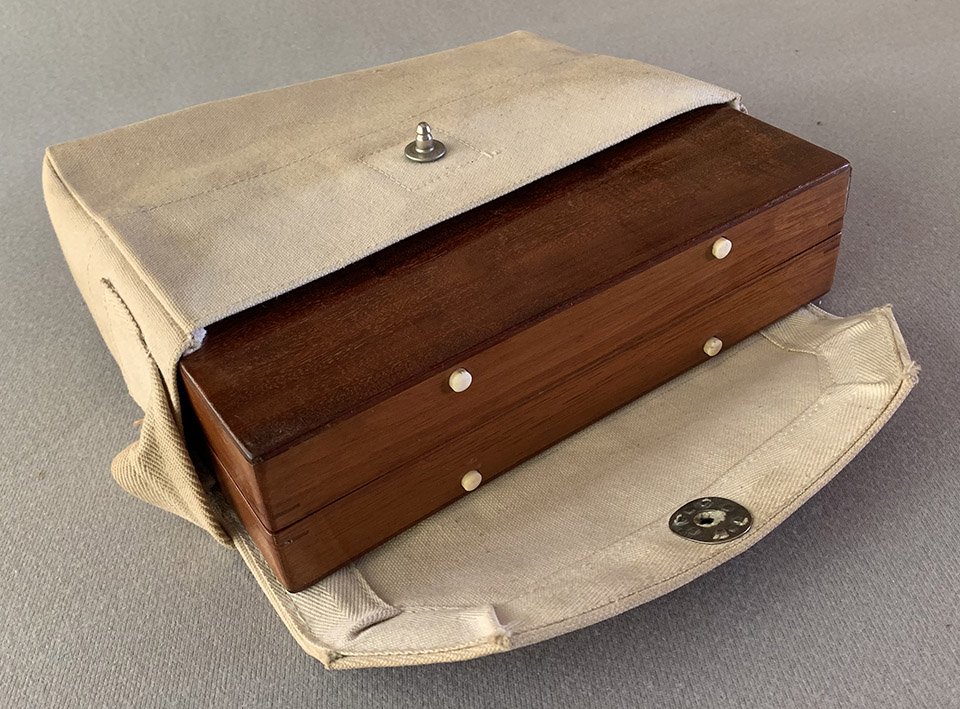 A Jaques Ivory Type 1 Status Quo Chess set, or more correctly “In Statu Quo.” This Type 1 Status Quo Chess Set measures 9-1/8″ x 9-1/8″ with red-stained and natural bone chessmen having a King height of 5/8″ by 7/8″ in diameter. The chessmen are housed in an off-white canvas carrying case case. Jaques patented the In Statu Quo Travel Chess Set in 1853. The chessmen have a metal peg inserted into each of their bases to enable the locking system to operate

. The Jaques Type 1 Status Quo Chess Set features a hinged folding board with an ingenious patented locking system. By depressing two white buttons located at each half of the chess board, the pieces are locked in place so the game can be halted midway and stored for a later date with the position kept in tact. An additional inside button unlocks the pieces. There is a brass slide on either side which locks the chessboard in the open position. This particular Type 1 Status Quo Chess Set was most likely produced around 1910.

The name “In Statu Quo   Chessboard ” is imprinted along one edge of the frame, and “Jaques Patentees  London” printed on the opposite side. The Rosewood and Holly chessboard is housed within the Mahogany frame.  The chess set has a replacement off-white canvas carrying case. The chess set is in excellent condition, although the red stain is somewhat worn consistent with age and usage.

Some Interesting History About This Set.

The following information accompanied this particular Jaques ISQ chess set. “The ‘chessboard’ was last used by my father in 1913 – 1915 when he was in the Roughriders, a London regiment that was in one of the last camel charges of the British army. He would play chess with a fellow officer on camel-back until the order was given to charge. The board was then locked and, when the dust had settled, unlocked and play resumed, on the assumption that both had survived. My father then switched to the Royal Flying Corps, where the opportunities for playing chess in the air were somewhat limited !”