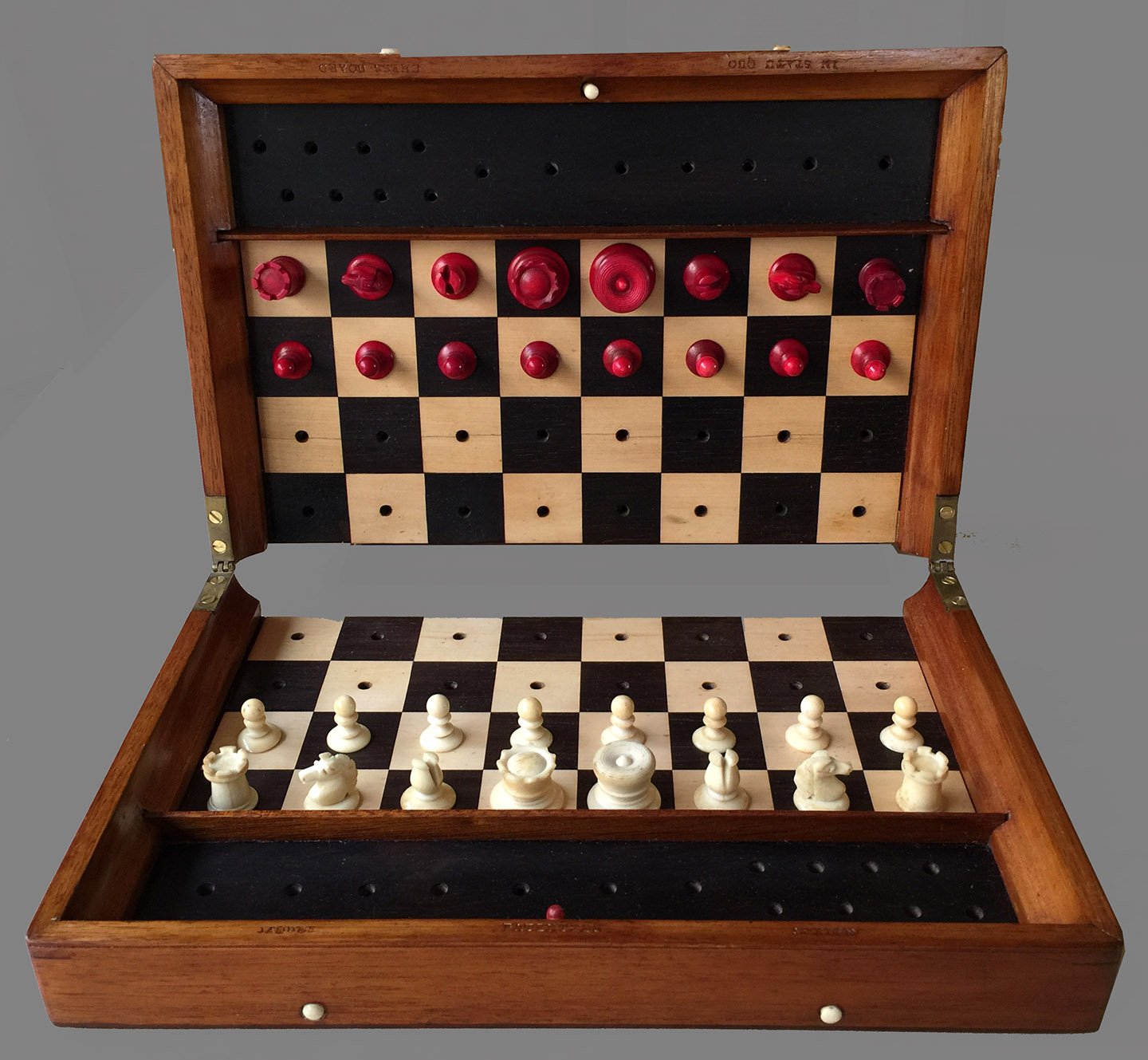 This is a rare example of a large Jaques Status Quo Travel Chess set, more correctly, “In Statu Quo”. This is the very rare large version of the Jaques Status Quo travel chess set, measuring 16-5/8″ long by 12-5/8″ wide. The red stained and natural bone chessmen have a King measuring 3/4″ tall by 1″ in diameter.

It has an additional section at each side of the board to store and secure captured pieces. The name “Jaques London” is imprinted along one edge of the frame. The set comes with its original black leather slip case which has been extensively restored and the original locking mechanism replaced with a modern lock set. The mechanism is in very good working condition and the board and chessmen are excellent. The extra area for the captured pieces was started in 1857, which means that the manufacture date of the set can be reasonably dated between 1857 and 1860.

The Jaques patent application is dated 1st July 1853 and was submitted on 2nd July.  The patent was granted on  16th August 1853.

The Jaques Status Quo travel chess set features a hinged folding board with an ingenious patented locking system. By depressing two bone buttons located at each half of the chess board, the chessmen, which have slotted brass pegs, are locked in place so the game can be halted midway and stored for a later date with the position kept in tact. An additional inside button unlocks the pieces. The Rosewood and Holly chessboard is housed within a mahogany frame. The chess set lacks its original leather case. The board, chessmen and mechanism are in excellent condition.

Jaques produced In Statu Quo portable chess sets in four basic sizes. These were available in either Red-stained and natural Bone or African ivory. Each chess set came housed in a Black leather carrying case with a lockable flap covering the small end of the case. The lockable outside of the flap had a gold embossed Jaques manufacturer’s emblem. To facilitate remembering which side had the move when the game was paused, there was a slider on the underside of the flap which would show either a red or a white swatch. Each case originally had a pull-ribbon to aid removal of the chess set. Few of these ribbons survived.

Jaques produced In Statu Quo portable chess sets in four basic sizes of two configurations each. These were available in either Red-stained and natural Bone or African ivory.