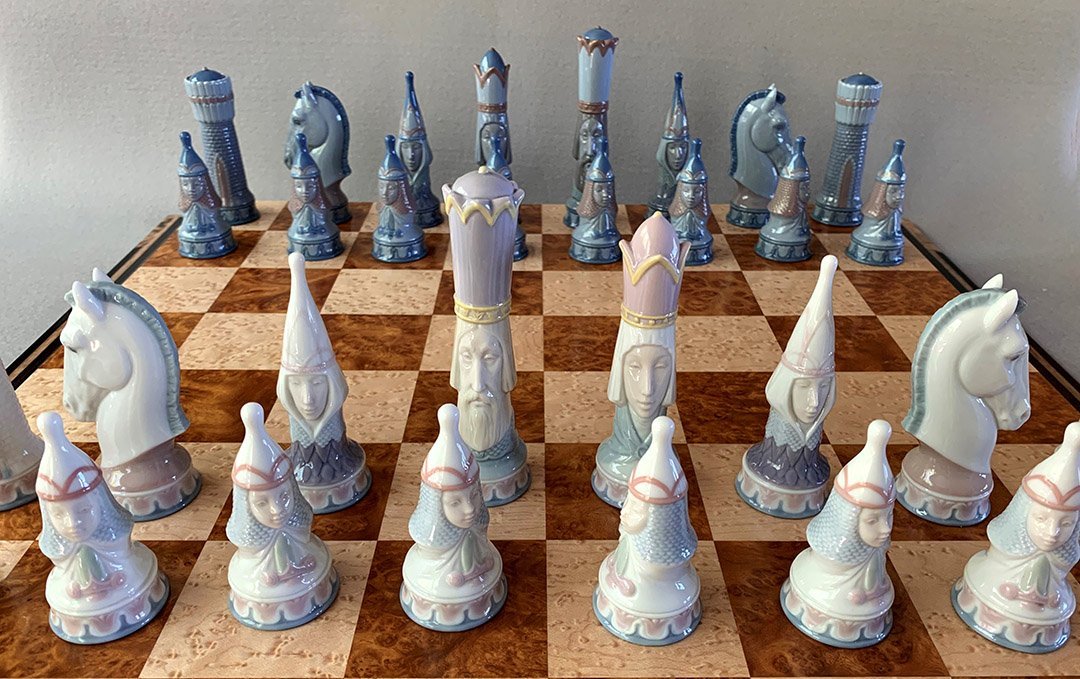 Offered here is a set of Lladró Medieval Porcelain Chessmen, Set No. 6333. These elegant Medieval Chessmen were produced by the well-known and respected Spanish Porcelain Company, Lladró. This polychrome Porcelain chess set features a 5-1/4″ King with a 1-1/2″ diameter base. The underside of each of the chess pieces bears markings from the factory and the sculptor and what appears to be a white inspection sticker #165.  The Lladró Porcelain chessmen were modeled to represent typical Medieval characters in the Gothic manner.  The Issue year for this series is prior to 2000. The sculptor is Juan Ignacio Aliena. Although created in the twenty-first century, these designs are influenced by the style of Europe’s Mannerist period (c. 1520–1600). The paintings of El Greco and other Spanish Mannerist artists featured people with characteristics typical of Lladró figurines.

Lladró is a Spanish brand, known for their creation of art porcelain figurines. The company has a single factory located in Valencia, a port city that lies on the southeastern coast of Spain. In 1953, at their home in the village of Almàssera, Lladró began to make their first ceramic creations, inspired by the works of the great European manufacturers of Meissen, Sèvres and Capodimonte. It is in this period that the modeling of flowers or the complex treatment of tulle first appeared, examples of virtuoso techniques that can be found today in many of the brand’s creations. At the end of this 1950s, Lladró opened its first store in Valencia, Spain. Lladró is the story of the passion for porcelain of three brothers, Juan, José and Vicente Lladró, artists and sculptors who made porcelain into a way of life and built a business empire.