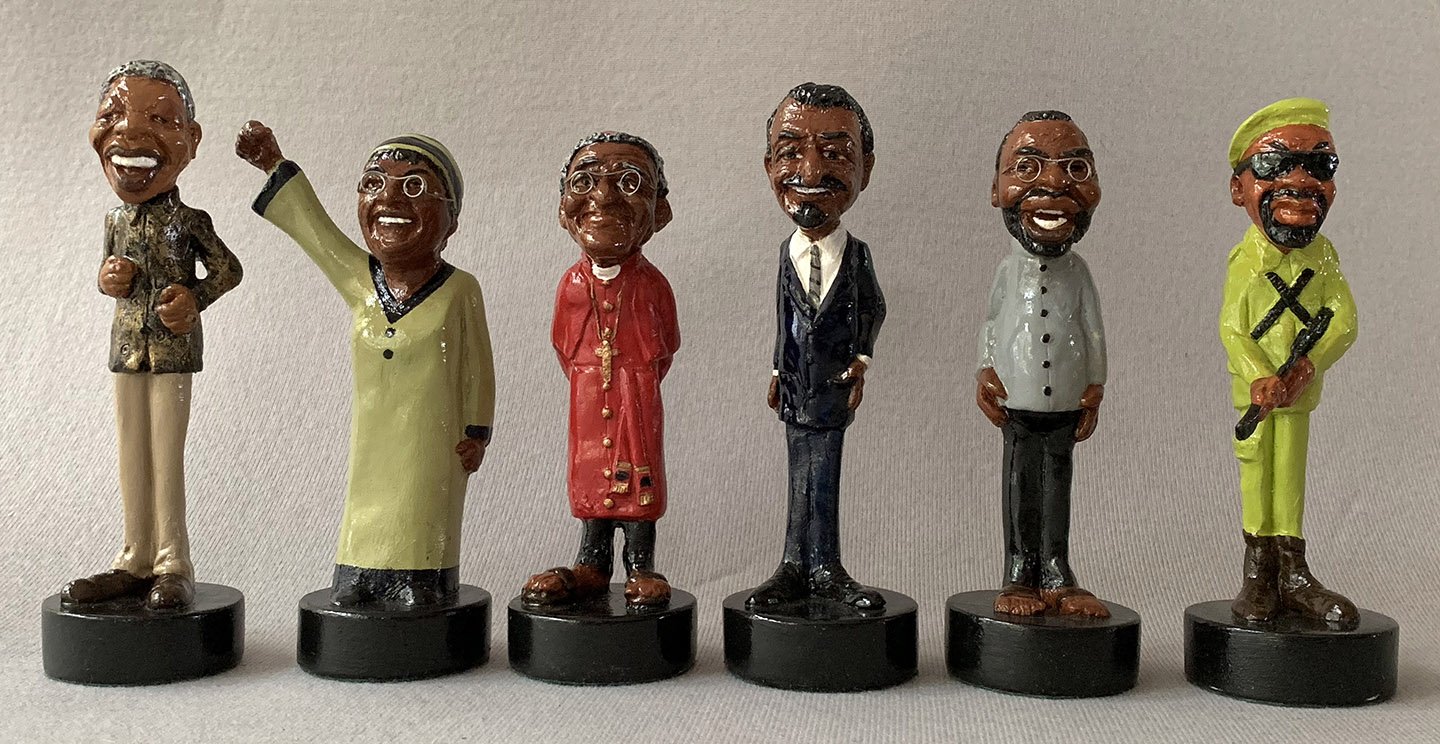 A very rare, Limited Edition, South African Political Chess Set and board in the original case sculpted and designed by Darren Aiken with its original signed and dated certificate of authenticity, dated 31 October 2005. Each of the chess pieces is extremely well crafted with whimsical expressions. Several of the chess pieces are wearing removable eyeglasses. With every hand-painted detail, with every lovingly carved engraving of these exceptional quality chess pieces you can almost feel Winnie Madikizela Mandela punching the air, Arch-Bishop Desmond Tutu grinning and Eugene Terreblanche frowning. The craftsmanship of this collector’s chess set is unmatched. This is set No.129 of a limited edition of 250.  The pieces approx.6′ tall. The chessboard is Plexiglas with white and Black squares. A black wooden storage box completes the package.

In 1994 the South African National Party fell to the ANC and F.W. De Klerk was succeeded by Nelson Mandela. Thus ended the infamous Apartheid regime. Although the apartheid era has been replaced by a free democratic society, Let’s never forget the people who were involved in the transition.

All the chess pieces in this unique chess set were hand-sculptured by the Darren Aiken and produced from custom-made, hand-designed molds, followed by hours of in hand-painted coloring, with a focus on intricate detail. A black and white Plexiglas chessboard completes the package.

The King
Nelson Mandela, the father of Africa, stands as the head of the ANC party, with F.W de Klerk as the King for the opposition.

The Knight
For the ANC stands Chief Mangesuthu Buthelezi, Head of the IGP. On the Old South Africa side, Eugene Terblanche, Right Wing AWB Leader.

The Rook
The Jay Naidoo, who led the Trade Union against the Old Government and PW Botha, Former South African President