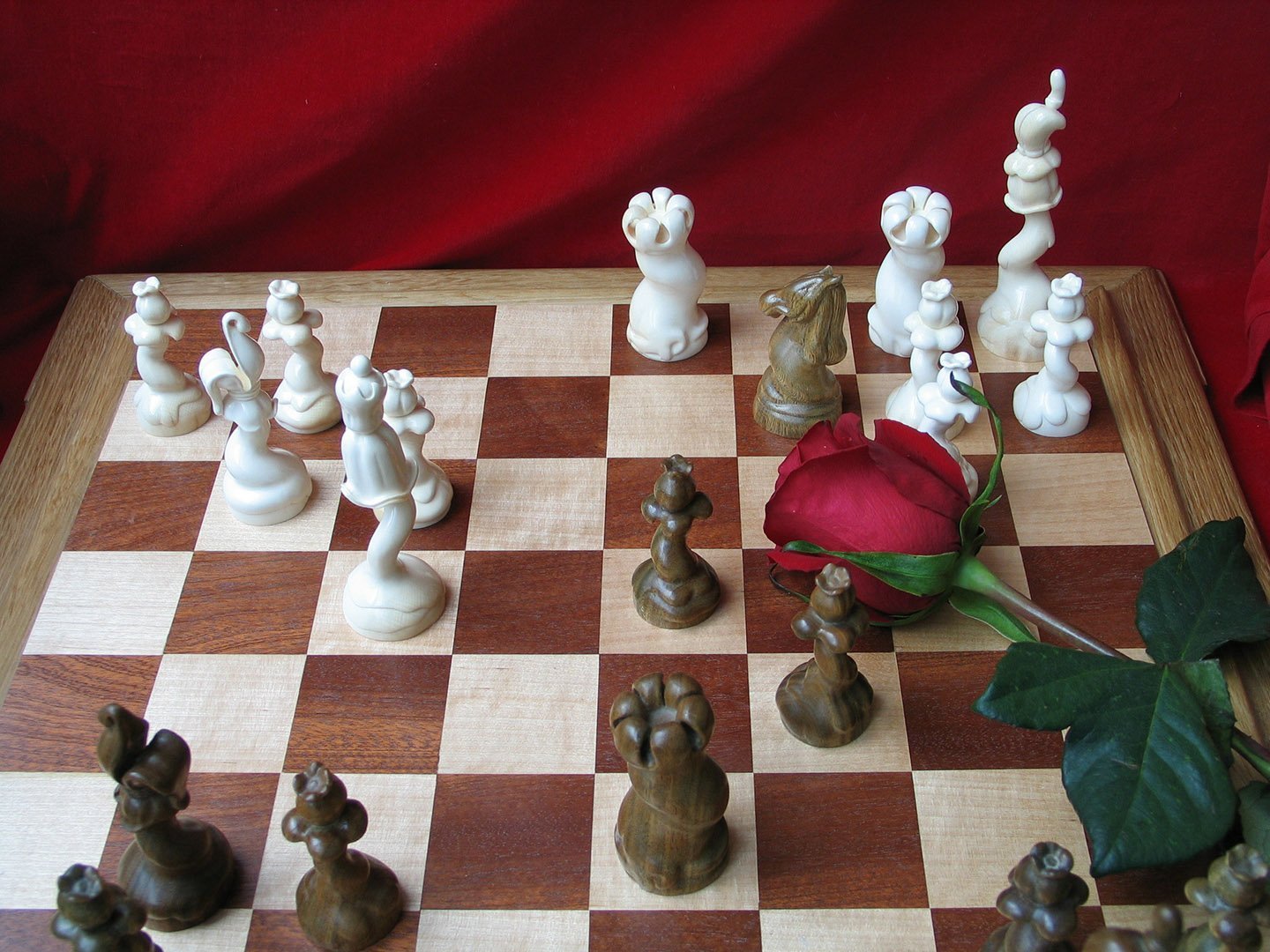 Offered here is a most original and captivating set of chessmen, the beautifully hand-carved Mammoth Flower Chessmen, signed by the sculptor. The White chess pieces are Crafted from 20,000-year old natural and polished Woolly Mammoth tusk, the dark army is crafted from Bokaut, a dense, exotic wood indigenous to Russia and East Asia. The dark army is left natural, showing the beautiful, natural occurring light and dark grain of this magnificent wood. A full Club-sized Chess set, it features a 4-3/4″ King with a 1-1/2″ diameter base. Mammoth tusk is a naturally dense material that does not require additional weighting. The Chess pieces are hand carved and signed “Raikis 03” by crafted by renowned Mammoth artist and sculptor Oleg Raikis.  Since Bokaut and Mammoth Tusk have about the same density, the chess pieces are not weighted and do not have base pads, but rather are left uncovered as has been the praxis for chessmen of this type over the centuries.

Each set is custom created and takes anywhere from 3 months to a year to complete. The design represents a transformation of the classical “Staunton” pattern into floral forms of “Art Nouveau” motifs which were very popular in the high society at the end of the 19th and the beginning of the 20th centuries.

The Mammoth Flower Chessmen consist of 32 pieces. and are in like-new condition. The chess pieces play and display best of a chessboard with 2-3/8″ squares. A fine selection of suitable chessboards can be found here.

Oleg Raikis has a strong affinity with chess, having been an ambitious tournament player in his youth. His love for the game is now an inspiration for his art. Aside from his sculptures, Oleg has designed and created many chess sets. They combine the creative imaginative skill of a master craftsman with the understanding of the practical requirements needed for a set of chessmen to be acceptable as an efficient tool for an ancient Royal game.  Oleg Raikis’ impressive sculptures, carved from hard woods and mammoth ivory, were displayed in the international exhibition, ‘Sculptor 1991’. Since then his work has been constantly on show, including exhibiting in Galleries in Germany, Britain and the States.  Oleg is a member of Russian Federation of Artists, International Federation of Art and Chess Collectors International.