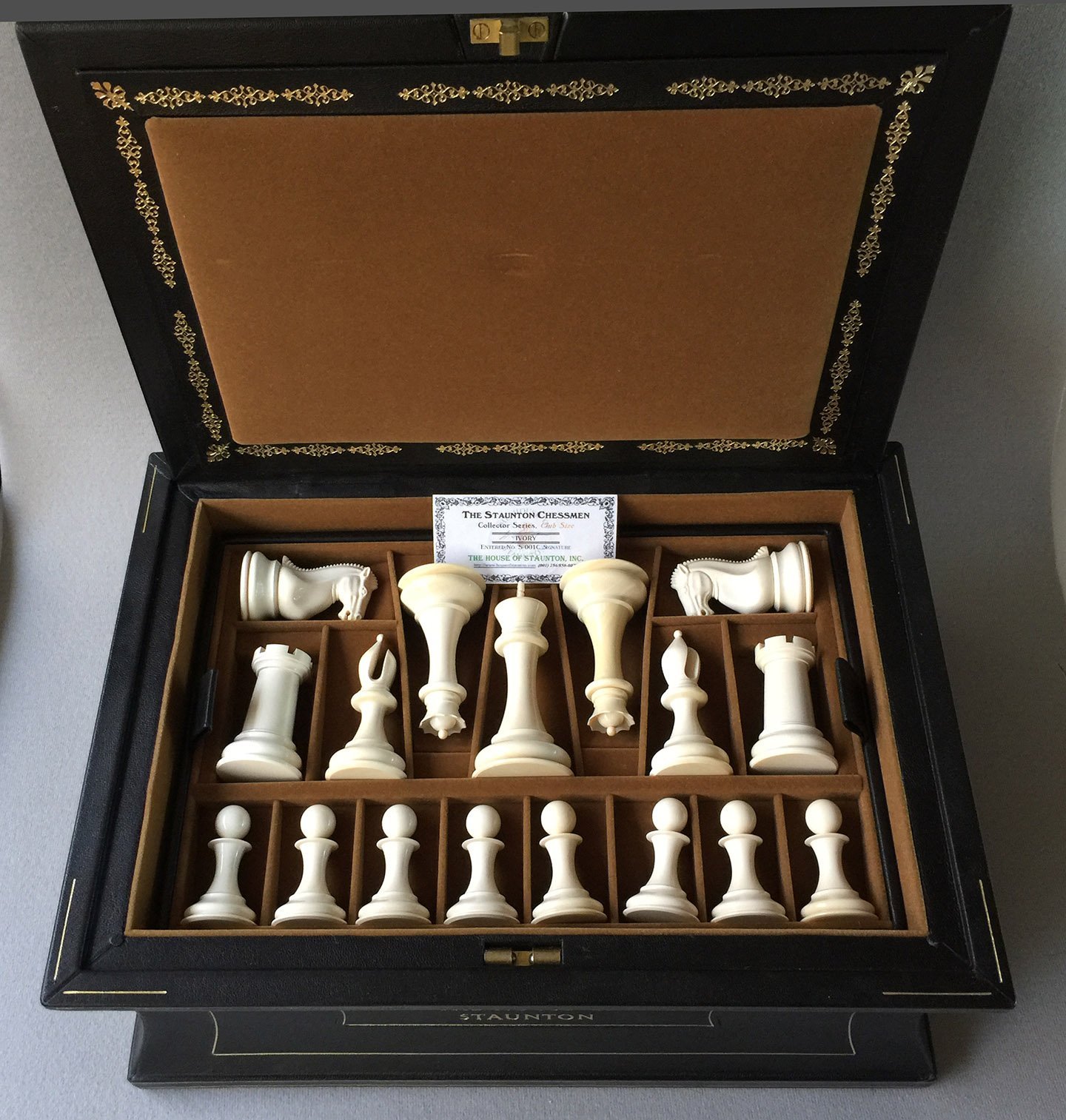 This reproduction is the very first set of Mammoth Ivory 1849 Staunton Chessmen, recreated by noted Staunton authority Frank Camaratta, and offered by The House of Staunton in 2001.  This is set #001! Crafted from 20,000-year old natural and black-stained Woolly Mammoth Ivory, the pieces capture the exquisite design and proportions of the original Staunton pattern Chessmen, registered by Nathaniel Cooke and produced by Jaques of London in 1849.  A full Club-sized Chess set, it features a 4.4″ King with a 2.0″ diameter base. Mammoth Ivory is a naturally dense material that does not require additional weighting. The Chess pieces are hand carved by crafted by renowned Mammoth artist Oleg Raikis and master carver Igor Astafiev. All 34 Chess pieces are crafted from the highest grade of Mammoth Ivory. The dark army has been stained the perfect shade of matte black. The chess pieces do not have base pads, but rather are left uncovered as has been the praxis for ivory chessmen over the centuries.

The chessmen are housed in a luxurious, compartmented, gold-tooled, black leather casket especially designed by Frank Camaratta to protect these heirloom quality masterpieces. The interior and the individual compartments are lined in tan suede leather. The upper tray is removable.

The Mammoth Ivory 1849 Staunton Chessmen consist of 34 Chessmen, including four Queens, an innovation introduced by Frank Camaratta in 1993 which has now become a World-wide standard praxis. This is Chess Set #001 and comes with its original, individually numbered manufacturer’s label. The chess pieces and casket are as new.

The Mammoth Ivory is excavated from the permafrost of the Siberian tundra, which the woolly mammoth inhabited for more than 160,000 years. During the last ice age, the mammoth went extinct as the direct result of rapidly plummeting temperatures. The dry, cold environment of Siberia combined with the massive sheets of ice from the ice age created the ideal environment for the preservation of Mammoth Ivory. The woolly Mammoths have been entombed under the Siberian permafrost ever since, waiting to be unearthed.

For more than 2,000 years, Mammoth Ivory has been traded and it remains a highly prized commodity across the world. While that demand for the Mammoth Ivory has always been higher than its supply, it began its steep rise when the international ivory ban was enacted. This agreement banned all sales of new Elephant or Walrus Ivory, in an effort to protect the animals from extinction. As a result, Mammoth Ivory became the only type of animal-based ivory that is exempt from the international trade restrictions. Over the past few years, the price of Mammoth Ivory has more than tripled, due largely to the unprecedented demand for luxury goods from such emerging countries as India and China. This trend is expected to continue. Less than one percent of the Mammoth Ivory harvested is of suitable quality for the manufacturing of Chess pieces, thus adding the production costs and long-term value.

About the Staunton Chessmen.

The right to manufacture such sets was acquired by John Jaques and he began to supply the retail trade on 29 September, 1849. On the same day, the following advertisement appeared Illustrated London News: A set of Chessmen, of a pattern combining elegance and solidity to a degree hitherto unknown, has recently appeared under the auspices of the celebrated player Mr. STAUNTON. A guiding principle has been to give by their form a signification to the various pieces – thus the king is represented by a crown, the Queen by a coronet, &c. The pieces generally are fashioned with convenience to the hand; and it is to be remarked, that while there is so great an accession to elegance of form, it is not attained at the expense of practical utility. Mr. STAUNTON’S pattern adopts but elevates the conventional form; and the base of the Pieces being of a large diameter, they are more steady than ordinary sets.@ Illustrated London News, September 8, 1849.

Shortly thereafter, the Morning Herald wrote: “A new set of Chessmen has recently appeared under the auspices of Mr. STAUNTON, who, observing their manifest superiority over the old figures in ordinary use, not only as works of art, but in the more practical necessities of convenience, has vouchsafed the guarantee of his name and recommendation. Those who have been in the habit of playing the game will remember the awkward, and inelegant structure of the generality of the shapes which have been in vogue. No artificial feeling until now has ever been brought to bear upon the formation of a pattern which should satisfy the eye both on the score of elegance and propriety.”

And the Morning Chronicle wrote: Mr, STAUNTON, the well-known Chess-player, has associated his name with a new and improved set of Chessmen, of which we have seen a specimen. The chief respect in which these Chess-men differ from the various kinds now in use in this country is that the form of each piece more effectually represents what is intended to be conveyed: as for instance, The King is surmounted by a crown, the Queen with a Queenly coronet, and so in like manner with the other pieces.

The rest is history. The Staunton pattern chessmen quickly became the World standard for serious and casual play. The relatively low production cost brought chess to the masses and did much to popularize the game. Its clean, simple design has never been equaled – the original design looks as modern today as it did upon its introduction over 166 years ago.