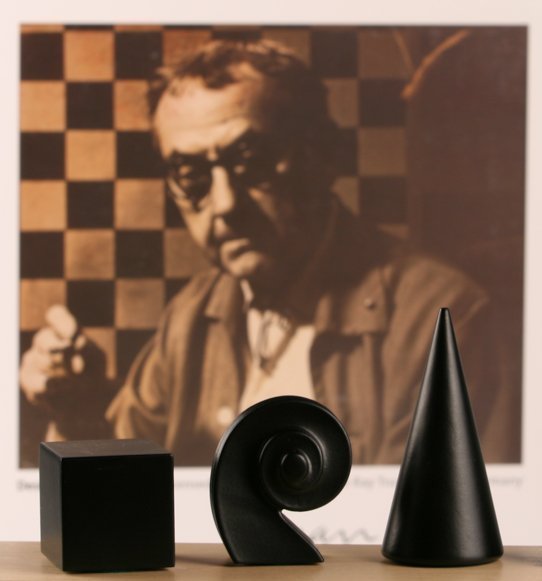 This is a reproduction of the famous Man Ray Chess Set. This is the first work by Man Ray which related to the game of Chess. The King stands 3.3″ tall with a base of 1.6″ square. The chessmen are crafted from solid Beech wood, which is kept natural for the white army and ebonized for the black army. Each of the pieces are represented by “ideal” Euclidean geometric forms. Although abstract, Man Ray still managed to retain their iconic associations. The Pyramid was the Egyptian

symbol for Kingship. The cone was the medieval Queen’s headgear. The Flagon was associated with the Bishop’s tradition of creating exotic liqueurs and spirits.  However, Man Ray just couldn’t resist interjecting one discordant element.  Th Knight was based on the scroll head of a violin in his studio. It also is a geometric, but it is based on the Fibonacci sequence that defines the spiral growth of patterns found in nature.   The chessmen are new in the original box. A matching chessboard is also available for purchase. The chessmen are made in Germany under license from the Man Ray Trust, 2012.

Man Ray ( 1890-1976) is widely regarded as one of the most influential artists of the 20th century. He had a long career in pioneering work in photography, painting and sculpture.

Man Ray was considered a dadist. The Dadist movement primarily involved visual arts, literature, poetry, art manifestos, art theory, theater, and graphic design. It concentrated its anti-war politics through a rejection of the prevailing standards in art through anti-art cultural works. Dadaism was an art movement of the European avant-garde in the early 20th century. The term anti-art, a precursor to Dada, was coined by Marcel Duchamp around 1913 when he created his first readymades. Dada, in addition to being anti-war, had political affinities with the radical left and was also anti-bourgeois.