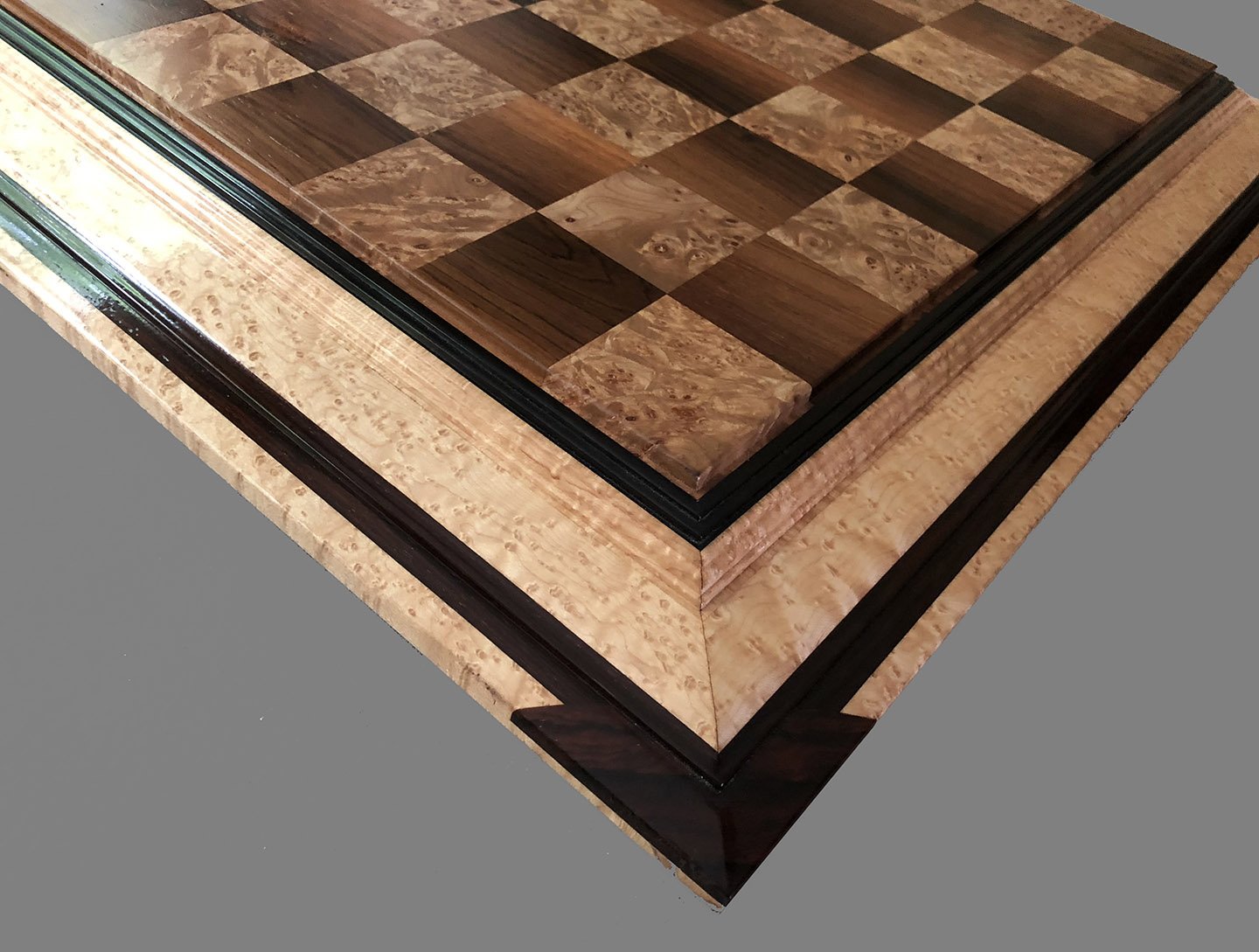 A Walnut and Maple Burl Signature Chessboard with raised 2-1/4″ squares of Maple Burl and Walnut with a solid Birdseye Maple frame and Ebony inalys, corners and delimiter. The chessboard measures 24″ Square. This heirloom quality Chessboard with its unique raised playing field design was designed  and crafted by Bill Lisica. The chess board is in like-new condition and is accompanied by a custom-made protective brown soft cotton slip-case. This premium chessboard, is part of the Camaratta Signature Chessboard Series. Our complete line of Antique, Custom and Luxury chessboards can be found here.

Maple Burl is technically not a distinct species, but is the name of the burl wood from Acer saccharum, more commonly known as Hard or Sugar Maple. A Burl (American English) or bur or burr (UK English) is a tree growth in which the grain has grown in a deformed manner. It is commonly found in the form of a rounded outgrowth on a tree trunk or branch that is filled with small knots from dormant buds. Most burls grow beneath the ground, attached to the roots as a type of malignancy that is generally not discovered until the tree dies or falls over. Such burls sometimes appear as groups of bulbous protrusions connected by a system of rope-like roots. While burls can technically form on any type of tree, certain species are more susceptible to the fungal attacks that produce burl wood. As a result, burls are quite rare. They can’t be produced on command and, hence, are prized for their incomparable beauty.  Almost all burl wood is covered by bark, even if it is underground.

The famous Birdseye Maple of the Sugar Maple, used for the frame of this chessboard, superficially resembles the wood of a burl, but is something else entirely. Birdseye Maple is not technically a distinct species of Maple, but rather, it’s a figure that’s occasionally found in Acer saccharum (Sugar Maple) trees. The eyes reportedly caused by unfavorable growing conditions for the tree. The Maple attempts to start numerous new buds to get more sunlight, but with poor growing conditions the new shoots are aborted, and afterward a number of tiny knots remain.