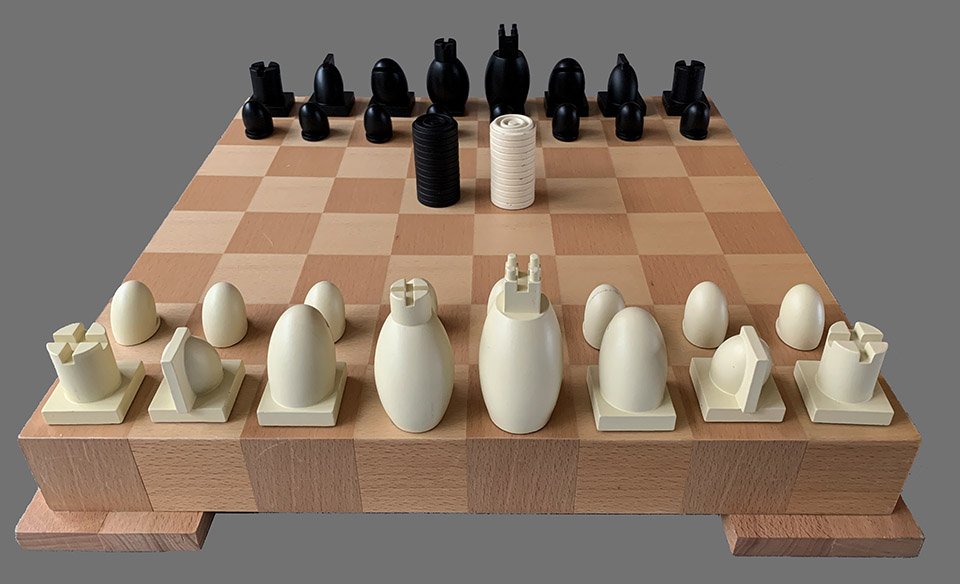 Offered here is the famous Michael Graves Post Modern Chess Set. This chessmen design, with oddly corpulent shapes, is typical of the Graves’ unique design approach created for the Target franchise. The King of this set stands approximately 3 inches tall with a 1-3/4″ base. The chessmen are fabricated with an eggshell white and black composite material. The royal blue felt base pads each bear the Graves signature. The chessmen are snuggly secured in royal blue cushioned slots and are housed in a sturdy wooden box with a removable chessboard veneer cover which doubles as the playing field. The chessboard measures 17″ square (18″ square including the feet) and is 3″ tall.

These chessmen, designed in 2000 as part of the new Michael Graves line of products for Target, have characteristically corpulent shapes which are based on the egg! Here is one of the original sketches of the new chess pieces drawn by Graves.

This iconoclastic design is a classic in the true sense of the word. Graves’ design is best known for its use of the most perfect form in nature – the egg. Fascinating, aesthetic, ingenious. The chessmen possess all these features, yet each one has its own individual character. The set is like new. Smaller, less expensive versions of this chess set were also sold through the Target chain.

It was Graves’ idea to design new versions of classic board games for Target, beginning in 2000 with the most iconic of them all: chess. Graves had been eager to try to improve upon the utopian abstraction of Josef Hartwig’s famous Bauhaus Chess Set, which utilized a series of rigid geometric shapes that represent each piece’s respective moves on the board. Like Hartwig, Graves also sought out a geometric foundation for his design, but one with a decidedly more organic quality that also functioned as the thematic basis for his first line of products at Target: the egg. While avoiding Hartwig’s minimalism by adapting subtle attributes seen in the Staunton chessmen design, there is still an individual peculiarity to these corpulent warriors.

Michael Graves (b. 1934) is a celebrated American architect who studied at the University of Cincinnati and Harvard University. He later taught at Princeton University, where he is currently the Robert Schirmer Professor of Architecture, Emeritus. Among the awards he has received are the 1999 National Medal of Arts, the 2001 Gold Medal from the American Institute of Architects, and the 2010 Topaz Medallion from the AIA/ACSA. Though Graves first earned acclaim as an architect, he later became well-known for the affordable home products he created for Target from 1999-2012.

By the time the chess set designed by Michael Graves first appeared on the shelves of Target stores in 2000, Michael Graves’ name was already synonymous with innovation in architecture and design in the twentieth century. One of the vaunted New York Five group of modernist architects based in New York City in the late 1960s, Graves later rejected the stringent efficiency and severity of modernism for the witty eclecticism and formal freedom of postmodernism, an architectural style he was amongst the first to introduce into the American landscape.

For more about Michael Graves and his unique design philosophy, please click here.