Offered here is a reproduction of the Club Size 1853 Jaques Paulsen Chessmen in Boxwood and Ebony. Each of the chess pieces is heavily weighted and rest atop green English baize base pads. A facsimile Jaques label is included. King 4-3/8″ x2-0″.

Offered here is a reproduction of the Club Size 1853 Jaques Paulsen Chessmen. The chess pieces are Boxwood and Ebony, weighted and rest atop green baize base pads. To add to the accuracy of the reproduction, each of the chess pieces bears a facsimile of the original green registration stickers under its base. The reproduction 1853 Jaques Paulsen chessmen are among the most attractive of all the Jaques’ designs. The King stands an impressive 4-3/8″ tall with a 2″ diameter base. This King height is often referred to as the “Full Club Size”.  The White King is stamped “F. Camaratta U.S.A.” on the rim of the base. The Kings sport gold-embossed Black English Leather base pads. The Kingside Rooks and Knights are stamped with a red crown on their summits. This set of chessmen includes an extra pair of Queens to assist during Pawn Promotion, a feature pioneered by Frank Camaratta in 1995.

This design is a refinement on the original Staunton Chessmen registered by Nathaniel Cooke in March of 1849. Two notable features of these early Staunton designs are the magnificent Knights with their unique upright manes and the open-miter Bishop’s headpiece, an abstract representation of the tongues of a flame, the ecclesiastical representation for Wisdom. The Paulsen Knights are magnificently carved with a very attractive serpentine silhouette. The black Knights are ebony. An interesting factoid, the Jaques Cooke, Morphy and early Paulsen sets used stained boxwood knight heads in place of Ebony. The reason is not entirely clear. A comparison of the original Knights from a set of antique Jaques Paulsen chessmen is shown here.

These chessmen can be also purchased in Natural and Black Lacquer as well as Ivory and Red Lacquered Boxwood. The Boxwood and Ebony 1853 Jaques Paulsen Chessmen include an accurate facsimile of the original green Jaques maker’s label. The box is solid Mahogany, shown is not included, but a suitable premium Mahogany box is available. The chessmen are new. These Chess pieces play and display best on a chessboard with 2-1/2″ squares.  The chessboard shown is not included, but suitable chessboards can be found elsewhere on this site.. A correct period reproduction Jaques antique chessboard can be purchased here. For a complete selection of our finest new and antique chessboards, click here.  For our extensive selection of contemporary and antique chess timers, please click here.  For more on the background of the John Jaques company, click here. For a history of the Staunton Chessmen, click here. 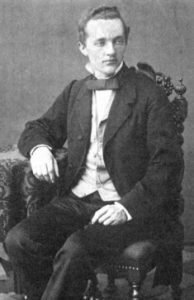 Louis Paulsen was born on January 15, 1833 in Gut Nassengrund near Blomberg, in the Principality of Lippe. Paulsen was a German chess player and a contemporary of American prodigy Paul Morphy. In the 1860s and 1870s, he was among the top five players in the world. He was a younger brother of Wilfried Paulsen.

Louis Paulsen arrived from Germany in 1854 along with his older brother Wilfried and worked as a tobacco broker. He was a relatively unknown player at the time of the 1957 First American Chess Congress, but finished in second place, Although having publicly proclaimed that he would win the tournament, afterwards he praised Morphy’s skills. As such he considered Morphy’s challenge to play any American at odds of a pawn and a move reasonable, even against himself. Paulsen later became one of the strongest player’s in the world and a leading theorist. Both Paul Morphy and Louis Paulsen were capable of playing 10 simultaneous blindfold games with reasonable accuracy.

Paulsen played in the final match of the 1857 First American Chess Congress, losing to Paul Morphy five games to one with two draws. In 1862 Paulsen challenged Adolf Anderssen for the world championship. The eight-game match was drawn and Anderssen remained the unofficial world champion. He finished second place in London, 1862 and took first place at Leipzig, 1877. Paulsen defeated both Max Lange and Gustav Neumann in 1864. He  then proceeded to defeat Anderssen in 1870, 1876 and 1877. An interesting summary of Louis Paulsen’s chess career can be found here.

Paulsen was one of the first players to challenge the notion that a successful attack could be constructed out of brilliance alone. He put forward the idea that any premature attack would fail against correct defense. His ideas were grasped by Wilhelm Steinitz, who declared that attack and defense have equal status. Aron Nimzovitch, listed Paulsen among his six greatest “purely defensive players”.

The House of Staunton was founded in 1993 and incorporated in 1999. When building the House of Staunton, our vision was to create a set of chessmen that captured the feel and exquisite old-World craftsmanship found in those early Jaques Staunton pattern chess sets.  In line with that pursuit, we concentrated on recreating the masterful workmanship of the Bishops and the Knights which were derived from the noble steeds whose visages are captured in the Parthenon frieze (expropriated in 1806 by Thomas Bruce, 7th Lord of Elgin and since referred to as the Elgin Marbles). We also wanted to retain the graceful proportional relationship among the pieces and Pawns. We hope we have been somewhat successful in that pursuit.